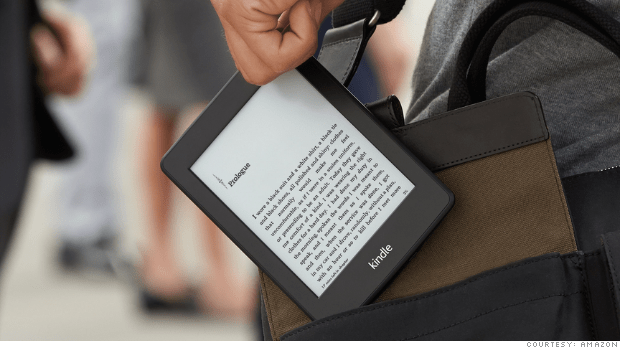 The U.K. Publishers Association has released its latest annual sales figures, recording the first fall in e-book sales (at least, those from traditional publishers) in the seven years they’ve been tracked.

“Digital continues to be an incredibly important part of the industry, but it would appear there remains a special place in the consumer’s heart for the aesthetic pleasure that printed books can bring,” said Stephen Lotinga, the association’s chief executive.

It seems there was a particular boost in physical sales of non-fiction and reference books. Audiobook downloads rose by 29% year-on-year.

Lotinga told Fortune that digital was “very much here to stay,” and he did not believe the fall—which mirrored figures from the U.S.—showed ebook were “going to go into terminal decline.”

“I believe it’s part of a general settling-down in how people choose to consume literature,” he said.

So why did print sales go up? Lotinga put this down to two factors: The publication last year of blockbusters such as Harper Lee’s Go Set A Watchman and E.L. James’s Grey, and big investments from the publishers into lavishly-designed print books, such as the 150th anniversary edition of Lewis Carroll’s Alice’s Adventures In Wonderland. 2015 also saw things like so-called adult coloring books become popular, too.

It should also be noted that, at the start of 2015, a change to EU laws on the tax added to digital products meant e-book sellers such as Amazon (AMZN) had to start levying the U.K.’s 20% VAT rate on ebooks sold in that country, rather than the 3% rate they previously charged due to being headquartered in Luxembourg.

For more on e-books, watch:

But what is actually being measured here? After all, the Publishers Association’s figures do not take account of e-book sales through alternative markets such as Amazon’s self-publishing platform.

Lotinga noted that this was because Amazon does not disclose the figures for that platform. However, he said the association does not believe the self-publishing market is “significantly large” in comparison to the £4.4 billion market described in its report.

Most successful self-published authors, such as James, move on to traditional publishing, Lotinga said, adding, “You’d struggle to find a household name who was self-publishing at the moment.”

However, an Amazon spokesperson said: “Our U.K., U.S. and worldwide Kindle book sales grew in 2015, with particular strength in independent publishing and Kindle Unlimited.”

This story was updated to include Amazon’s statement.