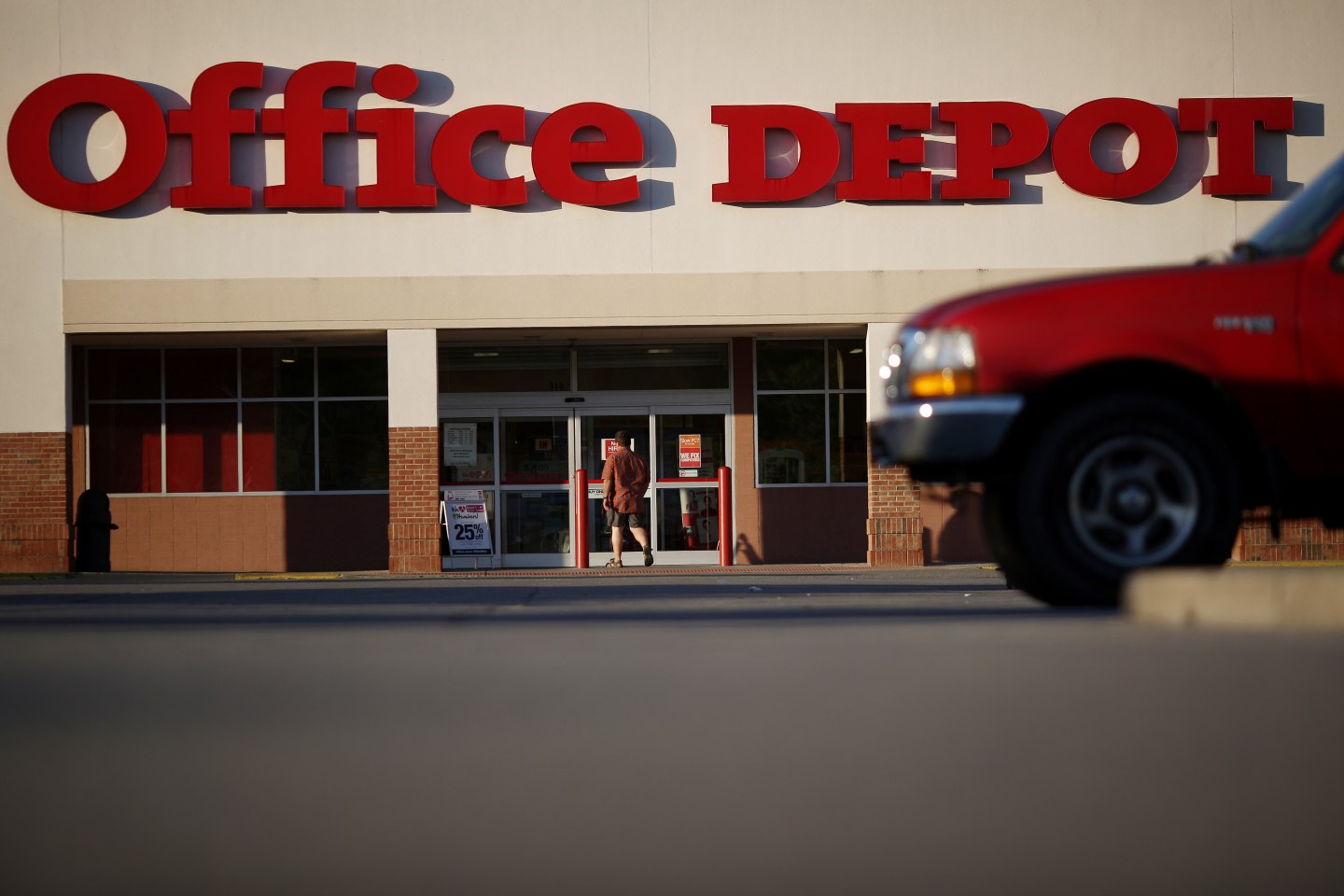 A customer walks toward the front entrance of an Office Depot retail store in New Albany, Indiana, U.S., on Friday, July 31, 2015. Office Depot's next quarterly earnings are expected to be released on Tuesday August 4, 2015. Photographer: Luke Sharrett/Bloomberg
Photograph by Luke Sharrett — Bloomberg via Getty Images

The news that a federal judge has blocked a proposed merger between Office Depot (ODP) and Staples sent Wall Street scrambling, with shares in the two firms plummeting in early trading Wednesday.

The action comes on the heels of several other high profile moves to block corporate mergers, like the scuttled deal between between oil services firms Halliburton and Baker Hughes, leading some observers to accuse the Obama Administration of ramping up its “war on business” in its final months in office.

This sort of handwringing may be a bit overblown, as analyses of Obama Administration antitrust actions have shown that it has not taken a significantly tougher stance against mergers than its predecessors. Indeed, according to a report from CNNMoney, the Obama Justice Department and Federal Trade Commission have taken far fewer antitrust cases to court than the Clinton Administration and only slightly more than the Bush Administration, and this is during a period when merger volume and complexity are only increasing.

Consumer advocates have cheered the Obama Administration’s recent high profile actions against corporate consolidation, and there’s reason to believe they will have more reason to applaud in the months and years to come, especially if Hillary Clinton assumes the presidency next year.

That’s because there’s increasing belief within left-leaning circles that monopoly power is a main driver of rising income inequality. A paper published in October by President Obama’s top economic advisor, Jason Furman, and former Obama Administration official Peter Orszag showed that monopoly power is allowing firms to both hire fewer workers and pay the workers they do hire more than what workers earn at firms without monopoly power. This may be leading companies to hire fewer overall workers, putting downward pressure on overall wages, while also exacerbating income inequality because the lucky few they do employ are making more.

The presumptive Democratic nominee endorsed these findings in an op-ed published in Quartz last fall. “Two-thirds of public corporations operated in more concentrated markets in 2013 than in 1996,” Clinton points out. “Rather than offering better products for lower prices, they are using their power to raise prices, limit choices for consumers, lower wages for workers, and hold back competition from startups and small businesses.”

Clinton promised, as president, to look into using antitrust law to protect worker power against monopoly power. She pledged to “direct more resources to hire aggressive regulators who will conduct in-depth industry research to better understand the link between market consolidation and stagnating incomes.”

And in an environment where the presumptive Republican nominee has threatened to penalize businesses who move jobs overseas with high taxes, it’s not crazy to think there could be a future bipartisan consensus over the idea that the federal government should block mergers not just to protect consumers against higher prices but to protect workers against wage stagnation as well.

The FTC sought to block the proposed Staples and Office Depot merger because it said it would harm large businesses that source office supplies from one of the two companies, not because it thought it would lead to lower wages. Indeed, antitrust law requires that the government argue its case on the grounds that less competition would raise prices for consumers.

But in an age where stagnant middle class income is public enemy No. 1 for both Democrats and Republicans, we shouldn’t be surprised if antitrust law gets a reboot in the years to come.