Michael Moore: My Latest Movie Will Be Seen As ‘Prophetic’ 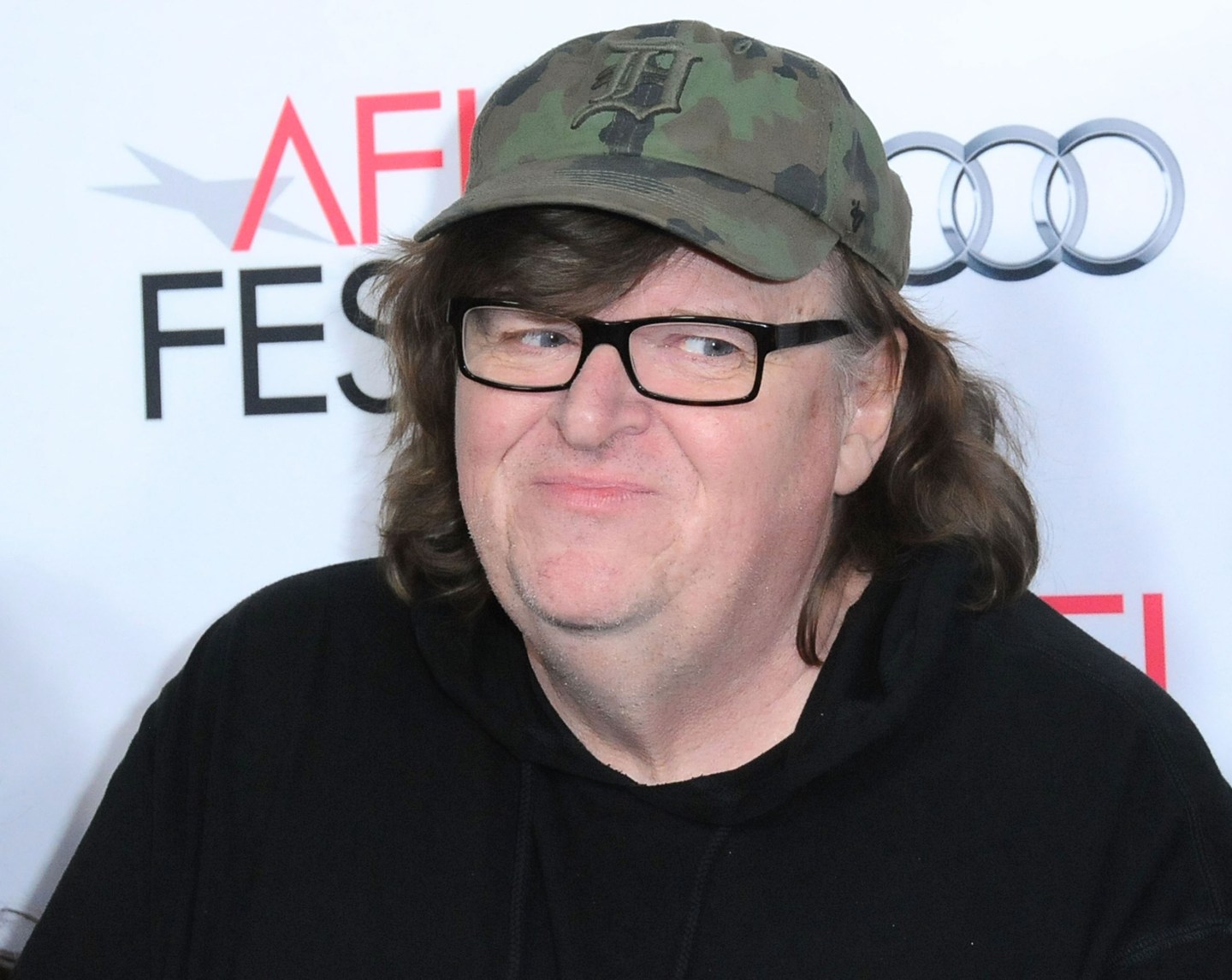 Despite mostly positive reviews, Where to Invade Next showed in relatively few theaters and grossed just $3.8 million, making it Moore’s lowest-grossing documentary since 1998 (his 2004 film Fahrenheit 9/11 is the highest-grossing documentary of all-time, at $119 million in domestic box office). But beginning May 10, audiences will have another chance to see Where to Invade Next, as it is released on DVD, Blu-ray, and on-demand services.

The film represents something of a departure for Moore, who has spent multiple decades making documentaries that call out American business and political leaders, while often advocating for policy reforms in areas such as U.S. gun laws and the healthcare and financial systems.

For Where to Invade Next, though, Moore took the camera outside the U.S. to focus on laws and policies enacted in several foreign countries. In the process, he highlighted school lunches in France, humane prison conditions in Norway, and the benefits afforded to workers in countries such as Germany and Italy, among other stops. The conceit of the film is that he “invaded” each country to claim their best policies for the U.S., leaving moviegoers to decide whether or not they think those ideas could also work in America.

In a recent conversation with Fortune, Moore explained why he made Where to Invade Next and what inspired the film’s format. He also talked, at length, about the upcoming U.S. presidential election. As an avowed Bernie Sanders supporter, Moore’s own brand of progressive, liberal politics would seem to resonate with the Vermont Senator’s impassioned backers. But, Moore thinks the “word of mouth” around Where to Invade Next will cross party lines and he said he can even envision himself winning some new fans from GOP frontrunner Donald Trump’s camp.

FORTUNE: How did you come up with the idea for this documentary?

Now, give them two hours of not ‘pie in the sky’ stuff, not dreamy Democratic-Socialism stuff—just [policies that have] been enacted and that have been in place for, in some cases, decades in these countries—decades meaning that, when they started they may have had problems, but they’ve worked all of the bugs out. They’ve worked the bugs out so that it runs like a smooth machine.

So, the conceit of the film is that [these countries] have already done the trial and error, they’ve done the research, the R&D, for how to do daycare, for how to do a prison system where you don’t have a high recidivism rate. They’ve figured this out, so let’s just go steal their ideas. That way, we don’t have to do any of the research, because they’ve already done it.

How did you pick which countries and policies to highlight?

A lot of it was just throwing darts on a map. Some of the stuff I’d heard about. Some of it was, “Let’s just fly over there, rent a van, and see what we find.” That’s why, so many times in the film, when you see that ‘What the f—k’ look on my face, it’s because I’m hearing for the first time. We didn’t do all of this research where we knew in advance that Italians get [paid vacation days for their honeymoon]. That look on my face when they’re telling me that, that’s not acting. That’s real.

I felt the movie worked so much better that way, with me not knowing a lot of what I was going to find out. I’d heard about the drug thing in Portugal. I didn’t realize it was 15 years [of decriminalized drug-possession]. I thought this was a new thing. And, they’ve seen their drug crime go down.

Were there any countries or policies that you wanted to film, but couldn’t for any reason (budget, time, logistics, etc.)?

We did film three countries that are not in the movie, just because I do not believe movies should be longer than two hours. [Editorial note: Where to Invade Next has a runtime of one hour and 59 minutes.] I’ll probably put them up on the Internet some day. We went to Estonia. The [smallest] number of women die in childbirth in Estonia than any other country. In American cities, you have a three times greater chance, as the mother, dying in childbirth than you do in Estonia.

We went to Austria, because they’ve lowered the voting age—as have half a dozen other countries—to 16, to see how that works to get teenagers involved politically at an earlier age. And, they’ve had great success with that. And, then we went to Canada to see how they vote, and how they run their elections—very different from ours.

A lot of the policies you’ve highlighted—higher taxes, better wages and conditions for workers, free college education–are right in line with what Bernie Sanders is advocating. You’ve publicly endorsed Sanders’ presidential campaign. What are your thoughts on the campaign and what it has meant for the Democratic Party and the country as a whole?

Well, a Democratic-Socialist has won 45% of the pledged delegates. And, that’s amazing. Tens of millions [of people] have been exposed to his ideas and heard these ideas for the first time. If they see my movie, they’re actually going to see these ideas in action in these countries.

Do you think Sanders is pushing the party in a more progressive direction, whether he gets the nomination or not?

I think [Hillary Clinton has] already adopted a lot of his policies. And, this has been a positive thing. I think that we have a chance to get some of this stuff, even with Hillary.

Some are saying that the same anti-establishment sentiment behind Sanders’ rise is fueling Donald Trump’s popularity. What’s your thoughts, and do you think Trump supporters will enjoy your film?

Oh absolutely. I think the reason why Trump won Michigan, and the industrial states that he’s won, is that he is saying things that appeal to the people where I come from. [Note: Moore is a Flint, Mich. native.] When he tells Ford (F), ‘If you close that factory in Michigan and move it to Mexico, you’re going to pay a big tariff on any cars you bring back.’ That’s music to people’s ears. When he tells Apple (AAPL), ‘You’ve got to start building those iPhones not in China but here.’ That is populist talk and that is stuff that the working class is going to pay attention to. Of course, that doesn’t mean they’re going to vote for him, because he’s a racist, and a sexist, and a homophobe, and everything else.

What is the likelihood that some of the ideas you explored in Where to Invade Next could be adopted in the U.S.?

I do think we’ll have paid maternity leave very soon in this country. I think something’s going to be done to deal with the enormous college debt and student loan situation. The war on drugs, as we know it, is going to end and we’re going to stop the mass-incarceration of a certain race of people. I think that that has a good chance of getting corrected here in the coming years.

I think a lot of things in the film are on their way to happening and, if we were to have this conversation five or 10 years from now, I think the film will look somewhat prophetic.

How do you feel about how the movie was received by critics and how it fared at the box office?

We live in 2016. People are seeing films in a different way than they were 10 or 20 years ago. If you speak of it in relative [terms], if you compare apples to apples, it’s [among the highest-grossing American documentaries] of the last two years.

And, Indiewire has it ranked as the sixth-highest grossing indie film so far this year [including all genres of independent film]. On that level, if you compare it like that, yes, it’s done fine. It’s been in [308] theaters across the country. Documentaries don’t get that distribution these days. I’m very happy about that.

Do you think it will do well in terms of digital sales and on DVD/BluRay?

Yes. I think word of mouth on this is already strong—it’s going to be very strong. It’s a very subversive movie and people are going to pass it around and tell people they’ve got to see this thing, because you’ll sit there for two hours with your jaw open like ‘You’ve got to be kidding me. How come we don’t have this?’ Over and over and over again.