Hulu Pitches Itself as a Netflix With Ads 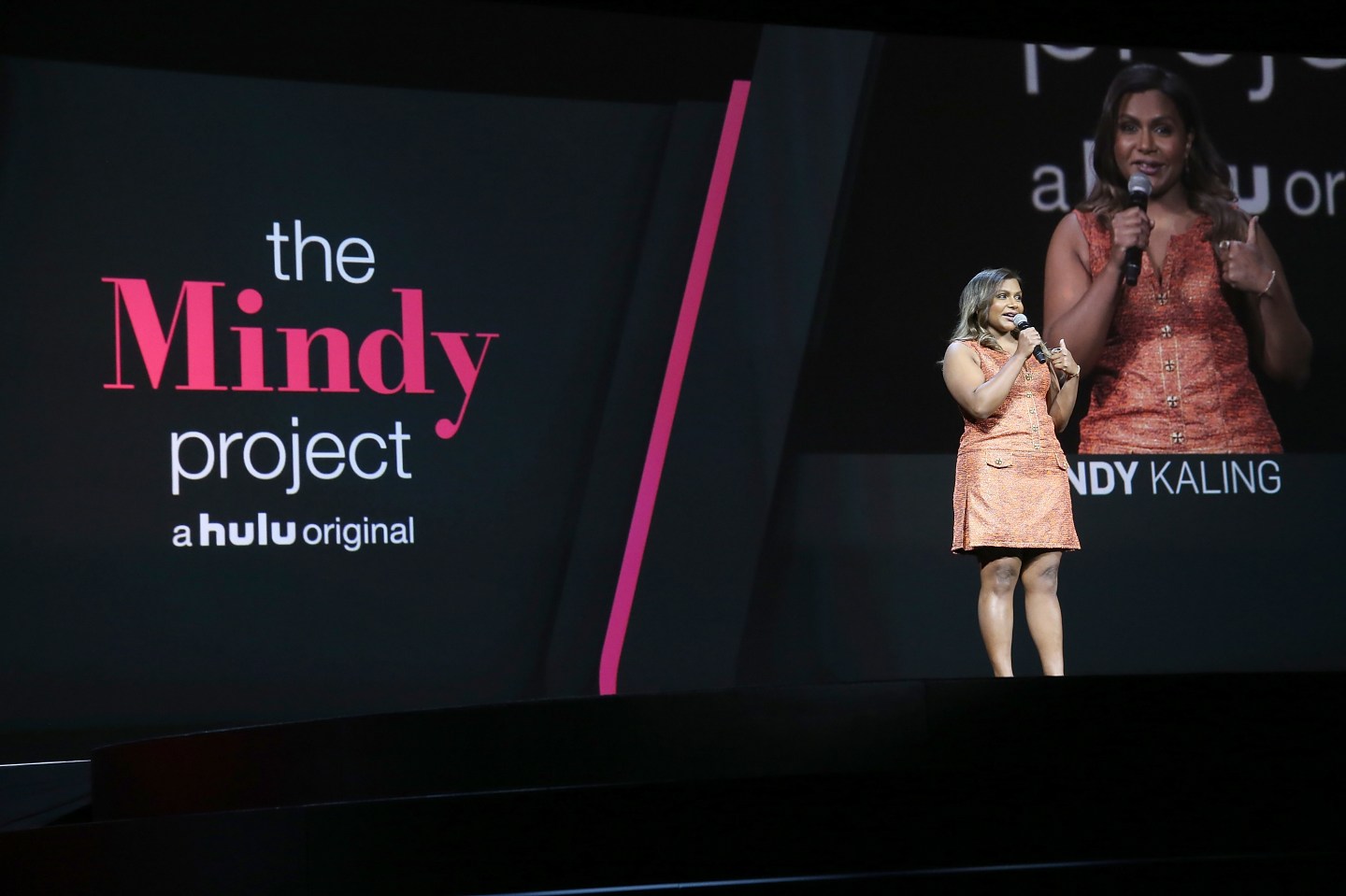 The cord cutting trend is scary for TV networks and cable companies, but it’s even scarier for advertisers. In a cord cutting future, where TV viewers ditch their cable subscriptions for services like Netflix (NFLX), YouTube Red (GOOG), HBO Now, and Amazon Prime Video (AMZN), viewers don’t watch ads. What’s more, if they’ve paid for a streaming subscription, they expect shows to be ad-free.

If people, especially young people, are watching TV without ads, how will advertisers reach them? Today streaming service Hulu pitched itself as the solution to that conundrum.

At an event Wednesday as part of the Digital “NewFronts” series in New York City for advertisers, Hulu showed off its upcoming slate of shows. Abbi Jacobson and Ilana Glazer of Comedy Central’s Broad City hosted; Kaling, Amy Poehler, Hugh Laurie, and Aaron Paul added star power to the presentation.

It was clear that Hulu is following the content acquisition playbook of competitors Netflix and Amazon Prime Video. Like those services, Hulu is paying big stars to create their dream projects without the creative restraints they get from traditional TV networks. Kaling, whose show, The Mindy Project, was cancelled from Fox and picked up by Hulu, declared that she was nervous to leave a traditional broadcast network, “but the streaming life is pretty sweet.”

“We no longer have network censors stopping us from saying words like ‘tits,’” she joked, adding, “People can watch the show the way it was meant to be watched – on your laptop while you’re sitting on the toilet, or on your phone during a relative’s funeral.” (A Hulu exec helpfully noted that 70% of viewers watch Hulu in the living room on a TV, noting, “We’ve put the TV back in the TV.”)

Further, Hulu has acquired the rights to a number of current shows like Broad City and older catalogs like Seinfeld. It’s added movies and is commissioning documentaries, like the upcoming Eight Days a Week, an authorized Beatles documentary directed by Ron Howard.

The key differentiator, Hulu’s executives explained to an audience full of advertisers, is that unlike its streaming competitors, Hulu has ads! All kinds of ads! There are regular commercial breaks, which advertisers don’t pay for unless they’re watched in full. (It sounds like a great offer until you realize Hulu’s ads can’t be skipped.) There is product integration, like recent partnerships with Goose Island beer, Microsoft Surface, and Lexus. (“Oh yeah, I integrate,” Kaling boasted of her Lexus episode. “I will deliver a baby with a PBR in my hand.”)

The question is how long till users get tired of the ads on Hulu and either pay the extra $4 a month to avoid them, or go elsewhere. There’s no shortage of great TV out there, and no shortage of places to watch it.

Hulu, which is jointly owned by NBCUniversal (CMCSA), 21st Century Fox (FOX), and Disney (DIS), already has a solution for that. The company announced it will soon offer live broadcasts, including sports, events, and cable TV shows as they are aired. That cable-like package, which was reported earlier this week by the Wall Street Journal, will cost $40 per month. The company provided no additional details about which the package will include. Hulu’s push into live TV takes it beyond the purview of ad-free, on-demand competitors like Netflix and Amazon Prime.

Hulu now reaches 30 million people each month. In the last year, its total streams increased by 79%. Hulu CEO Mike Hopkins declared that 2015 was “a breakout year” for the service, and that the company’s theme for 2016 is “bigger and bolder.” It’s a clear appeal to advertisers that are worried about losing their access to the large TV audiences that are increasingly shutting them out. With the addition of live broadcasts, especially sports, Hulu might have a chance at successfully blending paid streaming subscriptions with ads.