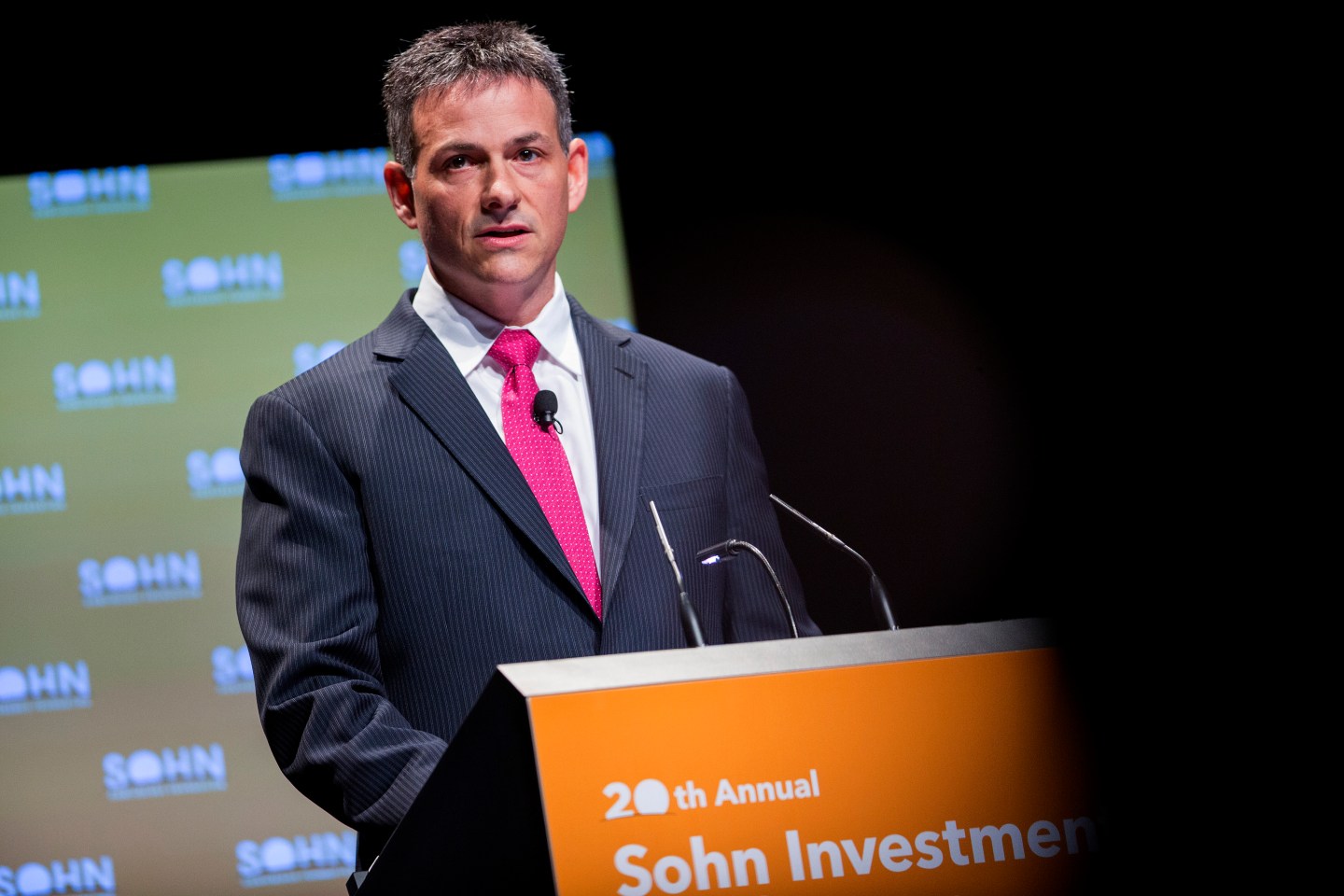 Nearly two decades after trading his hedge fund’s first stock, Greenlight Capital founder David Einhorn has set his sights on some of the biggest American companies. Both of his top investment ideas—one stock that he is investing in and another that he is betting against—are in the top echelon of the Fortune 500, Einhorn said in a presentation at the Sohn Investment Conference on Wednesday.

He began with announcing that he is betting against Caterpillar (CAT), No. 54 on the Fortune 500. That’s not entirely a surprise. Back in February, Einhorn suggested he was shorting heavily equipment manufactures, but didn’t say which ones. The bet against Caterpillar was driven by his views that its target markets are either suffering or dying. The mining industry, for one, has yet to hit bottom after the collapse in natural resource prices in the last few years, while global coal usage is likely to decline forever, Einhorn said.

On the flip side, Einhorn was bullish on General Motors (GM), No. 6 on the Fortune 500, saying the car manufacturer and its shareholders needn’t worry much about competition from ride-sharing companies like Uber—fears that have been a drag on the stock.

Caterpillar’s stock price fell nearly 3% during trading on Wednesday but dropped another 1% after-hours following Einhorn’s presentation. GM’s shares, which had fallen 2% during the day, rose by more than 1% in after-market trading.

Here are Einhorn’s key arguments about each stock:

On Caterpillar: Caterpillar’s shares currently trade at $74, but Einhorn thinks they will be worth less than half of that price in 2018, when he expects the stock to hit bottom. Its earnings will plummet as demand for its bulldozers, heavy trucks, and other commodity production equipment will keep shrinking as the mining industry continues to slide, Einhorn said. And coal, which is Caterpillar’s most profitable market in the U.S., according to Einhorn, is in even worse shape: “We don’t see a return of large scale capital investment in U.S. coal mining, maybe ever,” he said.

On GM: Investors are concerned that Uber and similar ride-sharing services will make Americans never want to buy cars again, which has caused GM’s shares to trade at just five times earnings—an absurdly cheap valuation given it’s a fraction of the S&P 500 average. But Einhorn said the concerns are overblown, a sign of Wall Street being Wall Street. “People who predict this tend to work in tall buildings,” where it’s easy to order an Uber on your phone to pick you up in a few minutes, Einhorn said. “We don’t think ride-sharing will have a material impact on auto sales for many years, if ever.”

While Caterpillar’s shares are trading at a much higher valuation than GM of 22 times earnings, Einhorn said he thinks the stocks should eventually trade places when the market comes to its senses. Pointing to a cartoon caption in his slide presentation, he said, “You’ve got the damn thing inside out.”