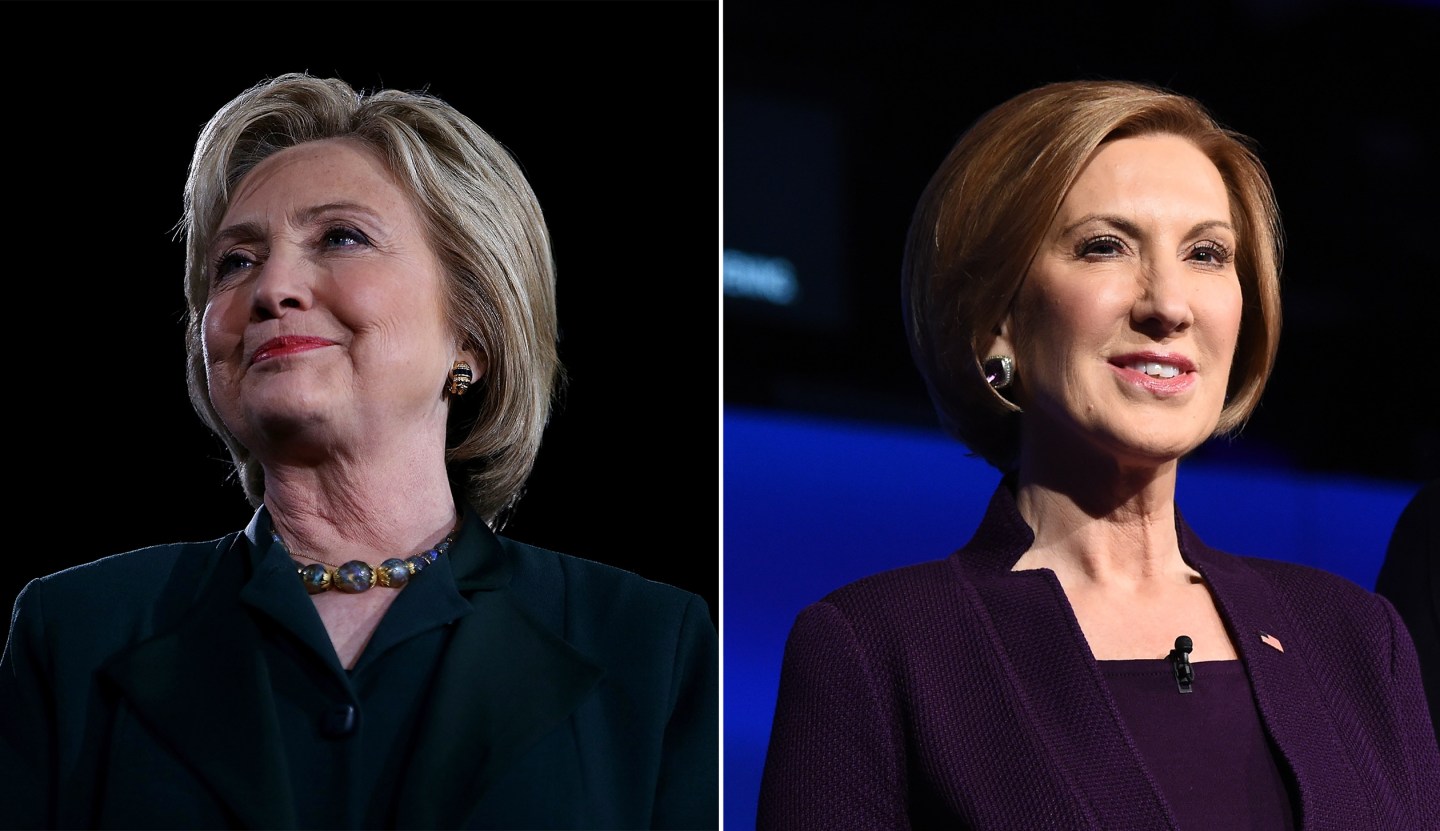 This story originally appeared on Motto.

On Wednesday, former Republican presidential candidate Carly Fiorina joined Ted Cruz’s campaign as his running mate. The real race is on, with some speculation that Fiorina was brought onto the ticket as a “woman card” to rival Hillary Clinton as she continues to lead the Democratic race.

Fiorina has deliberately set herself up against Clinton in the past, saying at a past Republican debate that Clinton “will do anything to gain and hang on to power” and making comments about Clinton’s marriage. A Republican strategist told TIME in 2015 that Fiorina would be a strong candidate because of her ability to take on Clinton: “The most effective way to criticize a woman is to have another woman do it.”

We have history in the making as these two women vie for the top two jobs in the nation. The United States has never had a female president or vice president—and women hold only 20% of seats in the Senate and 18% in the House.

See how Clinton and Fiorina compare on various women’s issues:

Clinton: Clinton is pro-abortion rights and a supporter of Planned Parenthood, although in a March 2016 town hall, she said she supports some regulations on later-term abortions. In a Democratic debate in April, she said that the right to choose “goes to the heart of who we are as women, our rights, our autonomy, our ability to make our own decisions.”

Fiorina: Fiorina has said she’s anti-abortion. While on the campaign trail in 2015, Fiorina supported defunding Planned Parenthood, citing controversial footage of alleged abortion practices. She attributes her anti-abortion stance to her experience earlier in life accompanying a friend to a Planned Parenthood clinic.

Clinton: Clinton has long been an advocate for equal pay, calling it “an economic growth issue.” She wants to create more incentives for states to encourage employers to adopt equal-pay policies. As a Senator, she was a cosponsor of the Lilly Ledbetter Fair Pay Act.

Fiorina: Fiorina also believes in equal pay, saying that it has been a serious issue for women. To address this, she believes that employers should dismantle the “seniority system,” which rewards employees for time served, not for merit. She said in April 2015: “We don’t need increased regulation to address this issue; we need flexibility for employers. … This structure systematically disadvantages women and must be reformed.”

Clinton: When Lena Dunham asked Clinton, “Are you a feminist?” in her inaugural Lenny Letter, the candidate responded: “Yes. Absolutely. I’m always a little bit puzzled when any woman, of whatever age but particularly a young woman, says something like, ‘Well, I believe in equal rights, but I’m not a feminist.’ Well, a feminist is by definition someone who believes in equal rights!”

Fiorina: Fiorina gave a speech on feminism in July 2015 in which she said: “Today, only 23% of women identify with the term feminist. Liberal ideas aren’t the answer. Their version of feminism isn’t working. It is time for a new definition. … A feminist is a woman who lives the life she chooses. We will have arrived when every woman can decide for herself how to best find and use her God-given gifts. A woman may choose to have five children and home-school them. She may choose to become a CEO … or run for President.”

ON CHILD CARE AND FAMILY LEAVE:

Clinton: Clinton supports paid family leave for 12 weeks and proposes that the wealthy should be taxed to pay for it. She also wants to invest in and expand existing programs to allow for universal preschool and child care for those who need it. “Funding for these opportunities has not kept up with changing times and rising demand,” she said in 2015.

Fiorina: Fiorina says that she supports paid family leave but does not believe that it should be a government mandate. “I don’t think it’s the role of government to dictate to the private sector how to manage their businesses,” she said to CNN.