Shocking Myself Awake With the ‘Shock Clock’ Alarm 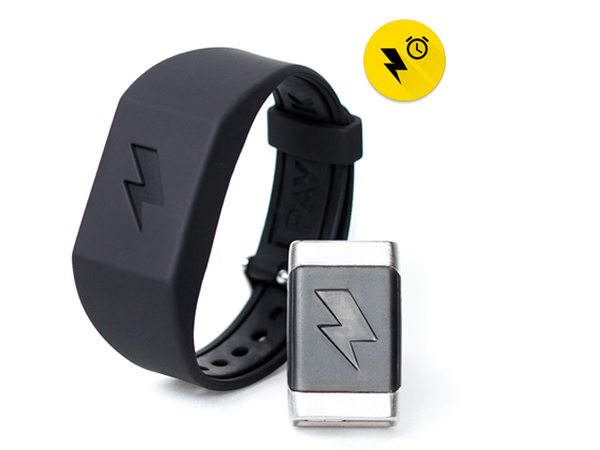 If you’re not a “morning person,” then you understand the feeling of desperately wanting to be one. To night owls like me, morning people are an alien life form which cannot be understood or explained. The world runs on their time. I feel spite and envy toward them and the world in which they thrive.

I’ve tried all manner of tricks, from apps that track REM cycles to vibrating pillows and blue-light-blocking sunglasses. I bought the Clocky runaway alarm clock only to retire it when I returned from a trip to find a very distressed Clocky stuck in a corner of my apartment. The little guy had been darting around on full blast all week, and it felt like I’d committed a form of robot abuse.

But abusing myself in the quest to wake up in the morning? Yes please. For the past week and a half, I’ve tested out the Shock Clock Wake Up Trainer. Shock Clock is the latest creation from Pavlok, a wearable device startup founded by Maneesh Sethi, a blogger who became Internet-famous when he hired a woman to slap him every time he mindlessly opened Facebook. The company is promoting its new alarm product with a campaign on Indiegogo, the online crowdfunding platform.

People have used Pavlock to quit habits like biting their nails or smoking. ShockClock is the company’s foray into getting our sleepy bums out of bed. “You have an internal clock and your body decides whether it wants to abide by the internal clock,” says Sims McGrath III, Pavlock’s director of marketing. “The shock clock forces your body to abide by it.”

Once I set up the bracelet, using Bluetooth to pair it with a corresponding app on my smartphone, I zapped myself with a test shock. Users can choose the strength of zap; a medium-strength shock was plenty of shock for me. I let out a surprised “Ah!” at the zap, even though it was self-administered. The shock isn’t painful, but it is an unpleasant feeling.

As I prepared to go to bed, the only thing I could think about when I looked at the bracelet was not wanting to feel another shock. It was the same tension and dread one might experience looking at a giant needle at the doctor’s office.

You can set the alarm in a variety of combinations; I chose one that beeps for a few seconds, then vibrates, then zaps. It’s meant to motivate people to get up and turn off their alarm before they get shocked. That’s the carrot, but you can also choose the stick: ShockClock can also be set to shock you when if you hit the snooze button.

In the end my dread of the zap was not necessary; I slept right through it. I’m a deep sleeper.

The ShockClock worked on mornings when I was already partly awake—if my normal alarm had already gone off, if my significant other was already up, or if my sleep was interrupted by noise outside. I felt the vibration, then the beep. On a few days, I avoided the shock, turned off the alarm, got up, and felt like a champion. On others, my sleepy brain was crafty enough to avoid the shock. With one eye half-open, I simply removed the watch, tossed it aside, and hit the snooze button. Merely wishing to be a morning person is not enough. Your subconscious has to be on board, too.

On the mornings I didn’t move fast enough and got zapped, I was always surprised by how painless it was compared to the feeling I’d been imagining. The idea of the shock is more powerful than the actual shock. That, or I was still half-asleep.

I have had more luck using the Pavlock unit to fix other bad habits in my life—namely, the office snack bar. Whenever I crave a giant handful of dark chocolate M&M’s covered in peanut butter (eaten with a spoon like it’s soft serve ice cream, don’t judge, you’d do it too if your office had fresh peanut butter on tap), I zap myself. There is something twisted about this kind of masochism. I feel like Silas, the Opus Dei monk from “The Da Vinci Code,” and Pavlock’s orange rubber bracelet is my cilice. A more accurate metaphor might be a dog with a shock collar. Every time I go near the snack bar my shock collar jerks me away.

There is a reason dog shock collars are popular—they work. I now associate my bowl o’ PB&M&M with the unpleasant feeling of a shock, and it holds less appeal. Unlike dogs, which sometimes build up the rebellious courage to bound through the electric fence to freedom, I can take the bracelet off and the craving is still diminished.

My half-asleep self doesn’t have that kind of control, but I made peace with that reality years ago. Becoming a morning person may not be realistic goal for some of us night owls.