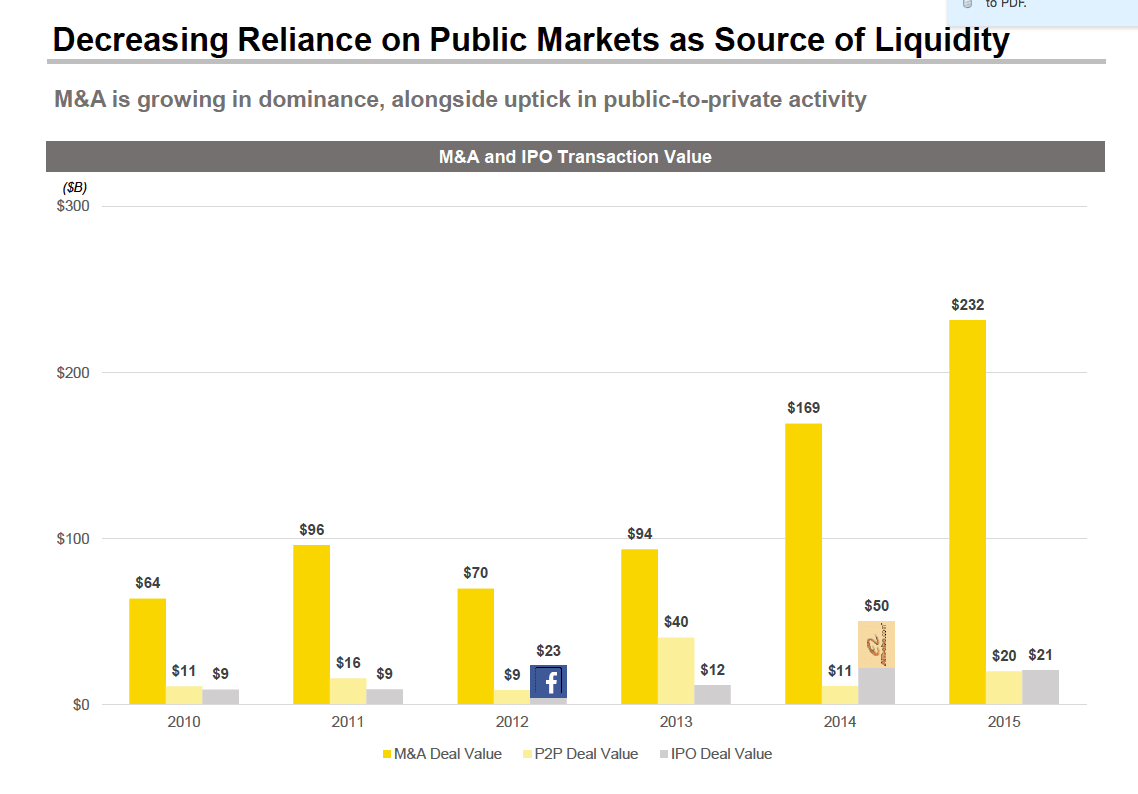 Experts expect the value of tech companies going private could top the value of tech IPOs this year. Last year $20 billion worth of tech companies went private, according to data from Bulger Partners, an M&A advisory firm. Meanwhile, tech IPOs only raised $21 billion. Take-private transactions topped IPO values in three of the last six years (four if you take out Facebook’s IPO). The trend isn’t surprising, “given how much everyone complains about the burden of being a public company and how much money is swirling around the private equity landscape,” according to Bulger Partners managing director Doug Melsheimer.

Bill Gurley, a venture capitalist with Benchmark, last week summed up the hopes and fears that have been hanging like an Eeyore cloud above the San Francisco Bay area for the past few months. In a blog post, he argued that tech unicorn CEOs should get over their fear of the public markets. IPOs are good for companies—just look at how well Mark Zuckerberg has fared, he posited. And they’re “the best way to ensure the long-term value of your [and your employees’] shares,” he wrote. No mention of your investors’ shares, like, say, the ones owned by your old friends at Benchmark. Sarah Lacy at Pando argued Gurley’s blog post was an open letter to Gurley’s portfolio company Uber.

Fortune journalist Carol Loomis used to joke that there were only two kinds of stories at Fortune: “Oh, the glory of it!” and “Oh, the shame of it!” The narrative of Silicon Valley’s billion-dollar startup “unicorns” is no exception to that rule. First, there was the glory: Fortune declared the Age of Unicorns in January 2015. Then, the shame: This January we bemoaned the IPO drought and wished the unicorns “good luck” going public.

On Friday, the sole tech IPO of 2016 (so far) made its debut when Dell spun out its SecureWorks’ security software unit. It was a “dud,” and also “lackluster.” The IPO window is indeed closed for tech companies. Meanwhile, public tech companies are getting beat up, even when they report positive earnings. No wonder so many of are opting for the private markets.