What It’s Like Trying To Get Online in Cuba 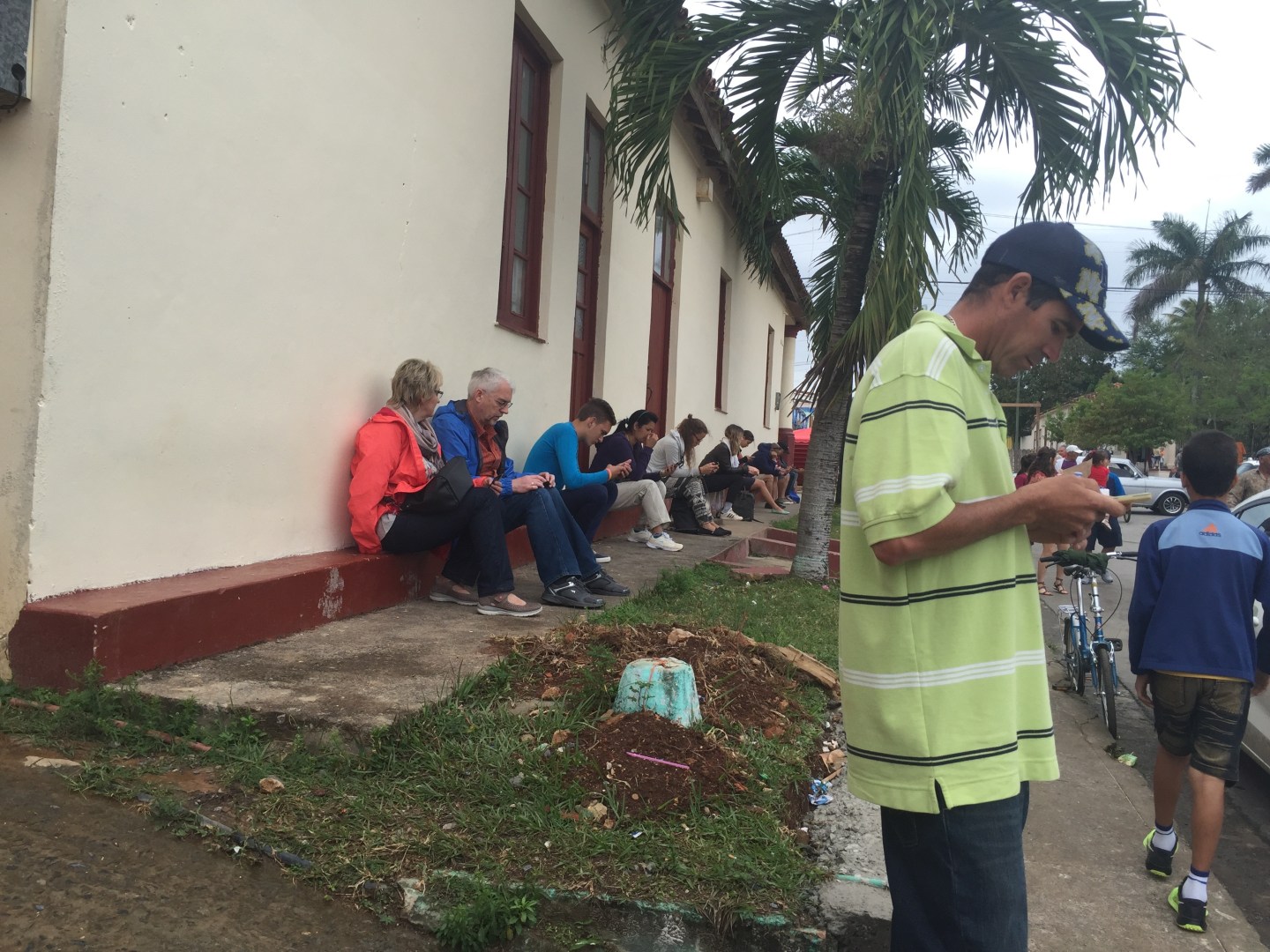 Cuba is a great place to break your phone addiction. I learned this the hard way when I traveled to the country for three days to report on President Obama’s historic visit. (For more on the trip, read “How Airbnb Pulled Off a Coup in Cuba.”)

When I leave for Havana, I set up my out-of-office message to boldly declare that I will have no access to email for the next three days. Not “checking intermittently,” not “slow to respond.” No access. None.

Over the next 24 hours I repeatedly, mindlessly pick up my phone and fire up Instagram, Twitter, Facebook, Outlook, or Slack, only to realize there is nothing new for me there. Each time, I put the phone down, embarrassed at my inability to exist for half a second without digital stimulation. Then without thinking I do it again the very next second.

By day two I’ve trained my brain to stop asking for its pacifier, but I need to get some work done. Despite Cuba’s widespread lack of Internet, there are ways to get online. In 2015, the Cuban government set up 35 Wi-Fi hotspots across the country.

This is how 4,000 Cubans have listed their homes on Airbnb, and how a small group of Cuban startups are building their businesses. One of the “fixers” that arranged my travel tells me to try out an Internet kiosk on a street called La Rampa. People don’t get on the Internet in Cuba, my fixer friend says. They “go to Internet.”

To get online, you have to buy a little piece of paper with a login and password. How hard could that be?

Finding the Internet spot is easy enough. On one block of La Rampa, a tree-lined street of college campus-style buildings, dozens of people crouch on a sidewalk ledge, gazing intently into smartphones, tablets and laptops. It’s the first time I’ve seen anyone stare at a smartphone since I arrived. (More conspicuously missing from Cuba: modern cars, skyscrapers, billboards.)

An even bigger crowd gathers around a tiny metal shed nearby, with paper cards that say Recarga scattered around them on the ground. I join what I think is a line to buy Wi-Fi access, and immediately a man begins talking at me. The only part I understand is “la ultima,” which means “the last.” “Si,” I say with a smile. “Estoy la ultima.” I am last in line. He shakes his head and walks away.

Eventually, after walking away, coming back, and allowing several very stylish groups of teens to cut in front of me, I get to the front of the crowd. I put my face up to the one-inch crack in the shed’s tiny window. The air inside is freezing cold from an industrial air conditioner and thick with cigarette smoke. “Una ahora,” I declare, and in return for three CUCs (Cuba’s tourist currency, which is tied to the U.S. dollar), a lady sitting a card table gives me a tiny piece of paper. It says I can “enjoy 1 hours Internet access.” Information highway, but mostly Instagram, here I come.

I perch on the sidewalk ledge, crack open my laptop, join a network called “WHnacional” and wait. The spinny wheel of death appears and then disappears and then reappears. I turn Wi-Fi on and off. Five minutes, or 5,000 years in Waiting For Wi-Fi time, go by before I finally join the network.

I enter the 12-digit user name and 12-digit password from my paper slip and wait. The operation fails. I type it in again. And then again. I realize I should have charged my laptop for this. Eventually the spinny wheel stops. I have been rejected. I enter my user name and password three more times, each time more determined.

A gust of wind blows my slip of paper into a giant mass of palm shrubs and I crawl through to find it, laptop still open in one hand, spinny wheel still spinning. I see the option to change something called “Authentication“ from a default setting to something called User ID. While I do so, a tiny ant crawls across my screen. I guess if it rains, people in Havana simply don’t go to Internet.

A pop-up informs me in Spanish that WHnacional could not be joined, and that I should try moving closer to the wireless router. I assume the router is in the metal shed, which is only ten feet away.

While the spinny wheel turns, I think about what I’d be doing at home right now, on a Saturday afternoon. Probably mindlessly scrolling through Pinterest, loading a never-ending stream of photos and more photos and more photos on my phone, while my TV streams a rerun of Girls over my Wi-Fi connection in the background.

This is going to be the time. I can feel it. I type in my 12-digit login and 12-digit password for what must be the 100th attempt. “Do you want Chrome to save the password for this site?” I THOUGHT YOU’D NEVER ASK.

How can Cuba’s limited, expensive Internet access somehow be worse than Gogo on a cross-country flight? If I were on a plane, I would have given up long ago. I type in my login again. “A154: no response from radius servers: check radius server configuration.” What?

I can see the ocean from here. It’s a block away. There’s a lovely walkway that follows the coastline to the historic part of town. Brightly colored ‘55 Chevys cruise by. “A160: invalid userid and/or password.” The girls next to me are somehow streaming a Destiny’s Child video.

This is where I want to give up. It’s glorious outside and I should be drinking rum at a sidewalk café encrusted in black exhaust. (The old Chevys aren’t exactly fuel-efficient and Havana’s streets reek of gasoline fumes.) Hemingway never wasted an hour wrestling with crappy Wi-Fi. I smash an ant crawling across my screen with my login paper.

I notice the girls next to me are getting error messages now, too. Aha! I get their attention and point to the sad little Wi-Fi symbol on my screen. It currently sports a “!”. One girl gives me an empathetic look and says “Se mal.” It’s bad.

I’d previously overlooked the other network my laptop found because its signal only had one bar and its name was a jibberish word. I decide I may as well try it, and it works the first time.

I feel a crush of deep, pathetic shame, but also, I’m online! Sweet, sweet Internet is mine and I’ve never been more grateful. The connection is actually quite fast.

As I scan hundreds of new emails, it dawns on me that I haven’t actually missed anything over the last 24 hours. No urgent messages are waiting in my inbox. No work crises are screaming at me from Slack. That nagging ”must get work done” feeling was totally self-imposed. I’m here to see Cuba and write about it. I close my laptop and walk toward the water.