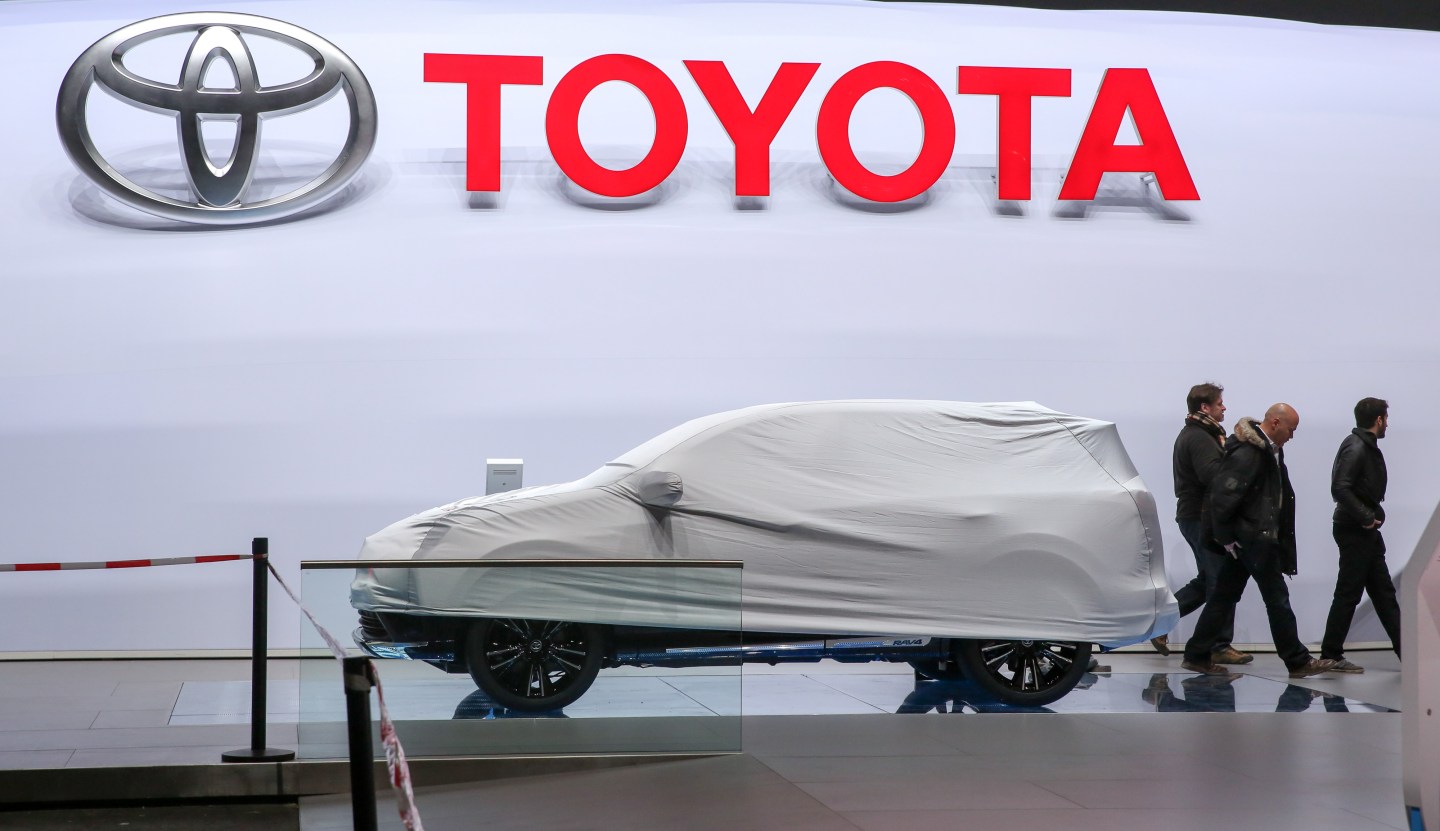 Attendees walk past a covered Toyota automobile, produced by Toyota Motor Corp., ahead of the 86th Geneva International Motor Show in Geneva, Switzerland, on Monday, Feb. 29, 2016. The show opens to the public on Mar. 3, and will showcase the latest models from the world's top automakers. Photographer: Chris Ratcliffe/Bloomberg via Getty Images
Chris Ratcliffe—Bloomberg via Getty Images

Toyota, the world’s biggest-selling automaker, said on Sunday it would suspend much of its production at plants across Japan this week after earthquakes in the country’s south led to a shortage of parts, while some other manufacturers extended stoppages due to damage to factories.

The earthquakes on Thursday and Saturday, which killed at least 41 people, reflected the vulnerability of Japanese companies to supply chain disruptions caused by natural disasters, and also highlighted the “just in time” philosophy pioneered by Toyota and followed by many others.

Companies had made efforts to address these problems after a 2011 earthquake and tsunami, which led to a nuclear disaster and nearly 20,000 deaths, badly dented output. The way that companies deal with the impact of the latest quakes will likely show how robust these changes have been.

Honda (HMC) said it would keep production suspended at its motorcycle plant near the quake-hit city of Kumamoto in southern Japan through Friday, though Nissan said it would resume operations at its plants north of the epicenter from Monday.

Electronics giant Sony (SNE) said production would remain halted at its image sensor plant in Kumamoto, as the electronics giant assessed structural and equipment damage. But the company said it had resumed full operations at its plants in nearby Nagasaki and Oita which also produce the sensors—used in smartphone cameras, including the Apple (APPL) iPhone.

Also on Sunday, semiconductor manufacturer Renesas Electronics confirmed it had sustained damage to some equipment at its plant in Kumamoto which produces microcontroller chips for automobiles. Having suspended operations following the first earthquake on Thursday, the chipmaker said it would assess damage at the entire facility before deciding when to resume production.

For more on Toyota, watch:

Toyota (TM) said it would suspend operations in stages at most of its vehicle assembly plants across Japan for roughly a week beginning Monday as it was unable to source parts from some of its suppliers including affiliate Aisin Seiki.

Earlier this year, Toyota offered limited details about what changes it made to its production system after the 2011 quake exposed the vulnerability of the “just in time” system, which allows companies to operate without big and costly inventories and instead receive small quantities of parts from suppliers only when needed.

Japanese supply analysts have said that other domestic suppliers have stuck to the core ideas of “lean” production, although they have made moves to make it more resilient to natural disasters.

Toyota and Nissan Are Teaming Up on Intelligent Maps

Since 2011, Toyota, which spent weeks at the time identifying how its suppliers had been affected by the quake, and Nissan have both developed supply chain databases which offer a detailed view of their supplier base to identify how their supply chain may be disrupted during emergencies.

Aisin Seiki, whose plants in Kumamoto sustained damage from the quake, said it would make the parts produced in the quake-hit city in other facilities at home and abroad. The parts include sun roofs, door handles, semiconductors, and other products.

“If there’s a part we make in Kumamoto which is identical to a part we make at the Aisin headquarters in Aichi (in central Japan) we’ll shift production there,” an Aisin spokesman said.

Aisin stressed that it had kept to the “just in time” system, and hadn’t built up big inventories, but instead did have robust plans for shifting production elsewhere.

“As a Toyota-affiliated company, we don’t hold significant inventory,” the spokesman said. “So as a rule we wouldn’t have been holding inventories to last, say, one week or a month.”

The latest stoppage is Toyota’s second in Japan this year, after production came to a halt for a week in February when a fire at an affiliate’s steel plant resulted in a gap in supplies and drove the car company’s global production down around 4& on an annualized basis in the first two months of 2016.

So far this year, domestic production has accounted for roughly 40% of Toyota’s global output, with nearly half of all its vehicles produced in Japan exported overseas.

Renesas, which suffered significant damage at its semiconductor plants in northeastern Japan following the 2011 quake, leading to months of delays to the global supply chain for automakers, previously said it had not been stocking extra inventory for risk management purposes since that disaster.

However, it has begun to standardize more parts across various models to enable in house production at alternative plants during emergencies.