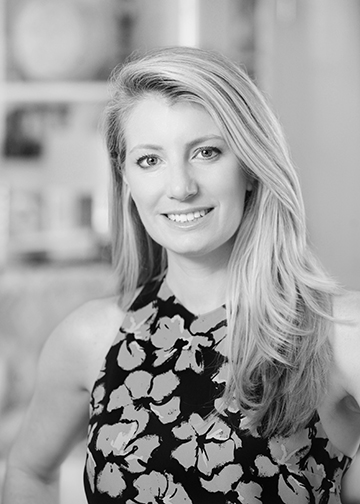 Former Gilt Groupe CEO Alexis Maybank is becoming as familiar a name to the fashion world as Gucci or Prada.

On Thursday, Maybank, along with co-founders Leah Park and Dustin Whitney, is launching Project September, a new mobile app with the goal of “making the visual world shoppable.” What this means, in practice, is an app with an almost entirely wordless interface that allows users to both share and shop from their smartphones.

The app has three basic functions:

1. Shopping: Project September lets users scroll from image to image as they would flip through a magazine—and fashion rags are an obvious influence on both the apps’ interface and its functionality. Shoppers can follow designers, models, and style icons and purchase clothing directly from their Instagram-like feeds. Maybank chose to focus on visuals because of the years she spent at Gilt, learning how people make purchase decisions. “The eye just bounces from photo to photo to photo,” she says. Notable influencers currently on the platform include Christy Turlington Burns and hair stylist Frederic Fekkai.

2. Sharing: Users can create their own “spreads” of their favorite clothing items around a theme or season, add text, and edit images all on the app. “They can create beautiful spreads without having any photoshop experience,” says Maybank. And the available visual formats are a “nod to best practices” in the magazine world.

3. Selling: The images created by users can be monetized by tagging a retailer. When a user tags an article of clothing, he or she creates a link that will take shoppers directly to the retailer’s site to purchase that item. In return, the retailer pays a commission. Those payouts typically ranges from 8% to 15% of the sale price, which is divided by between the user who created the spread and Project September, says Maybank. The app currently has partnerships with about 2,000 retailers, including major department stores like Bloomingdale’s and Lord & Taylor, as well as designers like Coach, Lacoste, and Fendi.

So far, the project has raised seed funding from VC firms WME Ventures, Venrock, Greylock Partners, First Round Capital, Montage Ventures, among others. “[Project September] takes advantage of the rapidly growing wave of user-generated fashion content to create a beautifully immersive experience that users don’t want to end,” said Venrock Partner Nick Beim in a statement. The company declined to disclose the amount of funding raised.

Park, who previously worked with Maybank as the SVP of creative at Gilt, is the company’s chief design officer, while Whitney will act as its chief technology officer. Park and Maybank first came up with the idea for Project September at Gilt, where they noticed a shift in the way fashion was being consumed. “We could see huge surges of shoppers coming from social media to Gilt from Instagram and Pinterest,” recalls Maybank. However, there was no way for shoppers to make purchases directly from the sites—a “blank space” that the founders felt needed to be filled.

With Project September, Maybank aims to fill that space, and, while she’s at it, to “capture the imaginations of fashion-lovers.”