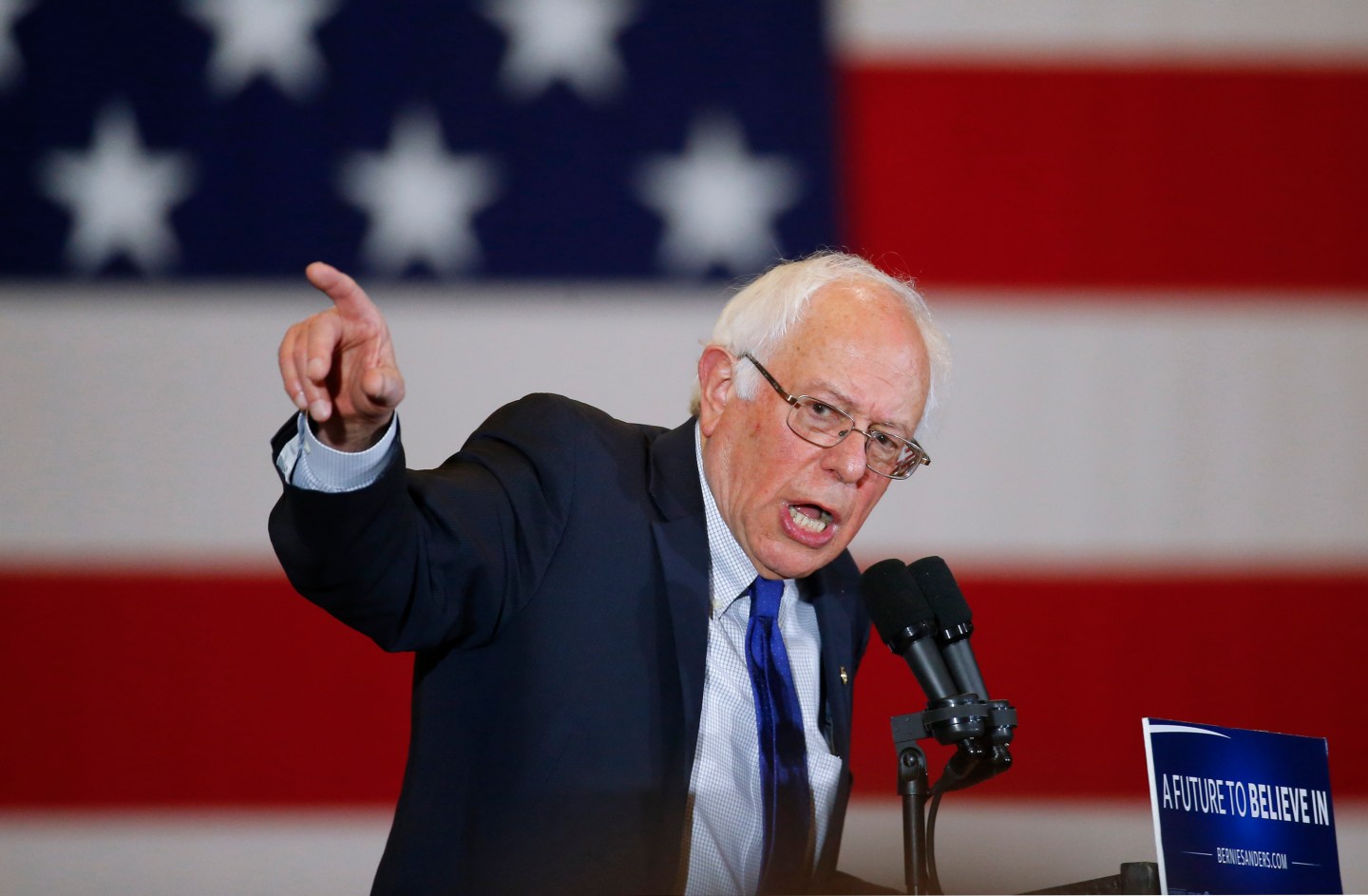 I read with interest Jeff Immelt’s spirited response to Sen. Bernie Sanders putting GE (GE) on his hit-list of big corporations that are “destroying the moral fabric” of America.

In fact, I share his frustration. Verizon is in Sanders’s bull’s-eye, as well. The senator’s uninformed views are, in a word, contemptible. Here’s why.

His first accusation – that Verizon doesn’t pay its fair share of taxes – is just plain wrong. As our financial statements clearly show, we’ve paid more than $15.6 billion in taxes over the last two years – that’s a 35% tax rate in 2015, for anyone who’s counting. We’ve laid out the facts repeatedly and did so again yesterday (see “Sen. Sanders needs to get his facts straight” at Verizon.com/about/news). The senator has started to fudge his language – talking of taxes not paid in some unspecified “given year” – but that doesn’t make his contention any less false.

Sen. Sanders also claims that Verizon (VZ) doesn’t use its profits to benefit America. Again, a look at the facts says otherwise. In the last two years, Verizon has invested some $35 billion in infrastructure — virtually all of it in the U.S. — and paid out more than $16 billion in dividends to the millions of average Americans who invest in our stock. In Sanders’s home state of Vermont alone, Verizon has invested more than $16 million in plant and equipment and pays close to $42 million a year to vendors and suppliers, many of them small and medium-sized businesses. Just yesterday, we announced a $300 million investment to bring fiber to the city of Boston, which will make it one of the most technologically advanced cities in the nation and expand broadband access for its residents. Boston’s Mayor Walsh is partnering with us on this initiative, calling it crucial for providing the foundation for future technology growth. We’re making significant investments in New York City, Philadelphia and other metro areas throughout our wireline footprint.

Verizon is one of the top 3 capital investors in all corporate America. Our investment has built wireless and fiber networks that deliver high-quality services, create high-tech jobs and form the infrastructure for the innovation economy of the 21st century.

I challenge Sen. Sanders to show me a company that’s done more to invest in America than Verizon.

Sen. Sanders has also involved himself in our on-going negotiations with the labor unions representing some 36,000 communications workers in our wireline business, a bargaining process that has been going on since last June. At a labor convention in Philadelphia last week, Sanders claimed that Verizon is demanding that workers take pay cuts and reduce health benefits or see their jobs shipped overseas.

Again, Sen. Sanders is wrong on the facts. More egregiously, he oversimplifies the complex forces operating in today’s technologically advanced and hyper-competitive economy.

Our objective in these negotiations is to preserve good jobs with competitive wages and excellent benefits while addressing the needs of our ever-changing business. All of our contract proposals currently on the table include wage increases, generous 401(k) matches and continued pension benefits. Contrary to Sen. Sanders’s contention, our proposals do not call for mass layoffs or shipping jobs overseas. Rather, we’ve asked for more flexibility in routing calls and consolidating some of our call centers, some of which employ a handful of people. We would continue to provide health insurance for active and retired associates and their dependents, but we have proposed some common-sense reforms to rein in the cost of these plans, which in 2015 ran to $1.4 billion a year for these represented employees, retirees and dependents. In fact, our healthcare plans – which provide access to medical, prescription drug, dental and vision coverage – are robust enough to make us subject to the “Cadillac tax” on excessive plans as defined in the Affordable Healthcare Act … the very law Sen. Sanders supported and voted for.

(If you want to read more details about our comprehensive proposal, go to Verizon.com/laborfacts.)

“Feeling the Bern” of reality yet, Bernie?

Have the facts of life changed for Verizon’s unionized employees over the last 15 years? Of course. The wireline business in which these employees work is not the telephone company of old. Competition and technology change have eaten into our traditional phone business, with more and more Americans giving up their landline phones altogether. As a result, wireline now accounts for less than 30 percent of Verizon’s total operating revenues, down from 60 percent in 2000, and less than 7 percent of our operating income. To remain competitive, we’ve transformed our wireline operations into a broadband company by building fiber-optic networks, offering Internet and video services, and investing in employees’ skills and work tools to help them make the turn to a 21st-century digital economy. And while the wireline labor force has gotten smaller as the business has shrunk, we’ve continued to provide good jobs, good wages and great benefits for thousands of workers.

It’s those workers whose future we seek to safeguard through these negotiations.

Sen. Sanders speaks of a “moral economy” for America – one that respects and maintains the dignity inherent in good, middle-class jobs. He seems to think that can only happen by ignoring the transformational forces reshaping the communications industry. But nostalgia for the rotary phone era won’t save American jobs, any more than ignoring the global forces reshaping the auto industry saved the Detroit auto makers.

We’re determined not to find ourselves in that same boat.

Today – as we have over our long history – Verizon provides good jobs for tens of thousands of Americans. We’re generating the profitable growth that allows us to invest in America and innovate for the future. More than that, we offer our employees the chance to contribute something vitally important to customers, businesses and the society as a whole by building the country’s best networks and delivering great communications services.

But in return, we’re asking our represented employees to look at the facts and engage in an honest conversation about what needs to be done to ensure these opportunities will be around for future generations. We need our employees to partner with us in creating a sustainable, competitive and, yes, profitable company.

To me, that’s just the moral thing to do.

I understand that rhetoric gets heated in a Presidential campaign. I also get that big companies are an easy target for candidates looking for convenient villains for the economic distress felt by many of our citizens. But when rhetoric becomes disconnected from reality, we’ve crossed a dangerous line. We deserve better from people aspiring to be President. At the very least, we should demand that candidates base their arguments on the facts … even when they don’t fit their campaign narratives.

Lowell McAdam is Chairman and CEO of Verizon. This post originally appeared on LinkedIn.