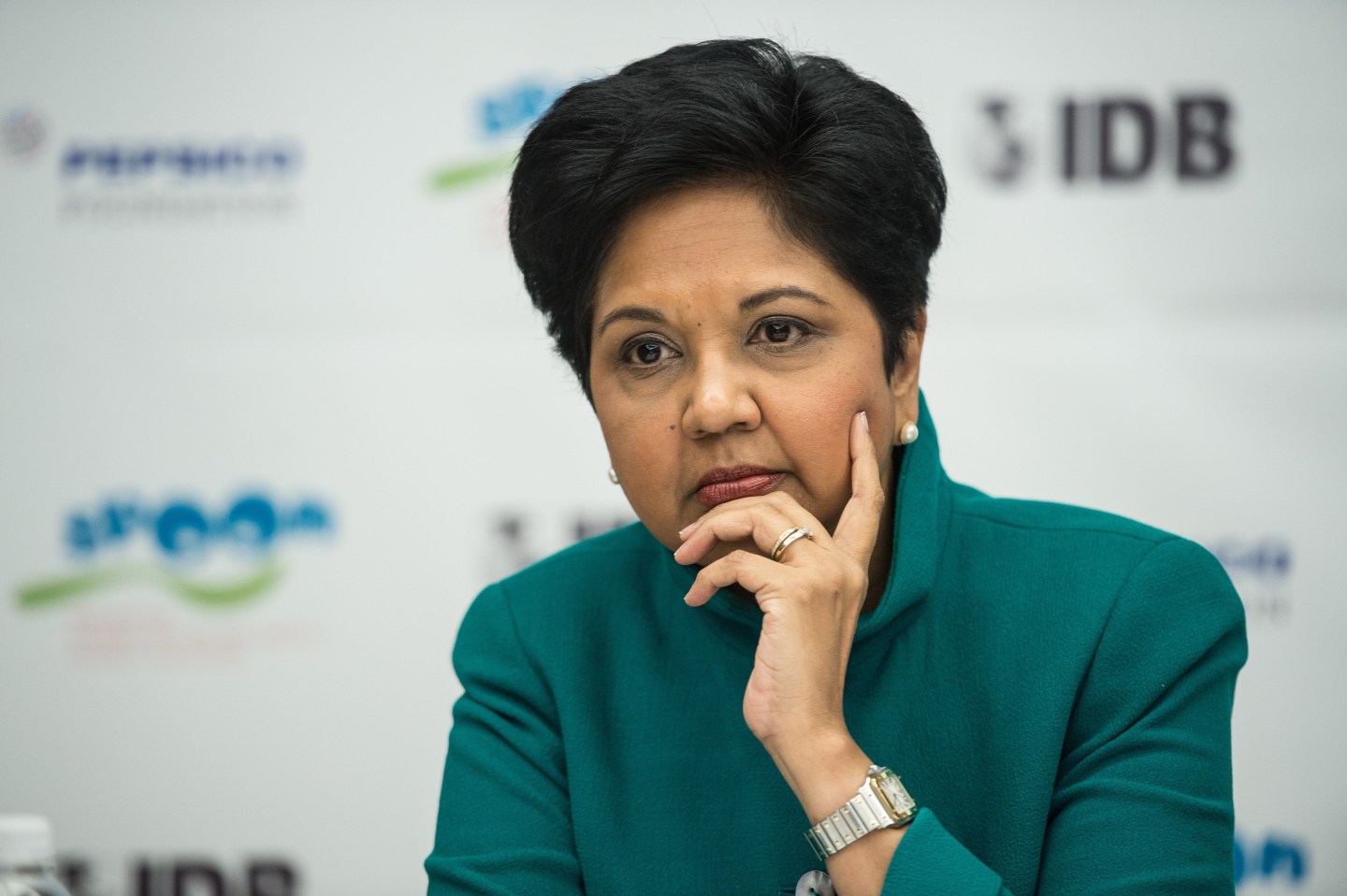 Pepsico CEO Indra Nooyi takes a question during the announcement of a partnership with the Inter-American Development Bank (IDB) on a nutrition project in four countries, Colombia, Guatemala, Mexico and Peru in Washington on October 15, 2014. The announcement comes on the eve of World Food Day, an annual platform for people across the globe to reinforce their commitment to ending hunger and malnutrition. The IDB and PepsiCo first partnered in 2008 to make global gains in water and sanitation; sustainable agriculture, nutrition and food security, recycling; youth development; and disaster relief. Partnership projects have benefited communities in Argentina, Bolivia, Brazil, Colombia, Dominican Republic, Guatemala, Mexico, Paraguay and Peru. In total, PepsiCo as contributed nearly $15 million to the IDB to date. AFP PHOTO/Nicholas KAMM (Photo credit should read NICHOLAS KAMM/AFP/Getty Images)
Photograph by Nicholas Kamm — AFP/Getty Images

Indra Nooyi, CEO of PepsiCo, recently ran into some bittersweet memories while having her office renovated.

Speaking on a panel at the 2016 Women in the World Summit in Manhattan, Nooyi said that she came across an old note that was written by her elder daughter when she was four or five years old. “It read, ‘Dear mom, I love you. Please come home,'” says Nooyi. Her daughter, now an adult, also objected to Nooyi’s plan to replace her desk, which she slept under as infant in the early days of Nooyi’s tenure at the company.

“I have to remind myself of what I lost,” says Nooyi, referring to difficulties of running a Fortune 500 companies while parenting two children. While she says she does not regret her decisions, that doesn’t mean she hasn’t suffered “heartaches” and would counsel her younger self to be “careful of your choices.”

“You will look back and it will hurt like hell,” says Nooyi. “And it does.”

Fellow panelist Anne-Marie Slaughter, president and CEO of New America and author of Unfinished Business: Women Men Work Family, shared a poignant memory of her own, recalling a time when her young son drew a family portrait—in which Slaughter was portrayed as a laptop.

“At that moment I thought, okay, time to make a little adjustment,” say Slaughter.

The pair offered no magic bullet for saving other parents from such moments, but they did have a number of concrete suggestions for how to lessen the friction between work and motherhood.

Focusing on the importance of childcare, Nooyi says that PepsiCo is “looking at” building a daycare center on its campus. She says any such center would prioritize hiring qualified care professionals and offer care for sick children.

Stressing the importance of involving grandparents and other family members in childcare, says she’s interested in getting even more involved, possibly by creating “prototype communities” that would provide housing for young parents and their extended families, combined with on-site childcare. “PepsiCo could build the daycare,” she says. “We’d love to have one progressive developer join up with us.”

Slaughter agreed that childcare is a vital piece of the puzzle, noting that care workers need better training and better pay. The people who watch our children makes the same amount that “we pay people to mix our drinks, or park our car, or walk our dogs,” says Slaughter. “That’s crazy.”