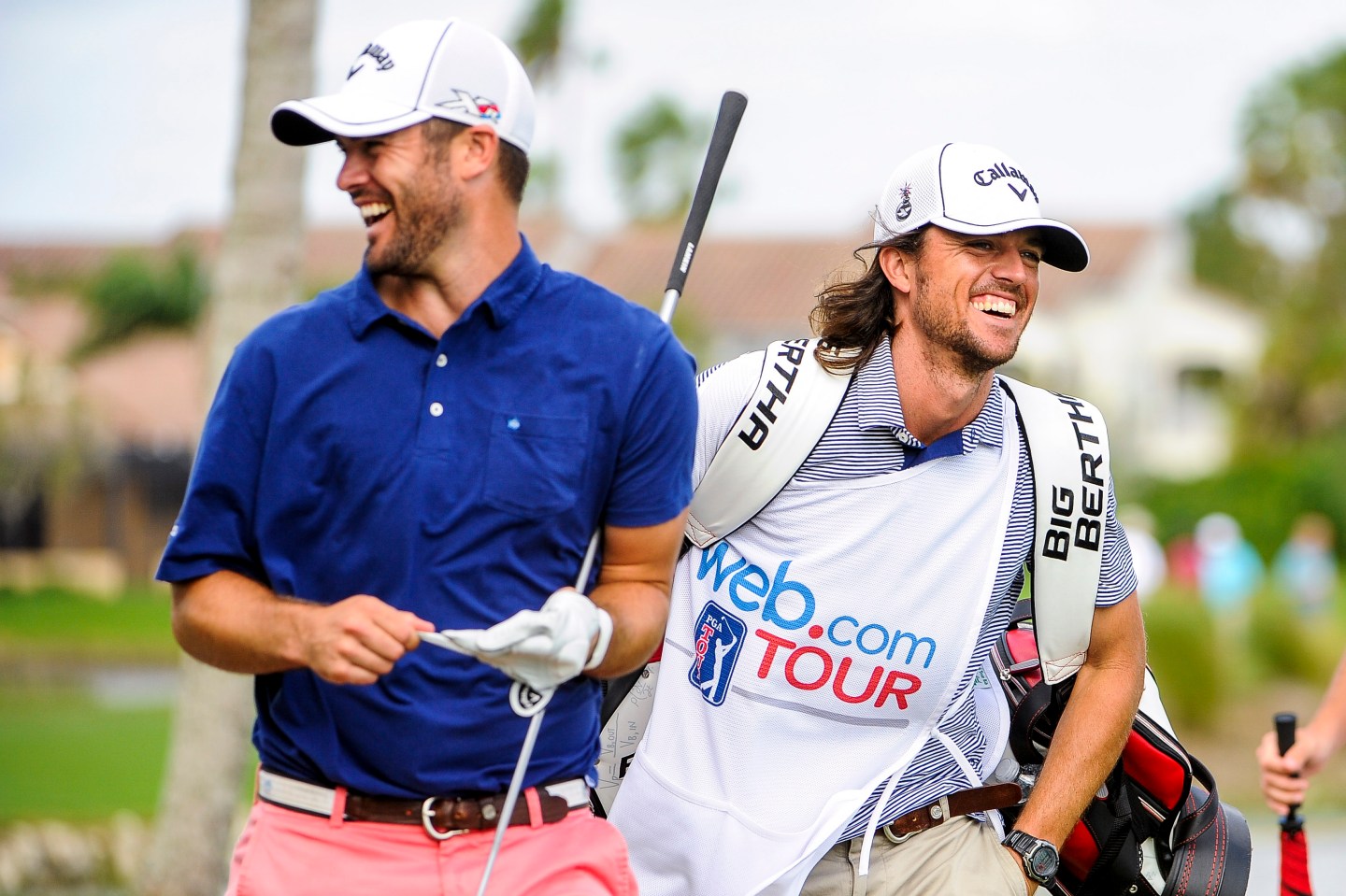 PALM BEACH GARDENS, FL - DECEMBER 13: Wesley Bryan, left, shares a laugh with his caddie and brother George Austin Cook after teeing off on the 12th hole of the Champion Course during the final round of Web.com Tour Q-School at PGA National Resort & Spa on December 13, 2015 in Palm Beach Gardens, Florida. (Photo by Keyur Khamar/PGA TOUR)
Keyur Khamar US PGA TOUR

When you hear “the Bryan Brothers,” you probably think of Bob and Mike, the Olympic medal-winning tennis twins. But there’s another sibling sports duo competing with them for Internet popularity: Wesley and George, the Bryan Bros of the golf world.

Wesley, 26, and George, 28, have gained a loyal social media following by posting YouTube videos of their trick shots, seemingly impossible golf plays that require a ton of coordination and often a bit of luck. With names like “The Brick Wall Banker” and “The Phil Mickelson Backwards Flop Shot,” it’s easy to find yourself watching dozens of these short clips even if you have limited golf knowledge (or accidentally ended up on their page while searching for the tennis Bryans).

After they started posting the videos in 2014, the South Carolina brothers quickly realized they could monetize their side hustle to fund their professional golf careers. With endorsement deals with companies like Lexus, GoPro, Callaway and Southern Tide, they continue to grow the Bryan Bros brand. They now count more than 118,000 followers on Instagram alone.

Both Wesley and George played collegiate golf at the University of South Carolina and competed on the E-Golf and Web.com Tours. Wesley recently won the Chitimacha Louisiana Open, and he’s aiming to make it to the PGA Tour one day. Regardless of what happens on the golf course, the duo wants to turn their brand into a full-fledged business. “We want to show people that we can actually play this game and not just hit golf balls in the air,” George says.

With hundreds of thousands of followers on social media, the Bryan brothers shared some tips any entrepreneur can use to grow a brand.

1. Find out what the market players are doing – and then do it better

How can an entrepreneur carve out a space in a saturated market? You need to find out who’s already playing the game and decide if you can play it better, George says. That’s actually how the Bryan Bros brand was born. The golf duo saw a viral trick-shot video on YouTube, and decided to replicate the shot themselves. Wesley says: “We were pretty good at it, so we thought, if these kids could get a million hits on YouTube, why couldn’t we?”

The Bryan brothers attribute a big part of their success to their work ethic. They post videos almost daily – sometimes several in the span of a few hours – on their various social media channels. And that’s a lot when you consider they have a presence on Instagram, Snapchat, Vine, Facebook, Twitter, and YouTube. In their book, the key to building a cult-like following is consistency. “The trick is that when we film this stuff, we film a lot in one or two days,” Wesley says. “We’re not filming every single day. We just film a lot of content and plan when to release it out.”

Golf is not a game that’s typically popular with teens, but the Bryan brothers know how to engage an audience really well. Most of their followers are actually young – the majority being 10 to 20 years old – so they put a lot of effort in reaching that demographic. It makes sense that their most popular social media platforms are Snapchat, Vine and Instagram. Wesley says every entrepreneur needs a social media presence to reach millennials and even Gen Z. “We want to get the younger generation interested in a game that they wouldn’t have normally wanted to play,” he says.

4. Interact with your followers (yes, even the haters)

Building a loyal follower base isn’t easy, but the Bryan brothers have seen the power of humanizing a brand. They respond to most of the comments they receive on social media – good or bad – because they say it makes fans more invested in the real people behind the business. Their tip on how to handle the nasty comments? “When someone says something negative, just hit them with a bunch of emojis,” George says. “They always respond with, ‘Oh I’m totally kidding. I actually love you guys.’ Invest a little time in the people who take the time to follow you.”

5. And if all else fails, just wear crazy socks.