Greg Louganis Is On a Wheaties Box After Thousands of Petitions 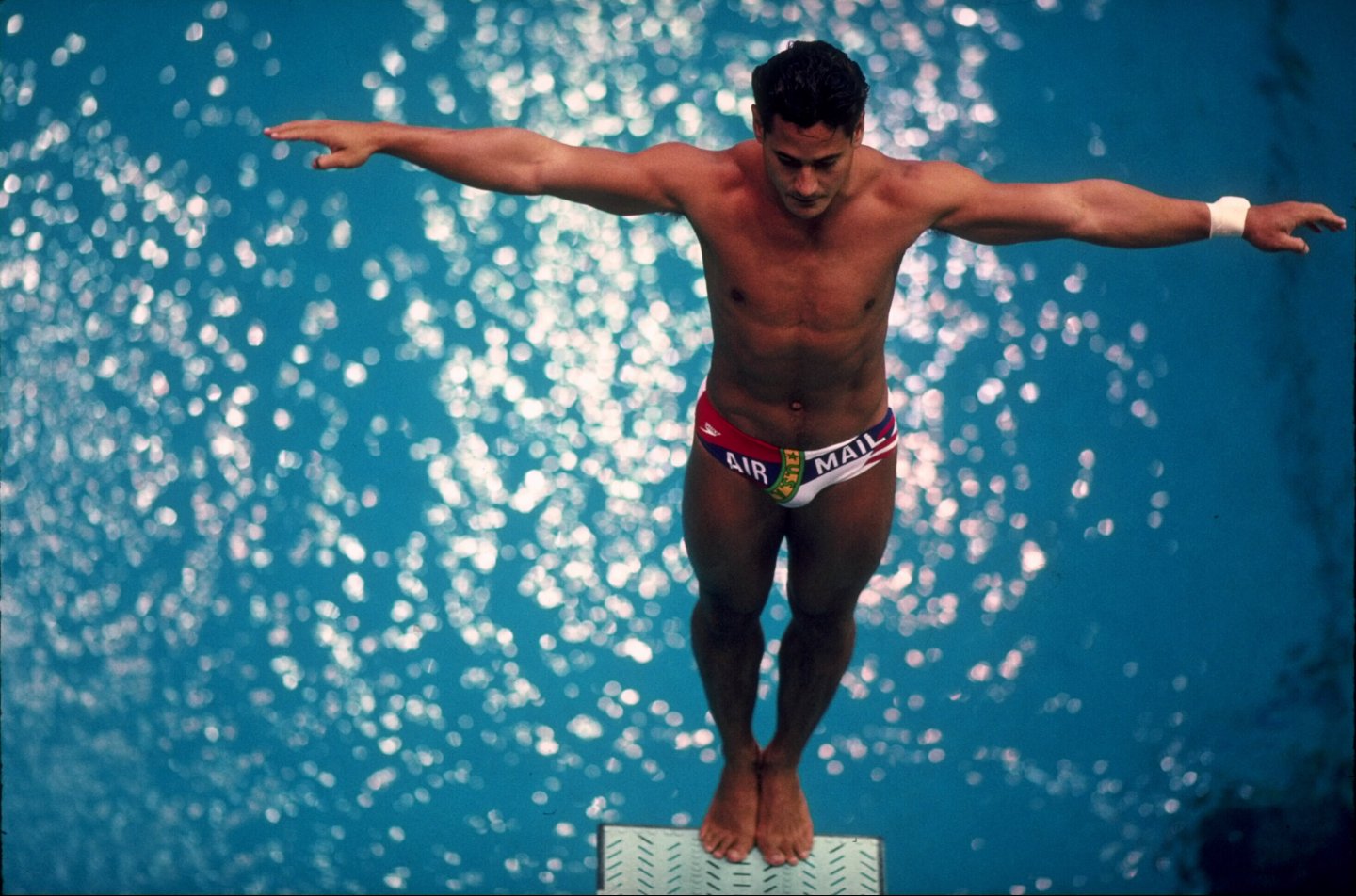 1988: Greg Louganis of the USA sets his feet on the edge of the diving board before attempting a dive in the men's spring board competition during the 1988 Summer Olympic Games held in Seoul, South Korea. Louganis repeated his 1984 Olympic performanceby winning the spring board event and capturing his second gold medal. Greg Louganis came from an unhappy childhood and alcohol abuse as a thirteen year old to find composure and confidence through diving. He became the greatest exponent of the sport,winning the Olympic springboard and platform diving titles in both 1984 and 1988 and doubtless would have added to that collection but for the boycott of 1980, having won a silver medal in 1976. Louganis, a bold spirit, suffered injuries in some of hisdives, the most famous at the Games of Seoul in the springboard competition. In the preliminary section he failed in his leap to get away from the board in his somersault and struck his head on it. Temporary sutures were applied and just over half an hour later he attempted the dame dive, a reverse somersault, and achieved the highest score in the preliminary round. Mandatory Credit: Pascal Rondeau/Allsport
Photograph by Pascal Rondeau—Getty Images

General Mills, the giant food company behind Wheaties, has put three Olympic champions on the front of its cereal boxes.

Seeing your image on a Wheaties box is an age-old honor for athletes, and a tradition for Wheaties dating back to 1934, when it put baseball great Lou Gehrig on the back of its boxes to celebrate its still-used tagline “The Breakfast of Champions.” Since then, the brand has particularly highlighted Olympic champions such as gymnast Mary Lou Retton, sprinter Jesse Owens and decathlete Bruce Jenner.

Wheaties has announced the newest champions to be honored in the @Wheaties Legends series https://t.co/61Mu1coDJh pic.twitter.com/ywIAvr18G0

It is the inclusion of Louganis this round that is particularly noteworthy. Louganis, who many consider as the greatest diver in the sport’s history, was the subject of a Change.org petition last year calling for his own dedicated Wheaties box.

Aside from his Olympic credentials, Louganis is also known for publicly declaring in a 1995 interview with Oprah Winfrey that he was gay and HIV-positive. During the 1988 Olympics in Seoul, Louganis hit his head on a springboard during a dive, and at the time, was secretly HIV-positive.

These details were featured in a recent HBO documentary called Back on Board: Greg Louganis, where the diver mentioned in the film that he had never been featured on a Wheaties box for one particular reason. “Their [Wheaties] response was that I didn’t fit their wholesome demographics or whatever. Basically, being gay, or being rumored that I was gay,” he said in the film, as reported by NBC.

The subsequent petition arising from this revelation garnered around 41,000 signatures, and was presented to General Mills officials in Minneapolis, the Times reported. Marketing executives at the company, however, downplayed the petitions’ influence, with Mike Siemienas, manager of brand media relations at General Mills (GIS), saying the choices were “not about who gets the most votes or who gets petitions.”

Louganis doesn’t seem to be holding any ill will to the brand, and celebrated the news on Twitter.