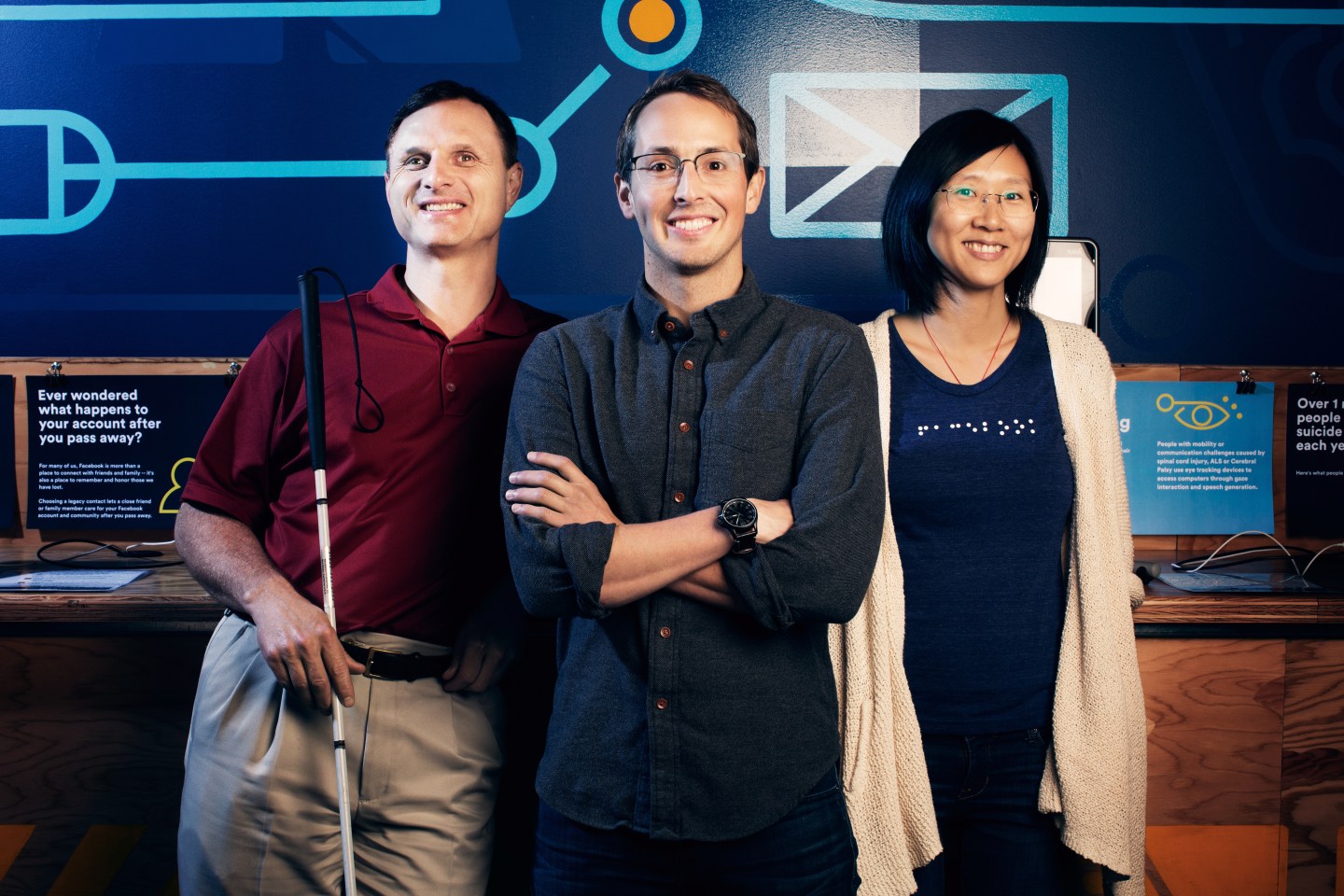 In its relatively short life, Facebook has grown more and more visual; its users upload and share some 350 million photos every day. The social network says that evolution has made its platform a more “fun and expressive way” to communicate, but it has also marginalized a subset of its users: the blind.

On Tuesday, Facebook (FB) is introducing new technology to help bring that group back into its fold.

Facebook’s new automatic alternative text, or automatic alt text, feature will generate photo descriptions for users relying on a screen reader—a tool for the visually impaired that reads the web pages aloud. Before Tuesday, users of screen readers would hear the name of the person who shared the photo, followed by the term “photo” when they’d scroll past an image in their Facebook news feed. Now, those same users will hear a basic description of the photo such as, “image may contain three people, smiling, outdoors.”

The new feature relies on Facebook’s visual recognition engine, an artificial intelligence-powered technology that processes every single photo and video uploaded to the social network. So far, Facebook has trained the engine to recognize dozens of items—car, mountain, tree, sunset, basketball court, ice cream, pizza. Automatic alt text then mentions those objects in the special captions it generates for the blind.

Facebook users are, of course, able to post text along with their photos, but they often don’t describe what’s actually in a given picture. Someone may write “Sunday night splurge!” on a photo of a pizza. Facebook’s new tool will provide blind users with vital information—”image may contain: pizza, food”—that puts a vague description in better context.

Such descriptions will allow blind users to join conversations they were previously left out of, says Matt King, an accessibility specialist in user interface engineering and a member of Facebook’s accessibility team. The new tool promotes “equal access to information for people who are blind,” he says, which is especially important to young blind users whose peers live on social media.

At launch, the automatic alt text tool will feature about 100 concepts, which can be identified with accuracy of between 80% and 90%. Facebook is taking a conservative approach to adding more items, favoring precision over quantity for fear of misleading visually impaired users. The feature was introduced as a prototype in November, and on Tuesday it will be available to iOS users. The company plans to expand it to Android devices and desktop users in the future. The initial version of the technology will be in English; other languages will be added later on.

Automatic alt text is the latest tool introduced by Facebook’s accessibility team, a division of the company created five years ago to help the social network develop products for disabled users. The team was the driving force behind technology that added closed captioning to videos for deaf users and it made Facebook compatible with eye-tracking devices.

Anil Lewis, who is the executive director of the National Federation of the Blind’s Jernigan Institute, says Facebook’s innovation is commendable, but his organization is focused on a more basic goal: “fundamental access” to online content for blind people.

Screen reader software is available on many operating systems, but its effectiveness depends on how a website’s code is written. Federal agencies are required to make their electronic and information technology accessible to people with disabilities under a 1998 amendment to the Rehabilitation Act of 1973. And many private companies have adopted the Web Content Accessibility Guidelines 2.0 written by the World Wide Web Consortium. But when it comes to private industry’s legal obligations to host websites compatible with screen readers, the law is murky, says Clara Van Gerven, accessibility programs manager at the National Federation of the Blind. The organization has tried to use the Americans With Disabilities Act to compel corporations to create accessible websites even though the legislation originally pertained to the accessibility of the physical locations of businesses.

Recently, the NFB brought a case against Target, whose website lacked so-called alt tags that made it inaccessible to the blind. Target claimed that the ADA only covered its physical stores—not its website—but a judge ruled the lawsuit could go forward. The parties eventually settled, and Lewis told Fortune that he now considers the retail giant one of his organization’s “true partners.” Nevertheless, case law on whether the ADA applies to websites “hasn’t been settled,” Lewis says.

“Accessible coding is often the same as good coding; you end up with a code base that’s easier to maintain.” she says.