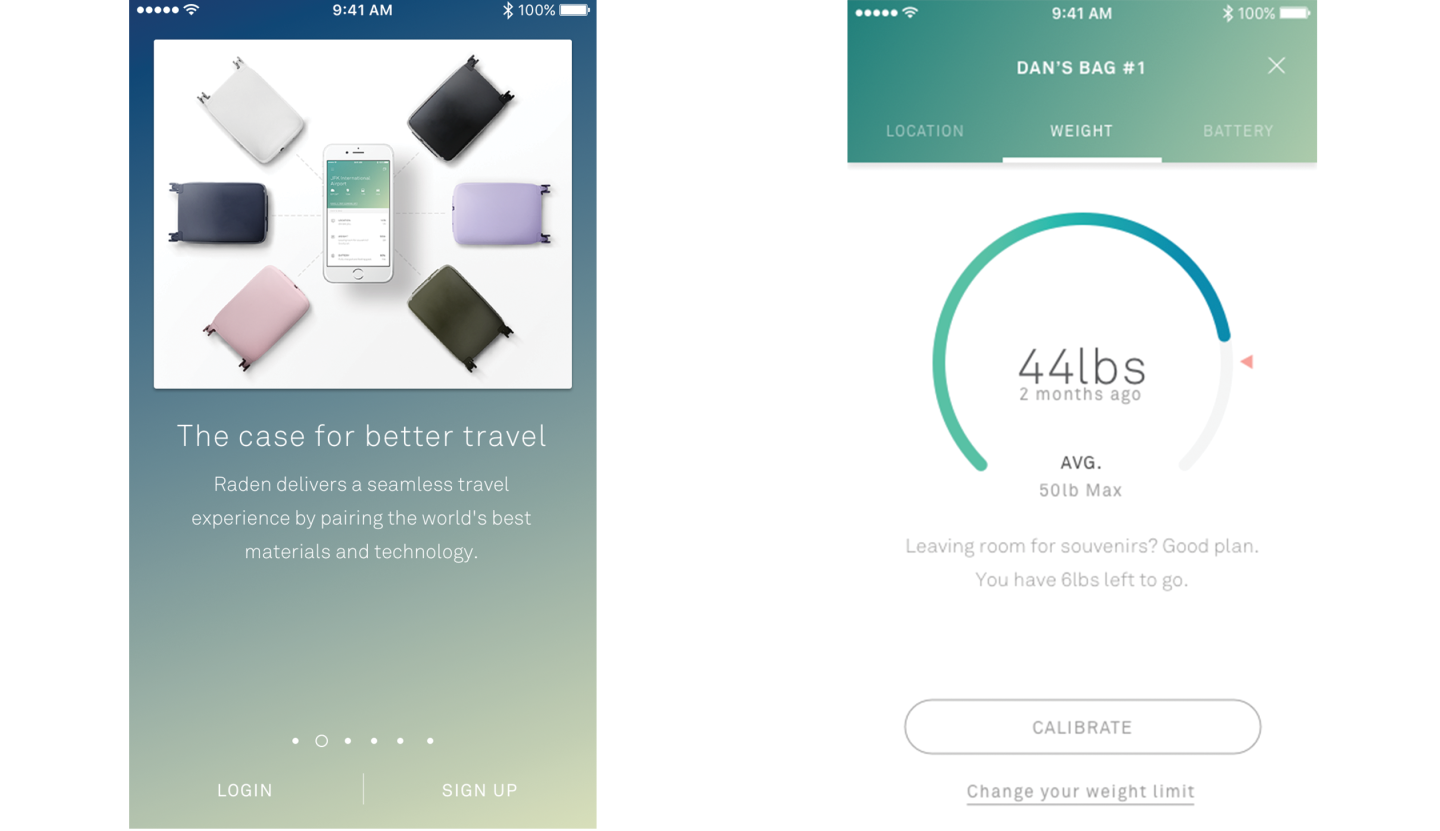 The Internet of Things has put a “smart” spin on everyday devices — among them, luggages. Bags with built-in weight scales, batteries to charge your iPhone and GPS trackers have started to fill the marketplace — even Samsung and Samsonite have one in the works. And now there’s one more: Raden.

The idea came to founder and CEO Josh Udashkin while he was working as the director of international development for the shoe company Aldo. His job involved traveling to new locations as they opened, which meant he spent a good deal of time living out of a bag. When looking at his options, he found there was a lack of fresh, beautifully designed luggage that was also affordable.

Two years in the making, the Raden smart suitcase comes in two sizes: one that’s small enough to be a carry-on and one that must be checked. Like its competitors, it houses a bevy of electronic features designed to make traveling easier, including a sensor that can tell you how much your bag weighs so you can avoid paying overage fees. An accompanying app works as a travel companion of sorts, providing information such as the shortest route to the airport, how long you’ll wait at security and whether or not your flight is affected by a weather delay. When you travel you can also collect virtual points within the app that can be redeemed for physical badges. The badges can be used to decorate the case (think of them as creating a sort of an external version of your passport).

Udashkin isn’t concerned about his competitors; he’s just glad they exist. Because the smart luggage space is still so new, all of the makers in it are serving to legitimize the concept and create a market for it, he says.

That clunkiness even made headlines a few months ago when a reporter who was test-driving one of the bags was flagged by the Transportation Security Administration because the bag’s wiring looked suspicious. All of the electronics in Raden are removable, in case there are any security snafus or you just want to do something like use the bag’s built-in battery while you’re wandering around town.

Raden took two years to make in part because Udashkin wanted to make sure he got everything right. That meant traveling around the world to find the right factory and the right advisors.The bag was designed by Kenneth Sweets, the principal designer behind Beats headphones.

Udashkin used his own capital for the first eight months of the business before he started to bring in outside investment. Unlike many of his competitors, he chose to go the venture capital route instead of crowdfunding. It’s an odd choice upon first glance considering the success that previous smart luggages have found in crowdfunding. Bluesmart, arguably the leader in the space, raised a whopping $2.2 million on Indiegogo in December 2014. A year later, Trunkster raised a total of $1.5 million for its suitcase on Indiegogo and Kickstarter. (Trunkster added even more to that investment in December 2015, when it managed to get a $1.4 million investment from Mark Cuban and Lori Greiner on Shark Tank.)

But crowdfunding hardware comes with one huge hitch that made Udashkin decide to choose a VC investment instead: You never really know when you start how long the production process is going to take.

“I can’t imagine borrowing money from people that I need to impress in order to undertake the R&D,” he says.

In its Kickstarter campaign, Trunkster promised backers it would be shipping its first units in August of last year. Now, seven months later, an update from the company indicates that it just finished the mass production of the first batch of Trunksters, with plans to ship them out soon — not exactly on schedule, and something that disappointed and angered buyers.

Raden’s decision to go the VC route afforded customers the feature of being able to buy it now. While the company is selling on its site, it also has a retail location in New York where potential buyers can take the bag for a spin before they buy. When they do buy, the bag is shipped to their doorstep. It’s a concept similar to that of buzzy mattress startup Casper.

Udashkin has raised two rounds of funding, one from his circle in NY (including the founding team of Casper), and then a seed round of $3.5 million from First Round Capital and others. He specifically asked the investors to refrain from announcing the investment or sharing pictures of the suitcase, allowing the bag to be built out of the public eye.

“For me, I’m most proud of the achievement on the tech angle side, the brand side, the team side, everything else — raising money is only a means of getting all that done, it’s not a thing to celebrate in and of itself,” he says. “I really wanted to delight customers, and I didn’t want to disappoint them.”