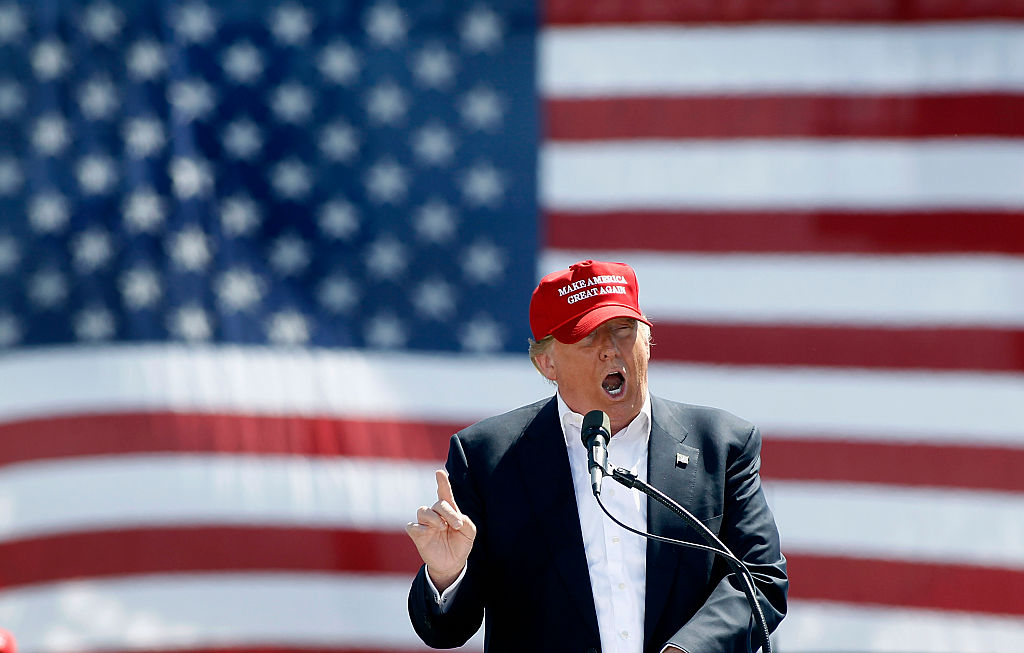 “You know what we sell to the Japanese? Practically nothing!”

It should come as no surprise that the propounder of that assertion was Donald Trump, during a rambling tirade after his Republican presidential primary victory in Florida and other states earlier this month. Perhaps Trump is aware of the fact that Boeing supplies the overwhelming majority of planes used by Japan Airlines and All Nippon Airways, or perhaps he isn’t; in any case, he was characteristically cavalier in his disregard for the truth.

A few seconds of Googling would have revealed that U.S. exports of goods and services to Japan exceeds $100 billion a year, with the top products including aircraft and spacecraft, medical and technical equipment, machinery, electronic equipment and pharmaceuticals. Trump was presumably referring to sales of U.S. cars in Japan, which are indeed minimal, but he did not bother to clarify the point. His “very good brain” functions better without the clutter of such fine distinctions.

This was just one example of the New York tycoon’s capacity for ignorance and outlandishness on economic issues. But amid the balderdash that he routinely spouts on the subject, Trump has put his finger on a couple of problems in the global economic system that merit broad public concern. The international community would be well-advised to address these issues before long; Trump’s bluster about them should serve as a warning that bad consequences may ensue otherwise.

One legitimate worry that Trump often cites is the competitive advantage that some countries get in world markets when the exchange rate of their currency falls against the U.S. dollar. China is the most glaring example of a nation whose exporters benefited in recent years from an artificially low exchange rate, and although the Chinese yuan is now appreciably higher than before, the danger remains of a “currency war” in which depreciation is widely used by countries as a strategy for aiding their domestic manufacturers.

Another justifiable focus of Trump’s rhetoric is how American companies get a raw deal thanks to China’s overall trade practices. Especially since President Xi Jinping took office in late 2012, Beijing has tilted the playing field in its domestic market against foreign firms aiming to sell products to Chinese customers. In a recent survey by the U.S.-China Business Council, which represents more than 200 American corporations doing business in China, 97% of the respondents said they “know or think” their state-owned Chinese competitors receive benefits they do not including “preferential financing, access to government contracts, and preferential licensing.” And nearly 80% said that even private Chinese firms get such benefits. “The clear message is that Chinese companies get preferential treatment over foreign competitors,” the group said.

As is his wont, Trump’s level of sophistication on these matters would rate about a D-minus in a freshman economics class. He likes to claim, for example, that the United States is “losing” several hundreds of billions of dollars a year to China, and somewhat smaller amounts to Japan and Mexico, based on the bilateral trade deficits America is running with those countries.

After all the ink that has been spilled in the trade debate in recent years, it should go without saying that the word “loss” is tortured verbiage for a situation in which imports exceed exports. But Trump, being obsessed with “winning,” evidently applies hand-size reasoning (i.e., the bigger the plus size, the better) to the trade balance, which is nothing more than the sum total of millions of mutually advantageous, consensual international transactions. He therefore pays no heed to the enormous economic benefits the United States reaps when its consumers and companies freely purchase foreign goods that are cheaper and/or better than the domestic alternatives. His political purposes, and his world view, lead him to dwell solely on the factory closings and job losses that are the inevitable result of competition with foreigners, even though countless economic analyses indicate that the upside (including jobs in export industries) outweighs the downside.

The candidate’s harping on bilateral U.S. trade deficits with individual countries, which he attributes to the relative cleverness of their trade negotiators, is particularly silly. Although a large overall trade deficit for a country may be a sign of weakness—it might indicate that the country is living beyond its means—the trade balance between two countries typically reflects such a wide array of factors as to render the figure economically meaningless. The U.S. ran large trade surpluses last year with Brazil, the United Kingdom and the Netherlands—so are their trade negotiators somehow dumber than everyone else’s?

Craziest and most disturbing of all are Trump’s claims that he can resolve America’s biggest trade headaches unilaterally, by imposing a 45% tariff on Chinese goods (or just threatening to do so in the expectation that this alone will force Beijing to offer major concessions). The day is long past when the United States could credibly brandish any such threat. Washington occasionally got away with it a couple of decades ago when China’s economy was a fraction of its present size, but China now accounts for a similarly large chunk of the global economy as the United States (about 16%, as measured by purchasing power parity). Slapping a massive tariff on all Chinese imports would be the economic equivalent of launching a nuclear attack—and at this point, China has the economic equivalent of nukes, too.

For the sake of argument, let’s ignore the fact that the unilateral imposition of trade sanctions in this manner would blatantly violate the rules of the World Trade Organization, which oblige member countries to maintain ceilings on tariffs and apply them in a non-discriminatory fashion. A President Trump would presumably be unafraid of China bringing a complaint to the WTO, because the global trade body’s tribunals move slowly. A year or two would probably pass before the WTO could rule that the U.S. actions were illegal, by which time significant damage would have been wreaked on the Chinese economy.

China would therefore dispense with WTO niceties too—and it would be perfectly justified in doing so in the event that Washington showed such flagrant contempt for international law. Without waiting for the trade body’s approval, Beijing would surely take punitive action of its own against U.S. goods, which would inflict severe damage on many leading American corporations. The prospect of full-blown trade war between the world’s two biggest economies would cause a collapse in financial markets that could make the Lehman Brothers shock of 2008 look like a mere “correction” by comparison. Both sides would suffer, but counting on China to back down would be foolish; no Chinese leader could survive in office after cravenly submitting to American bullying, after all.

An enlightened Trumpkin could respond to the above points as follows: OK, Wise Guy, what should we do about the problems of Chinese trade practices and the cheapening of currencies? Isn’t the basic perception of a fair global trading system at risk if one of the biggest players is violating the spirit of the rules, and if major central banks like Japan’s are taking actions that cause substantial depreciation of their currency’s exchange rate? Is the United States supposed to sit by and pretend that the free market is working just dandy, regardless of the effect on American companies and workers?

Fair questions—and the answer is that action is definitely desirable, provided it takes place at the multilateral level. This means exercising U.S. leadership in the WTO, the International Monetary Fund, and the Group of 20 major economies. Such an approach may be far less exciting than Trump-style unilateralism, but it holds far greater promise of delivering effective results.

The WTO in particular desperately needs revitalization if it is going to perform its role over the long term of keeping global trade relatively free and fair. Not since the Uruguay Round of trade negotiations was finalized in 1994 have international trade rules been overhauled. And although China underwent major market-opening reforms to gain WTO membership in 2001, deeper liberalization is clearly necessary to rid the Chinese economy of its most protectionist features.

For those reasons, the WTO ought to embark on a new round, aimed at addressing issues posed by China’s growing influence on the system. The very idea may evoke hoots of derision in some quarters—the last such effort at revamping WTO rules, known as the Doha Round, ground to a halt after years of talks, as I chronicled in a book, and it was all but officially pronounced dead in December. But a “Beijing Round” could provide the trade body with a newfound raison d’être. China would be pressed to ensure more transparency and fairness in its market; in exchange, Beijing’s trading partners would offer safeguards against measures that threaten Chinese economic security.

In a similar spirit, the IMF and G-20 (perhaps in conjunction with the WTO) should strive to devise a set of rules regarding currencies. No less an authority than Raghuram Rajan, the IMF’s former chief economist who currently heads India’s central bank, has recently argued for an international agreement to govern what the world’s major governments can and can’t do in the monetary arena. Rajan recognizes, of course, that central banks must retain the right to radically pump up their countries’ money supplies when their economies face deflationary threats, as the Bank of Japan, Federal Reserve Board and European Central Bank have all done. He also acknowledges that it is very difficult to distinguish between “good” policies aimed at stimulating domestic demand and “bad” policies that drive down exchange rates.

Here again, the last effort by the IMF at devising rules went awry, as I chronicled in another book. But just because a venture in international cooperation fails, that doesn’t necessarily mean that the countries involved are completely incapable of working together on the issue in question in a mutually beneficial way. It may mean that they need to try again, only harder.

Let’s hope they do. More vividly than ever, thanks to Trump, international economic policymakers can envision what sort of catastrophe may arise if they shrink from the task.

Paul Blustein, a journalist and author, is a senior fellow at the Centre for International Governance Innovation. He spent most of his career at the Wall Street Journal and Washington Post.