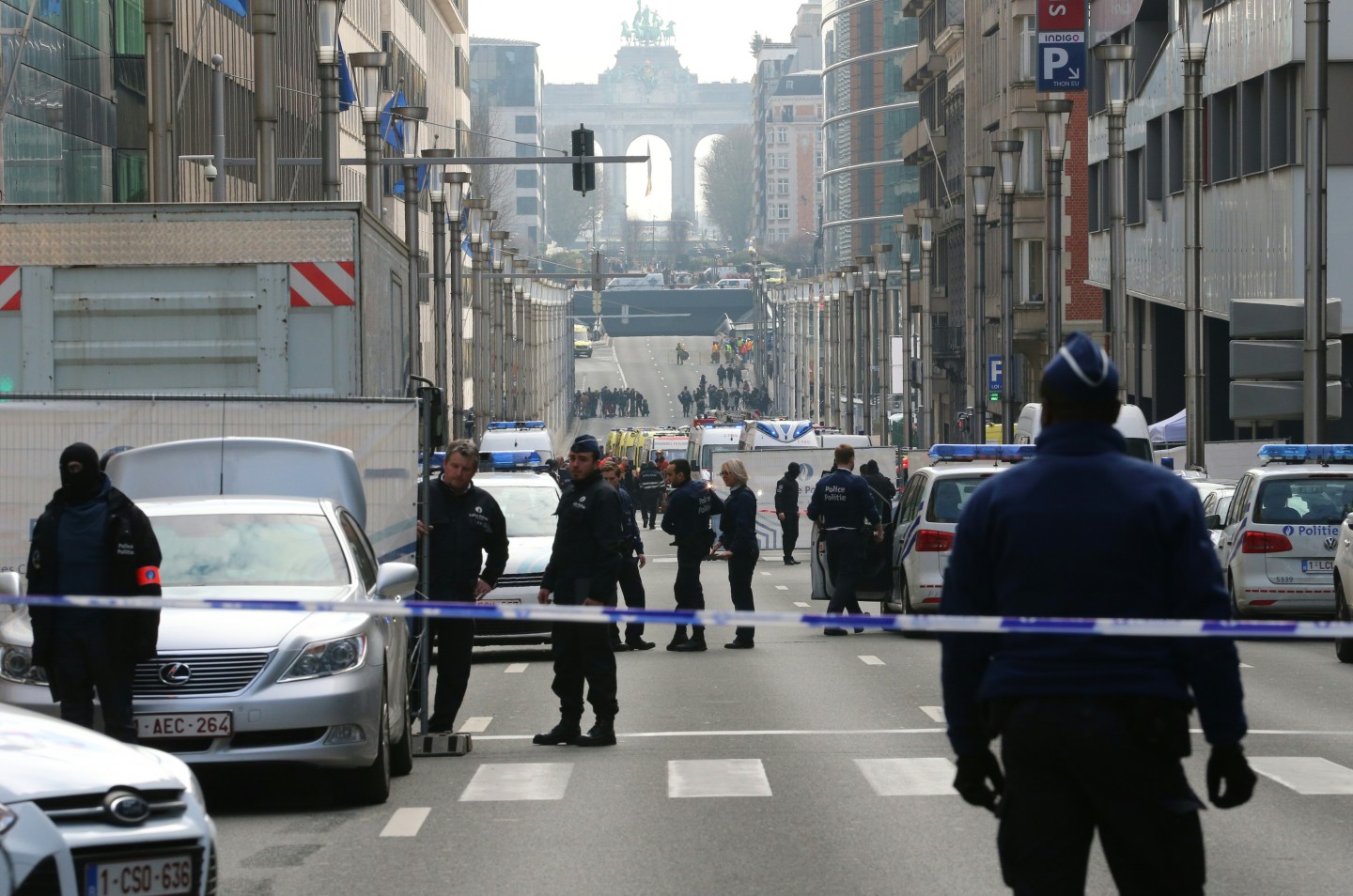 Policemen stand guard near a security perimeter set in the Rue de la Loi near the Maalbeek subway station, in Brussels, on March 22, 2016, after an explosion killed around 10 people, according to spokesman of Brussels' fire brigade A string of explosions rocked Brussels airport and a city metro station on Tuesday, killing at least 13 people, according to media reports, as Belgium raised its terror threat to the maximum level. / AFP / Belga / NICOLAS MAETERLINCK / Belgium OUT (Photo credit should read NICOLAS MAETERLINCK/AFP/Getty Images)
NICOLAS MAETERLINCK AFP/Getty Images

Following the jihadi attacks in Brussels on Tuesday, European countries will reportedly call for new legislation to give their security services direct access to telecommunications and other online data.

According to the Financial Times, which has a seen a draft statement that came out of a Wednesday meeting of EU justice and security ministers, countries will try to prompt a “sea change in EU thinking on privacy and security.”

“We are convinced of the need to…find ways, as a matter of priority, to secure and obtain more quickly and effectively digital evidence,” the draft read, according to the FT, which said the document also called for privacy safeguards.

According to the FT, the ministers will on Thursday call for new requirements to apply to “service providers that are active on European territory, leading to improved compliance and direct access by law enforcement authorities.” They will also urge Middle Eastern countries to provide assistance.

The suicide-bomb attacks, on Brussels Airport and the Maelbeek metro station, claimed the lives of at least 34 people. Turkey said it had warned the Belgian authorities about one of the attackers (reportedly Brahim el-Bakraoui) when it had caught and deported him previously.

The attacks came shortly after the arrest in Brussels of Salah Abdeslam, a key figure in the November Paris attacks. That event also prompted much talk about revisiting Europe’s attitude towards surveillance and privacy.

For more on the Brussels attacks, watch:

Under the EU system, individual countries largely retain control over their own security laws. Some, such as France and the U.K., are relatively enthusiastic proponents of surveillance.

At the EU level, though, surveillance programs such as the Data Retention Directive have tended to be struck down due to their incompatibility with fundamental rights. Whatever the ministers are calling for here could face significant hurdles, not least because a recent ruling in the European Court of Human Rights (to do with Russia) found big problems with systems that give the authorities direct access to people’s data.