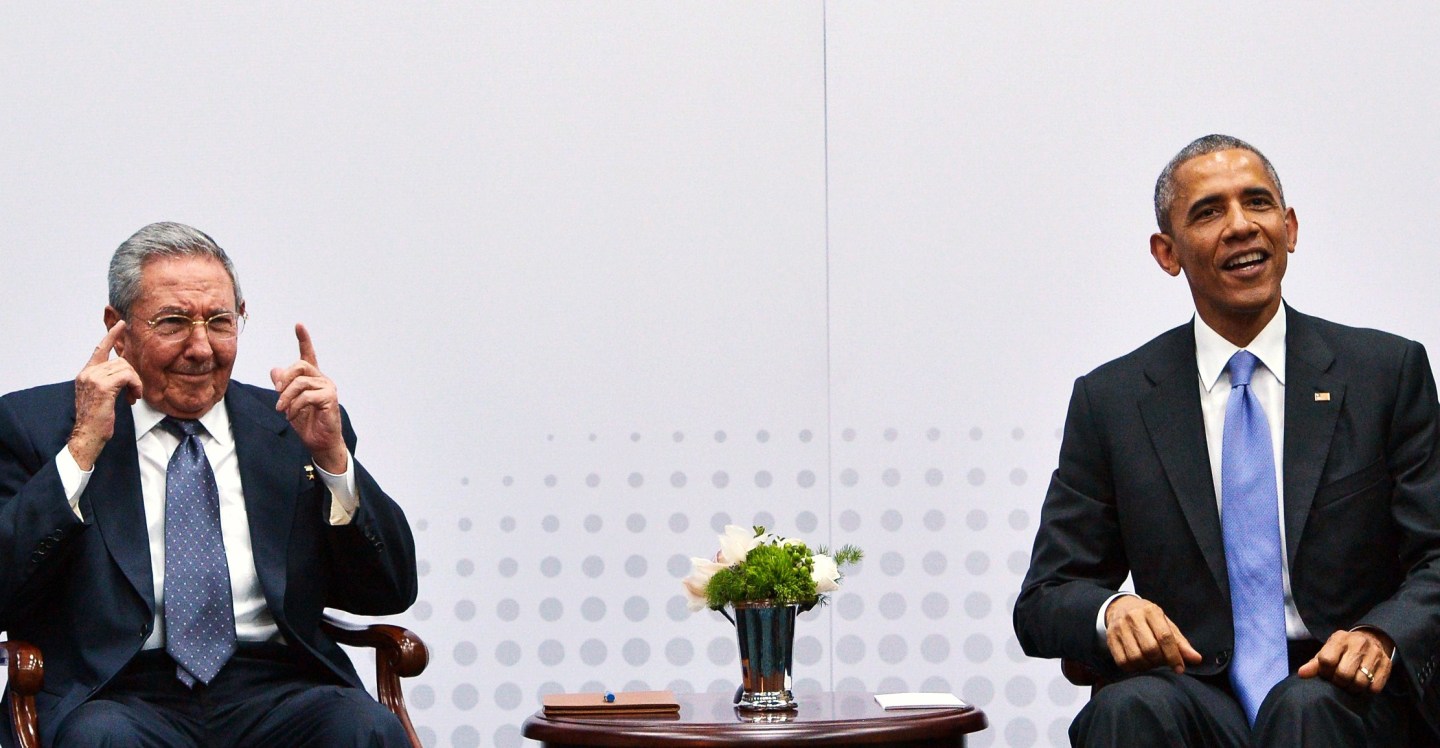 Cuba's President Raul Castro (L) gestures in response to a reporter's question during a meeting with US President Barack Obama (R) on the sidelines of the Summit of the Americas at the ATLAPA Convention center on April 11, 2015 in Panama City. AFP PHOTO/MANDEL NGAN (Photo credit should read MANDEL NGAN/AFP/Getty Images)
Photograh by Mandel Nga—AFP/Getty Images

Comparing those lists and the lightweight reality of Cuba’s economy, one has to wonder about the excitement. Cuba’s economy in 2013 was $77.15 billion, with a total population of around 11.3 million, making an average of $25 a month. Even with the most welcoming investment environment — and Cuba’s is far from that — the market potential is limited. So what’s going on?

The fact that Cuba has been off limits for more than 50 years gives it an undeniable coolness factor. Fidel Castro, brilliant for all of his misdeeds, played the coolness for all it was worth. Starting in the late 1990s, he and his top aides began wooing American farm bureau delegations to pitch the potential of Cuba’s untapped market. Tom Donohue, the long-time head of the US Chamber of Commerce, has been a regularly feted visitor — Castro spent hours talking with him — and the Chamber became an outspoken champion for ending the embargo. (In full disclosure, I keep a photo in my living room from my own late-night interview with Castro from 1985.)

Those visits were the start of a shift in political attitudes that made it comparatively easy here when Obama and Raul Castro announced in December 2014 that they would be restoring diplomatic relations. While the embargo is still in place (only Congress can lift it and this one is unlikely to give Obama the satisfaction), free trade Republicans are eagerly visiting Havana. In June, Republican Senators Pat Roberts of Kansas, Susan Collins of Maine and Arizona’s Jeff Flake (Flake flew to Havana again this week, this time on Air Force One) made the trip. Arkansas Governor Asa Hutchinson and Texas Governor Greg Abbott, who regularly touts his disdain for President Obama, have led delegations of agricultural and business leaders to Cuba.

Coolness is not all that Cuba has to offer, which is a good thing for them because that will fade. It also has a highly literate population, proximity to the US, great tourist potential (although too few nice hotels). And it has consumers, long cut off from the US market, who find American products cool. Cuba needs everything: food, home building products, high tech—assuming it can figure out how to pay.

The (now Raúl) Castro government says it is eager for foreign trade and investment. A few high-profile deals have been announced. Netflix (NFLX) launched a $7.99 a month streaming service last year—but given the low average salaries and the even lower Internet penetration, the demand can’t be great. Verizon (and soon Sprint) offers roaming services for US customers, tourists can rent rooms there through Airbnb, and an Alabama company, Cleber LLC, has gotten permission to build a factory near the port of Mariel to produce small tractors for Cuban farmers. Late last week, just before the president arrived, Starwood Hotels and Resorts signed a deal with the Cuban government to renovate and manage three luxury hotels.

In what would certainly be a big breakthrough for the Cuban people, Obama told ABC News on Sunday that Google “has a deal to start setting up more WIFI and broadband access on the island.” Google (GOOG) sounded less certain. In a Spanish-language blog post on Monday, the company announced it is bringing Google Cardboard and Chromebooks to a Havana museum, where visitors can connect to a government-owned Internet carrier, and said it is “also exploring additional possibilities to increase and improve access to the Internet, but these are first steps.” Most of the estimated 300 to 400-plus American business people who have gone on exploration trips in Cuba are still in the exploring stage.

President Obama has used his executive authority to loosen the embargo, including making it possible for US businesses to sell to some state-owned companies (what the government doesn’t control outright, it brokers, mediates, and takes a cut) and not just private entrepreneurs. But there are still so many restrictions that business and bank executives say they are often not sure what Washington will encourage or punish. If any embargo champions are cheering that, it is about the only victory they can claim.

The obstacles in Cuba are even higher, including a ban on foreigners buying most property; loosened, but still potent majority stake rules; slow payouts; and a fearful bureaucracy that can’t make any decisions without approval from the highest level. And the highest levels are profoundly ambivalent.

When Obama and Castro agreed to reestablish relations they had very different goals. They still do. The Cubans are hoping they can get enough cash from the deal to keep their people satisfied and most of the old repressive regime intact. Obama is hoping that opening Cuba up to American business, tourism and the Internet, will lead the Cuban people to demand more freedom.

On Monday, the president and Raul Castro gave a joint press conference in Cuba’s Palace of the Revolution, during which Mr. Obama declared that “freedom of speech and freedom of assembly and freedom of religion are not just American values but are universal values.” His words, along with Castro’s griping that “it’s not correct to ask me about political prisoners” were broadcast live on Cuban state television. I am betting on Obama’s vision and on the Cuban people.

Carla Anne Robbins is an adjunct senior fellow at the Council on Foreign Relations (CFR). She is also clinical professor of national security studies at Baruch College’s School of Public Affairs.