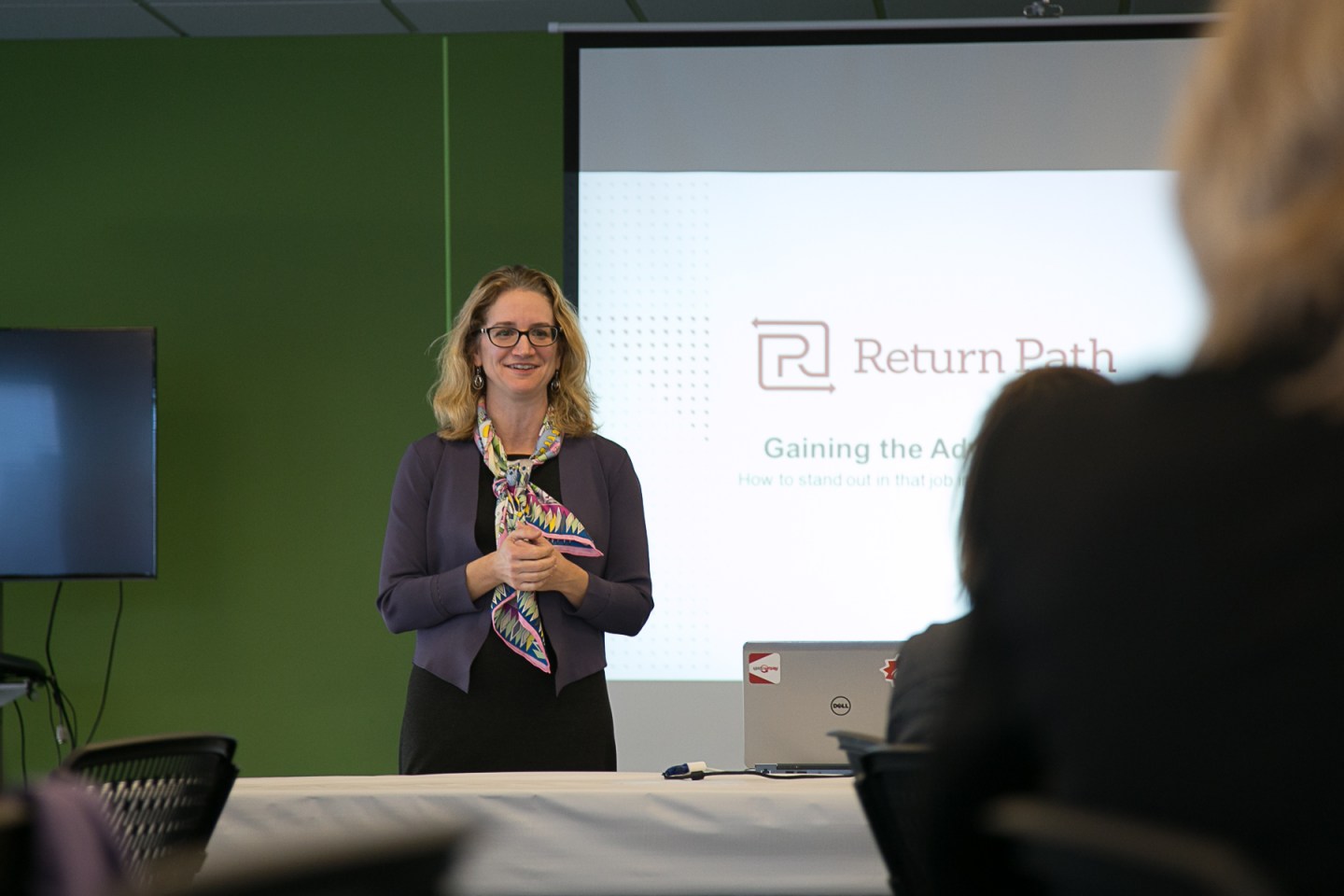 When Marina Groothuis wanted to return to full-time work after 12 years as a stay-at-home mom and yoga teacher, the industry she’d left—direct marketing in the music industry—had completely transformed.

Streaming music had replaced MP3s, which had replaced CDs. Even the terminology used to describe the work she’d done had changed. “It was all ‘integrated’ marketing and ‘inbound’ marketing,” she says. The field “as I knew it ceased to exist.”

That left her resume blatantly out-of-date, and employers noticed.

In June, Groothuis began to apply for jobs—about 50 per week for three months. She estimates she received a response from 1% of the companies she applied to. “I just didn’t have enough current experience,” says Groothuis, who used to be an associate marketing director in customer acquisition at BMG.

Fast forward six months and Groothuis is a marketing analyst at Return Path, a data provider. What happened in between her futile job search and now? A 20-week paid “returnship” at Return Path designed for professionals who had taken time off work for caregiving responsibilities. The New York-based company has hosted two returnship cohorts since last January, and it helped five other companies introduce their own programs in October. PayPal onboarded nine software engineers to returnships earlier this year.

On Tuesday, Return Path CEO Matt Blumberg announced that the company is spinning off the program into a separate nonprofit called Path Forward, whose aim is to help companies set up mid-career internships for individuals—parents and other caregivers—who’ve been out of the workforce for a few years.

What started as an internal Return Path initiative to increase the representation of women, particularly in technical roles, had grown so successful that the company figured it could launch the program as a standalone operation. Indeed, more than 80% of the 30 participants across six companies were offered continued employment at the conclusion of the program.

The program answers a vast need, particularly among women looking to return to the workforce. A study published by the Center for Talent Innovation in 2010 found that 31% of highly qualified women voluntarily left their jobs in 2009 for an average of 2.7 years. Nearly three-fourths of women who downshifted their careers attributed the change to childcare issues. Nearly nine of out 10 women who left their jobs said they wanted to resume their careers, and while 73% succeeded in returning to their careers, only 40% found full-time, mainstream work.

A more recent poll in 2014 of nonworking adults ages 25 to 54 by the New York Times, CBS News, and the Kaiser Family Foundation found that 61% of women said that family responsibilities were keeping them home; just 37% of nonworking men gave that same answer. Of the women who identified as homemakers and had not searched for a job in the last year, nearly three-quarters said they would consider returning to the workforce if a job allowed for flexible hours or let them work from home.

Companies can increase female representation in the office by convincing women to stay in the workforce or by making it easier for them to return. Path Forward focuses on the latter.

The nonprofit will help corporations’ human resources departments set up mid-career internships—for a flat fee—with a few parameters in mind. The internships are to be 20-week, paid positions available to individuals—both men and women—who have been out of the professional workforce for at least two years to care for children, a spouse, or a parent. The hope is that employers will hire interns as full-time workers at the end of the temporary stint. Companies will choose whom to hire for their programs, but Path Forward’s website will serve as a database for all the available positions.

For the individual worker, Path Forward is a bridge from their last job to a new one; it’s fresh experience to put on their resume, and it eases them back into office culture. For the employer, the program is intended to serve as an introduction to an experienced and underutilized talent pool.

“It has the power to create an on-ramp for companies to see how they can leverage this talent,” says Tami Forman, former vice president of corporate marketing at Return Path who is now Path Forward’s executive director. And individuals “can see how they can contribute again.”

The “returnship” idea is not new. In fact, Goldman Sachs trademarked the term in 2008. Likewise, J.P. Morgan, Morgan Stanley, and Credit Suisse have also offered such programs.

Path Forward could bring the model beyond white collar workplaces, namely to tech firms, which tend to tout their progressive work environments and, more often than not, desperately need an infusion of female talent.

Why wouldn’t such companies just hire younger, cheaper workers straight out of college? Courtney Graham, head of HR for ReadyTalk, one of the five companies that launched a returnship program in October, says her Colorado-based company “wants a diverse group of people with different levels of education and experience.” Also, people who have served as caregivers “bring a unique value” to the workplace, she says. Graham says she plans to promote Ready Talk’s program through PTA networks and parent Facebook groups.

For a program like Path Forward to be effective, it has to bring individuals back into the workforce in roles that value their experience, instead of sidelining them to B-list jobs, says Laura Sherbin, director of research at the Center for Talent Innovation. “There’s a troubling trend where the punishment doesn’t fit the crime,” she says. Women sacrifice their careers to serve as caregivers and then they have a long, uphill struggle to return. When they do come back, Sherbin says, they’re working at lower levels, often for less pay.

Groothuis’ role at Return Path is different from the one she left, but she says her compensation is “almost” what she was earning at BMG. She’s still working from home one day a week but has generally adjusted to the hour-long commute into Manhattan from Long Island. And she says that her two daughters, whom she spent 12 years with as a stay-at-home mom, are “really proud” of her return to the workplace.