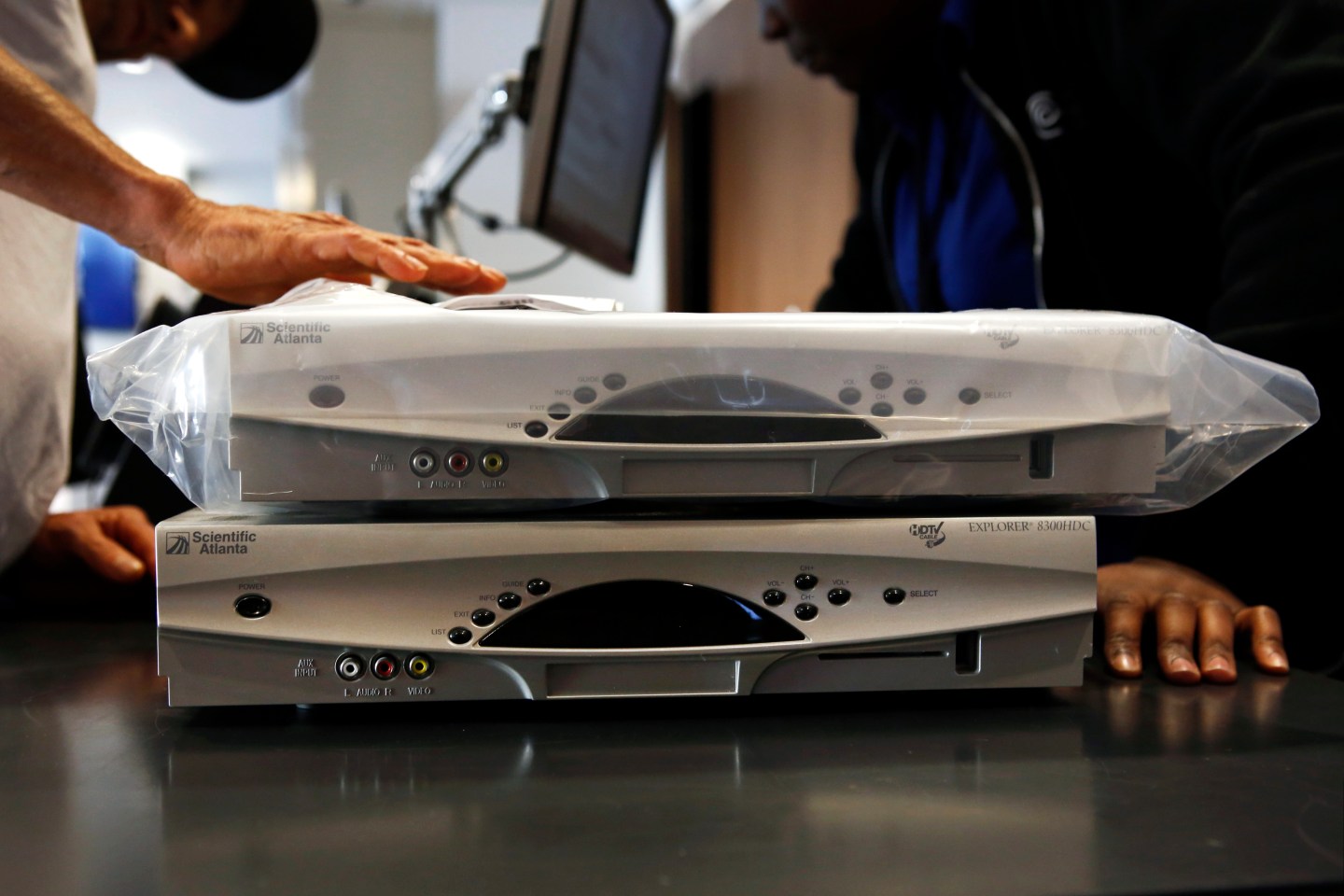 A customer exchanges cable boxes at the Time Warner Cable store in Torrance, California, U.S., on Monday, Aug. 12, 2013. Time Warner Cable Inc. said it's talking with CBS Corp., after a breakdown in negotiations led the cable provider to block its customers from seeing the network. Photographer: Patrick Fallon/Bloomberg via Getty Images
Photograph by Patrick Fallon — Bloomberg via Getty Images

For decades, there was practically no regulation of cable TV service. This had left consumers at the mercy of cable providers. For many years, the cable company was the only provider of video at home, in most parts of the country. Video was sent via a cable box belonging to the cable company and running a program’s guide interface reminiscent of 1970’s-era computers, not only predating Windows, but also predating DOS 1.0. The setup in cable TV has been very much like the pre-1981 MA Bell monopoly: The company owns the appliance (box, telephone) and you have to rent it. You can only buy channels in bundles. Even if you watch only five channels, you have to buy bundles of over 100 channels to cover the five you want, and you must pay for all of them.

However, in the last couple of years, radical change has arrived to the video–at–home market. The emergence of inexpensive “smart” TVs allowed for new streaming video companies such as Netflix (NFLX), Hulu, and Amazon (AMZN) to reach home consumers bypassing the cable company. For those TVs that were not-so-smart, add-on hardware such as Roku, Apple (AAPL) TV, and Amazon Fire TV ensured that the streamers had access to the TV, again bypassing the cable box. With cable service prices and cable boxes’ rental fees skyrocketing, hundreds of thousands of cable customers have cut the cable cord.

In this environment, The Wall Street Journal reported that Federal Communications Commission Chairman Tom Wheeler is preparing to circulate a draft order to approve Charter Communications’ deal to buy Time Warner Cable—a merger that could very well open competition for cable TV boxes. Such regulations level the playing field of competition between the cable company and the streaming services. The big beneficiaries are the consumers who will end up paying only for what they watch, and paying much less. Expect millions to cut the cable cord. And innovation will finally reach the cable TV world. With 40 years’ delay, we might see a TV programming guide with a graphical interface and 21st-century search capabilities.

As traditional monopolists, cable companies will fight tooth and nail to prevent this change that will cut significantly into their revenues. But is this the demise of cable TV companies? Not at all. The streamers need Internet service, and, presently, coaxial cable is the premier way to deliver broadband Internet residential service. In most of the country, cable companies face competition only by DSL service of telecom companies—a service of much lower speed compared to cable. So I expect, within a few years, cable companies to focus much more on Internet delivery and less on video sales. Technological change has wiped out the old cable box monopoly. The FCC is just putting the nails on its coffin. Hurrah for the new multi-purpose video box and interface!