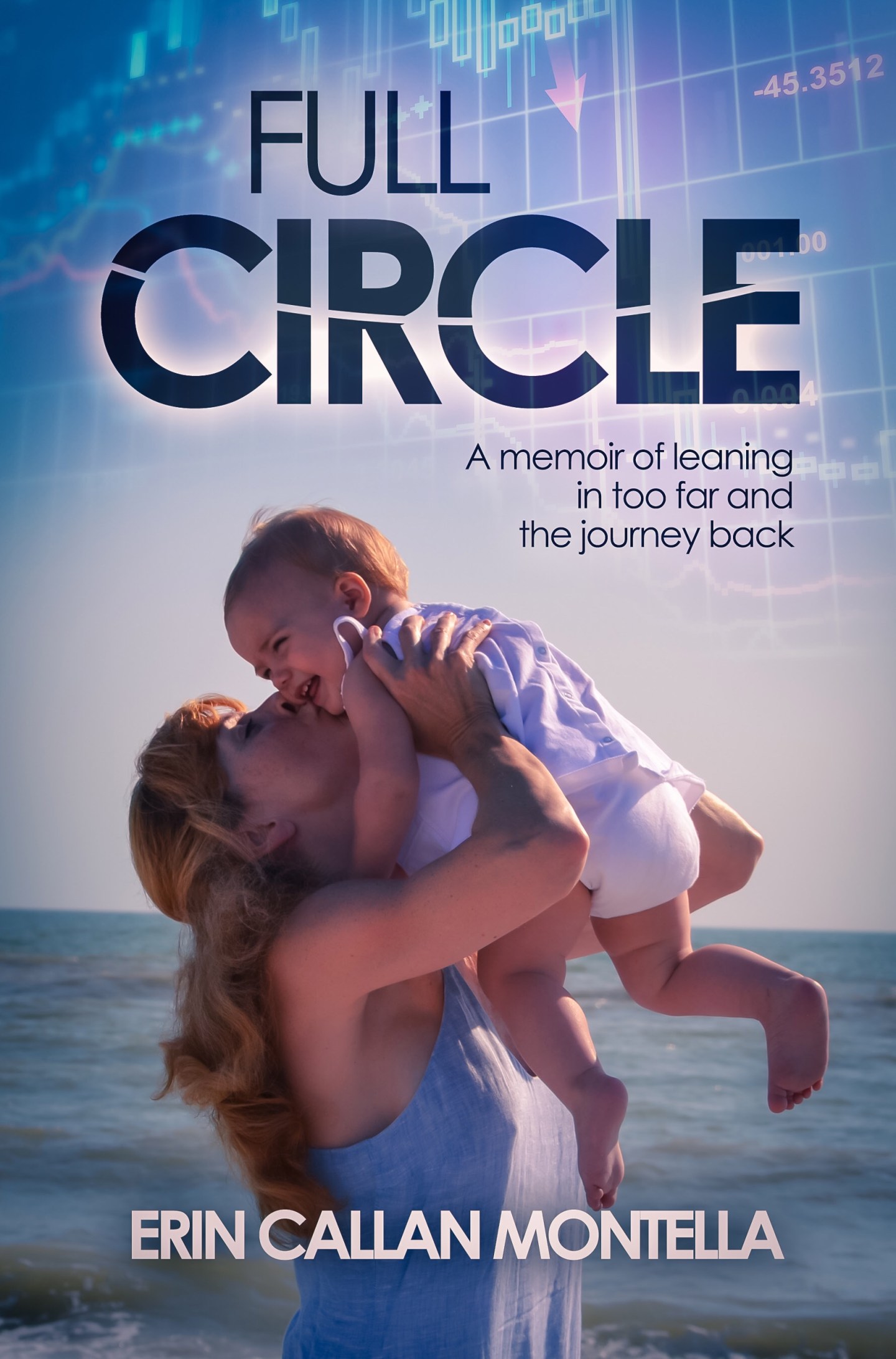 The biggest shock is the book’s cover: a picture of a middle-aged woman wearing a sundress and long, red flowing locks, joyfully lifting a giggling baby in front of a deep blue sea. The author, Erin Callan, who was the chief financial officer of Lehman Brothers before the Wall Street giant collapsed in 2008, has a new name: Erin Callan Montella. And a new life, with an ex-firefighter husband and a one-year-old daughter. And to the surprise of just about everyone—because no one from her former business life saw this coming—Callan, who recently turned 50, has written a memoir. She self-published the book, and it’s available on Amazon today.

With Full Circle: A memoir of leaning in too far and the journey back, Callan takes control of her controversial career story and tells it with candor and finesse and self-understanding that comes only after many years, much distance, and a slow recovery from her critical role in the rise and fall of one of Wall Street’s most storied firms. Beyond providing an insider’s perspective that will engross people who savored Wall Street tomes like Too Big to Fail, Full Circle reveals details that make this book far more personal—and sometimes juicier—than the other books that have been published.

For example, on the night before Christmas Eve in 2008, six months after Callan lost her CFO job at Lehman, she admits, she tried to commit suicide. Her boyfriend, Anthony Montella, her onetime high-school classmate who is now her husband, found her and called 911. Soon after, Callan quit a new job that she had just taken, post-Lehman, at Credit Suisse—and, at least to Wall Street watchers, she fell off the face of the earth.

I’m the only journalist who wrote a major story about Callan after she quit Wall Street and disappeared. When I was reporting that Fortune story, “The Fall of a Wall Street Highflier,” in early 2010, I spent months trying to track Callan down; I never found her, instead getting my information from many people who knew her and had worked with her and had lost track of her as well. After the story appeared in Fortune in March 2010, I never heard from Callan. So, you can imagine my surprise last week when I got a voicemail from her. I called her back, and she told me that she had written her memoir—and she did not intend it to be a Lean In type of guide to life and career. It’s simply her story, she said.

Whatever Callan’s intentions, Full Circle is, in fact, a worthy counterpoint to Sheryl Sandberg’s Lean In. While Lean In, which hit the market with extraordinary fanfare three years ago, counsels women to be more confident and risk-taking in their careers, Full Circle warns about the dangers of overconfidence and risk-taking—and in her book, Callan attempts to redefine success.

And she does that quite well. She offers valuable lessons not just for women, but for anyone striving for a successful life. Such as:

– Don’t do something just because you’re good at it. “I confused success with passion,” Callan writes. “I was a woman not only looking to take a leadership role in a male-dominated industry, but doing anything to make that happen.” After graduating from Harvard and building early success as a lawyer at Simpson Thatcher, she moved to Lehman and climbed the ladder nimbly, nourished by positive feedback—which she wasn’t getting in her personal relationships. As work became her source of identity, her ego-booster, and her joy, “the dirty underbelly of career narcissism wasn’t apparent,” she writes.

– Leaning in can be good—but know what you’re leaning into. In February 2007, when former Lehman president Joe Gregory told Callan, then 41, that he and CEO Dick Fuld wanted her to be the firm’s new CFO, Callan was shocked, reluctant, and ill-equipped for the job—even if the financial markets hadn’t started to melt down. Now, she realizes, “I was willfully distracted as I kept moving up the ladder from job to job, focused on the next rung. I was never forced to evaluate exactly where I was because I didn’t pause to catch my breath to even consider it.”

– Own your power. This is the irony of Callan’s success: As she climbed the ladder, she felt ever less powerful, because the more she took on, the less she was able to control in her professional life and her personal life as well. Six months after she became CFO and the first woman on Lehman’s 13-person Executive Committee, she lost her job. Her first marriage ended too.

Only after multiple crises—a career crash, an attempted suicide (she took a bottle of sleeping pills), a desperate search for a new purpose—Callan found what she calls “post-traumatic growth.” She needed “to run into a wall at a hundred miles an hour and fall down with stars circling my head.” She also needed a kind and strong partner—Montella, who had rescued victims at the World Trade Center on 9/11 and lost many of his work buddies that day—to pick her up and help her find a new reason for living.

As it turned out, the fancy Wall Street job and the big pay didn’t so much give Callan power as it sucked power out of her. After getting no severance package when she exited Lehman in June 2008—and after the firm filed Chapter 11 bankruptcy that September—Callan says she spent so much money on lawyers and legal settlements that she thought she might have to file for personal bankruptcy. “It never came to that,” she writes. And in February 2015, after years of trying to have a child, she gave birth to a daughter, Maggie. “I’m finally living up to my potential,” writes Callan, who now lives with her family in Florida.

Sometimes, losing a job frees you up to find power somewhere else.