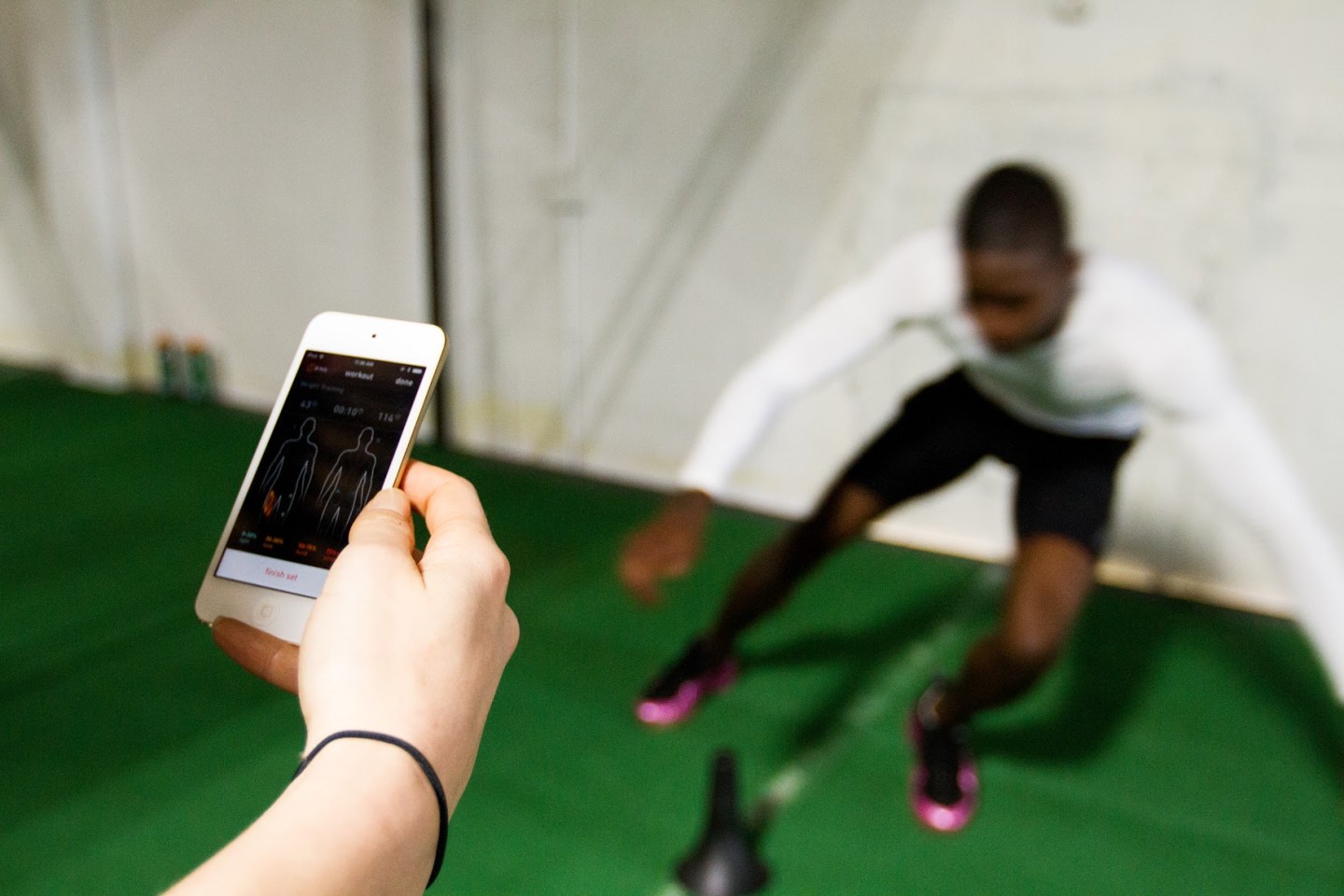 On a rainy Thursday morning a few weeks ago, a dozen NFL hopefuls took over Proactive, a rooftop gym in Santa Ana, Calif.

By the door, a series of palm-sized devices—black in color and oval in shape, giving them a profile reminiscent of the long-departed Motorola Pebl phone—charged in pods. Piled next to them were several pairs of stretchy black shorts and long-sleeved shirts. Used together, the items become Athos, a wearable technology system that measures the electrical signals generated by muscles to instruct the wearer how to improve his or her workout technique.

The football players warmed up by jogging on treadmills and rolling out their hamstrings with hard cylinders of foam. Then the men took off their T-shirts and tank tops and replaced them with the snug, wetsuit-like Athos gear. The black compression apparel, studded with gray plastic panels for embedded “biosignal” sensors, would be their uniform for the weeks leading up to the NFL scouting combine in Indianapolis. There, the hopefuls would run through a battery of tests to show off their physical and mental prowess to the league’s brass. (This year’s combine took place from Feb. 26 to 29.)

There are a plethora of fitness trackers on the market: Apple’s (AAPL) popular Watch, various Fitbit (FIT) models, Jawbone’s Up. But for those who want to do more than count steps taken and calories burned—say, an athlete whose future career may depend on how many consecutive times he can bench press 225 pounds—the Athos system offers muscle-specific information that can be analyzed and acted upon immediately.

When Jeremy Cash, a Duke University athlete who plays the position of safety, started training with Athos, the system told him via its smartphone application that he was using his triceps more than his pectoral muscles during the bench press. The app displays an outline of the human body and illuminates which muscle groups are working. Orange indicates moderate activity, red means maximum effort.

“By simply extending my grip on the bar,” he said, “I was able to use more of my pectoral muscles.”

Has he increased his reps?

As Cash and his peers trained in the gym, Ryan Capretta, Proactive’s owner, coached them. He watched Sheldon Day, a defensive tackle for Notre Dame, practice his vertical jump by swatting plastic flags affixed to a tall pole. “After each jump make sure you’re getting a full extension of your butt,” Capretta said. “Your left glute fired quite a bit more.” This is another metric Athos measures: Whether the right or left side of the body is working harder than the other. (Capretta started using Athos in his gym last year.)

Given all the information that Athos collects, having an expert on hand to assess it—and hold the smartphone that’s displaying the data—seems necessary. But the company, which is based in Redwood City, Calif. and backed more than $50 million in funding, hopes to serve as a personal trainer for the amateur athlete, too. The app’s “in between sets” view offers feedback on how hard a user is working out without requiring the supervision and cost of a human.

“Let’s say you’re doing squats,” said Jake Waxenberg, an Athos marketer. “Hit ‘start’ on the app, do your squats, put the bar down, grab your phone, and you can see the results of what just happened. Were you balanced? Were you using your glutes like you’re supposed to? How hard did those glutes work?”

He added: “It’s that type of feedback that you get in between the sets that the average person uses. Trainers don’t coach you during the movement. They coach you between sets.”

A men’s full body package (which includes a shirt and shorts embedded with 26 sensors and a “core,” the black Bluetooth-enabled oval that powers the sensors) costs $547, about the same as an Apple Watch but five times as much as a basic Fitbit One. Women’s leggings start at $149; women’s tops are expected soon.

Part of the system’s appeal is its visualization confirmation. There is a sense of satisfaction that an Athos user receives by activating a muscle and seeing it glow red with agony. After I pulled on a pair of leggings—with considerable struggle, tugging them this way and that like a pair of wet jeans (Waxenberg said the second generation of Athos apparel will be stretchier)—Capretta led me through a series of lunges.

The app showed my right quadricep lighting up more than my rear. I squeezed my glute until it turned red on the screen, prompting Capretta to bellow: “Yeah!” It was like slamming down the mallet at an amusement park strength test and basking in the wake of a piercing ding! Later, during my usual, Athos-less workout routine, I tried to remember to squeeze (or “activate,” in trainer-speak) whatever muscle was on deck, picturing it burning crimson.

The football players also enjoy the validation. Before he began using Athos, Cash said he didn’t bother to track his progress in the gym. “You’d just go in there and you’d just lift,” he said. It’s this kind of rote routine that Athos seeks to stop.

“We collect data in a way that makes it actionable,” Waxenberg said. “Data is useless. Data doesn’t help anybody. Answers are useful. Answers help people.” Or at least motivate Athos athletes to reach for the next scarlet trophy for a job well done.