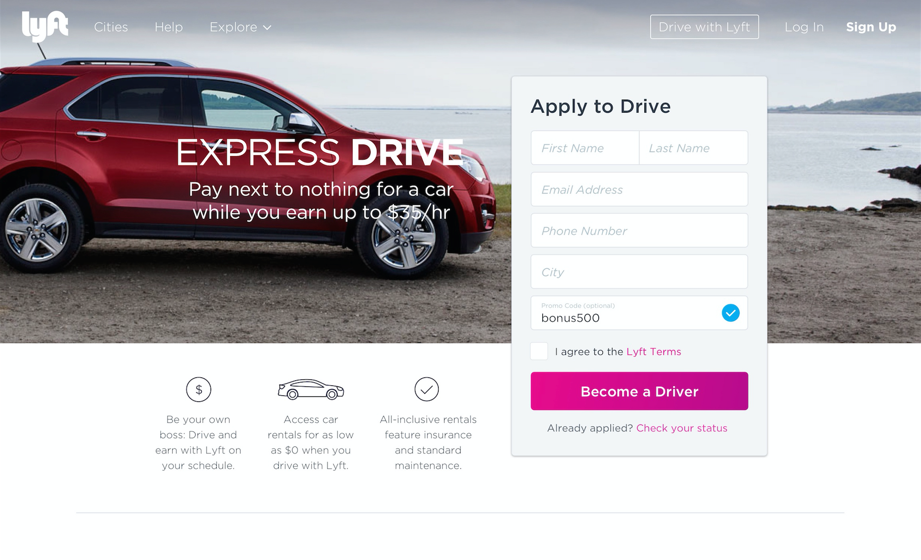 The Express Drive program, which will kick off in Chicago and then head to Baltimore, Boston, and Washington, D.C., is a signal that the two companies are beginning to act on a partnership that was announced in January. GM also invested $500 million into Lyft at the time. The service will be eventually offered in cities across the U.S., Lyft co-founder John Zimmer told Fortune in a phone interview.

The recent partnership is part of automaker’s long-term vision: a network of GM self-driving cars within Lyft’s service that can shuttle passengers around town without a driver. But with self-driving cars still years away, GM (GM) and Lyft are focusing their efforts on building out the service. And that means more drivers.

Finding drivers who own a “qualifying” car is the Lyft’s biggest obstacle to scaling its business, Zimmer said. In Chicago alone, there were 60,000 people who applied to become a driver, but were denied because they didn’t have a car that qualified. Between all four cities, some 150,000 people were denied because their cars didn’t qualify. Under Lyft’s rules, a car must be a 2004 or newer (in some cities the vehicles must be at least a 2008 model), have four doors, and pass other basic safety requirements such as functioning lights and seat belts.

“We’ve now made car ownership optional on both sides of the two-sided market,” Zimmer said, explaining that now drivers and riders can use the service without owning a car.

Lyft as well as rival Uber have a history of drumming up ways to attract drivers, even for people who don’t own cars. Uber announced in December a program that gives Uber-approved drivers in Denver access to discounted rental cars through Enterprise Rent-A-Car. In October, Lyft announced a deal with Hertz to provide its drivers with lower daily, weekly, or monthly car rental rates.

The Express Drive program will initially offer 125 Chevy Equinox crossovers to Lyft drivers in Chicago. Drivers can rent the car between one and eight weeks and will be rewarded the more they drive. The cars will be rented out for $99 a week and 20 cents a mile to drivers who complete 40 rides or less a week. Once they surpass that number, the per-mile charge is dropped. If a driver completes 65 rides or more in a week, the rental is free. The rental fee covers the cost of insurance and maintenance. GM will shoulder the cost of the maintenance.

Of course, the question is how likely is it that the average driver will exceed 65 rides a week. Lyft doesn’t share those numbers. But a spokeswoman did say that the average Lyft driver completes three rides an hour. A quick back-of-the-envelope equation and a driver would have to work nearly 22 hours a week to hit 65 rides.

“We’re looking to scale quickly,” said Julia Steyn, GM’s head of urban mobility, during a conference call with reporters. “We’re still assessing the demand, it seems very strong.” Steyn said the program aims to build infrastructure that is a critical and important step to its plan to jointly develop and integrate an on-demand network of autonomous vehicles.

Over the past seven months, GM has announced a number of initiatives and acquisitions that illustrates its aggressive push into unconventional transportation such as car-sharing as well self-driving cars.

GM also purchased the assets of the defunct Sidecar, and last week shelled out more than $1 billion for self-driving tech startup Cruise Automation.

The Cruise Automation acquisition follows GM’s move to create a team dedicated to the development of self-driving car technology within the company.

Lyft, in the meantime, benefits from a major company with easy access to cash as well as a global footprint—the very resources the startup needs if it hopes to compete with rival service Uber.