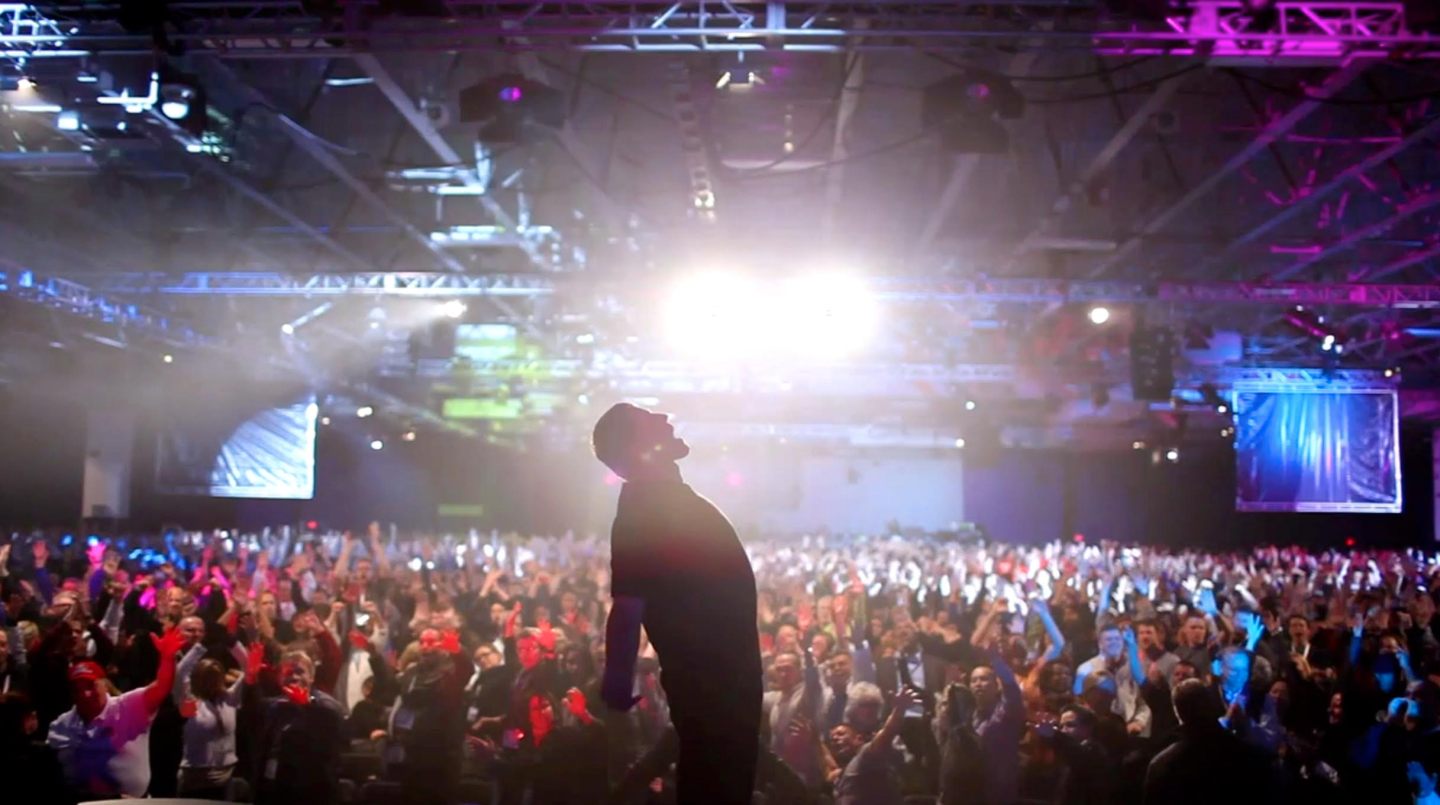 Attendees at South by Southwest (SXSW) on March 14 will experience something that very few people have. The new documentary film, Tony Robbins: I Am Not Your Guru, from director Joe Berlinger, makes its world premiere in Austin, Texas before heading to Netflix (NFLX) this summer. The film takes viewers inside Robbins’ “Date with Destiny” six-day workshop in Florida, which 2,500 people attend annually at a cost of nearly $5,000 each.

Robbins claims to have coached more than 50 million people from over 100 countries through his live events and bestselling books. And CEOs and top executives pay Robbins big bucks for his advice, and celebrities from Oprah to Anthony Hopkins have attended his workshops. Although Berlinger has said the documentary is not “meant to defend or promote Tony Robbins’ methods,” it’s clearly a positive view of Robbins and his work. With a paperback version of Robbins’ latest book, Money: Master the Game: 7 Simple Steps to Financial Freedom, now available, and the new documentary heading to Netflix with positive buzz, Fortune caught up with the life coach and business strategist. Answers have been edited for clarity.

Fortune: Why did you decide to cooperate with this movie?

Robbins: I met Joe Berlinger through Brian Koppelman, who created Ocean’s Thirteen and the Showtime series Billions. I liked Joe, personally, and so I invited him to the event…And he saw these pretty amazing miracles happen. There was a Marine with massive PTSD who just came back from Afghanistan, and at one point he picked up a microphone and said, “I don’t know what I’m going to do with my life,” and his hand was just shaking out of control. He wore glasses because he had light sensitivity. And he had migraine headaches and was having a hard time sleeping. I worked with him, and about 30 minutes into it all, the shaking stopped...So that hooked Joe.

How much freedom did you give Joe Berlinger to make the movie he wanted to make?

He had total freedom. I wasn’t going to be in control of it at all. All I asked him was to make sure that these interventions that are shown for ten minutes of the film and last for an hour or two hours in real-time, were told so that the true story is told.

I also asked him not to edit the film until a year later, when you can actually see what’s happened to these people and show what the final results were.

Dancers Derek and Julianne Hough and actress Maria Menounos are shown attending this conference. How often do you get celebrities at this event?

Over the years I’ve had tons of celebrities come and experience this program, including Oprah, Usher, and Anthony Hopkins. Celebrity or not, we’re all people, and we all have needs.

I can remember Tony Hopkins going through these 14-hour days and we’re trying to give him privacy with security around him so no one would bother him, and he kept raising his hand and I kept ignoring him. So finally he stood up and he said, “You don’t need to protect me any more.” So I called on him. And he said, “I just want everybody here to know that I’ve been Knighted by the Queen, I’ve won an Academy Award, and I’ve never felt like I feel right now from this experience.”

Now, let’s talk about politics. What do you see when you look at the current crop of presidential candidates?

Chaos. Oh, my God. Who would have thought we would be with Donald Trump in the position that he’s in? And who would think that you would have people trading insults over the size of people’s hands and other parts on the national stage? It’s quite wild. It’s not something I think any of us were prepared for.

Speaking of Donald Trump, what do you see as his dominant personality traits?

Well, domination obviously. He talks with certainty all the time; he’s an extraordinary entertainer. I know Donald very well. And he’s a very successful businessman.

I mean people are so tired of Washington that we’re going from one extreme to the next extreme. It’s happening with the Democratic Party, too. Bernie Sanders is certainly getting huge crowds of people. You have two absolute opposite extremes in our society. It just shows how frustrated people are that there’s so little progress, and there’s no progress because there’s nothing but the demonization of Congress. It used to be guys would fight like hell over policy and they’d go have a beer together. And now to even speak to the other side, you’re branded for life as a traitor.

What are your thoughts on the income equality in America today, which has been a big issue with the presidential race?

It’s disgusting, it’s unfortunate, and it’s driven by two things. It’s driven by the fact that technology now provides a greater return than labor does. In order for labor to do well today, you can’t be low cognitive, low skill sets, high backbone. That’s done by machines today. It has to be high cognitive and highly personally directed. And unfortunately our school system and our backgrounds don’t really gear people up for that. We need a massive retooling.

What can people learn from your book, Money: Master the Game, especially now in this time of volatility?

When I interviewed David Swensen from Yale, who’s a rock star of institutional investing, he said: “There’s only three things that can increase your net return: security selection, timing, and asset allocation.” But asset allocation is 100% of your returns because timing is going to be wrong, and stock selection costs you some money in time. So..diversification is the only way to go, according to everyone that I’ve interviewed.