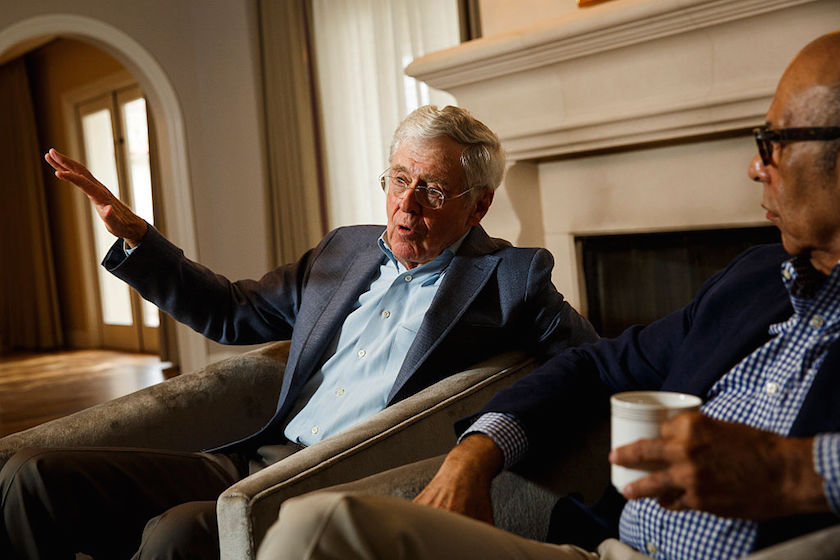 Income inequality is a complicated issue. The U.S. is the richest and yet most unequal country in the world when you consider wealth, according to Allianz. And yet, there is economic mobility; many Americans shift income brackets, with 70% of the population experiencing at least one year in the top 20th percentile of income and 53% landing in the top 10th percentile in at least one year.

But as the disparities in wealth and income have become more marked, the national conversation over income inequality, as well as how to shore up America’s middle class, has gained urgency. It has even become a cause célèbre with surprising bedfellows. Democrats and Republicans have both focused on the topic, albeit with different solutions in mind. Harvard Business School alumni have cited it as a major concern — just like union activists and minimum wage workers at the fast food protests.

And billionaires are no exception. Entrepreneur and investor Nick Hanauer, who sold his Internet advertising company to Microsoft for $6 billion in 2007, most famously warned fellow one-percenters, “If we don’t do something to fix the glaring inequities in this economy, the pitchforks are going to come for us. No society can sustain this kind of rising inequality.” But he has plenty of company. Some are concerned on moral grounds; others cite the impact on the economy. Here are seven other billionaires who say they are worried about how income inequality will affect America.

Estimated net worth: $1.1 billion
Occupation: Goldman Sachs Chairman and CEO
What he said: “”Too much of the GDP over the last generation has gone to too few of the people,” he told CBS. “[Income inequality is] responsible for the divisions in the country. The divisions could get wider. If you can’t legislate, you can’t deal with problems. [If] you can’t deal with problems, you can’t drive growth and you can’t drive the success of the country. It’s a very big issue and something that has to be dealt with.”

What he said: “As the economy gets more specialized … as a natural consequence, a lot of the wealth flows to the top. And, of course, you expect unequal results in a market economy, very unequal,” Buffett told Reuters. “But you really shouldn’t have an economy with over $50,000 in GDP per person and have lots of people living in poverty who are willing to work. I mean, that makes no sense and we need governmental policies to correct that.”

What he said: “High levels of inequality are a problem—messing up economic incentives, tilting democracies in favor of powerful interests, and undercutting the ideal that all people are created equal,” Gates wrote on his blog. “Capitalism does not self-correct toward greater equality—that is, excess wealth concentration can have a snowball effect if left unchecked.”

What he said: “The global equalization of wages and the exponential growth in technology has created a job-killing machine that’s only going to get worse,” CNBC quoted Greene as saying. “If we added an extra trillion to national debt, we could rebuild these underground pipes and schools and hospitals and give hope to people,” he said. “That would get the country through this difficult period. And it would help make the U.S. more competitive again.”

What he said: “[T]he American worker is also getting ‘screwed,’” Icahn wrote in a policy paper quoted by Yahoo Finance. “[B]oards and CEOS have allowed property, plants and equipment of our companies to become the oldest on record and, as a result, the growth rate in productivity per hour of our workers has also become the worst on record and has actually decreased compared to last year. The average age of corporate property, plants and equipment is an astounding 22.3 years, the oldest it has reached since 1941. But I do not believe that most boards and CEOs really give a damn. With many exceptions, CEOs only care about short term results. Perhaps you can’t really blame them because unfortunately, Wall Street judges them based on quarter to quarter results and CEOs receive their egregious compensation based on those short-term results. … When it comes time to pay the Piper, CEOs will have taken their bonuses and again the workers will be left, holding the proverbially ’empty bag.'”

What he said: “This chart is corporate profit margins going back 40 years as a percentage of revenues, and you can see that we’re at a 40-year high of 12.5 percent. Now, hooray if you’re a shareholder, but if you’re the other side of that, and you’re the average American worker, then you can see it’s not such a good thing,” Jones said in a TED talk. “Now, higher profit margins do not increase societal wealth. What they actually do is they exacerbate income inequality, and that’s not a good thing. But intuitively, that makes sense, right? Because if the top 10 percent of American families own 90 percent of the stocks, as they take a greater share of corporate profits, then there’s less wealth left for the rest of society.”

What he said: “We’re headed toward a two-tiered society — a society that’s destroying opportunities for the disadvantaged and creating welfare for the rich,” Koch said in a talk during the summer. “Misguided policies are creating a permanent underclass, crippling our economy and corrupting the business community.”