This Anti-Drone Bazooka Knocks Offending Aircraft Out of the Sky 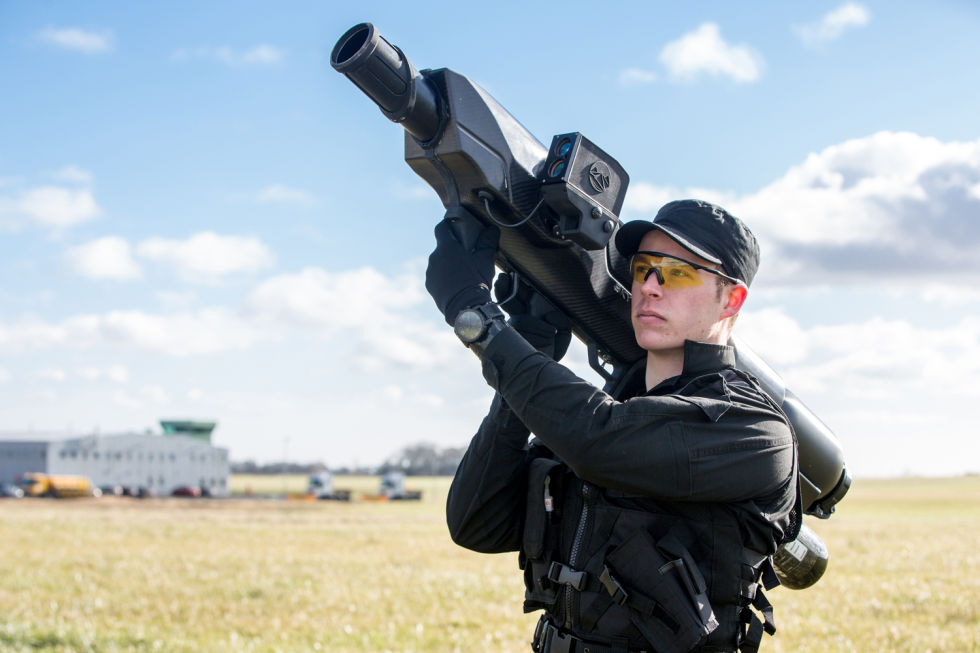 As consumer drones proliferate, their potential public safety threat has increased. British company OpenWorks Engineering aims to take on the threat with a shoulder-fired weapon that ensnares drones in a net and sends them softly parachuting to the ground.

The SkyWall comes in three flavors, according to the company’s sales brochure. The shoulder-fired SkyWall 100 is operated like a portable anti-aircraft weapon, launching an assortment of drone-disabling projectiles at offending unmanned aerial vehicles. The SkyWall 200 is the same basic system mounted on a tripod for additional stability. The 300 model operates via mechanized turret.

The idea is to allow the user to select the right projectile for the job. While in some cases it might be reasonable to let a captured drone plummet to the ground, that wouldn’t be the best idea over a crowded area, or in a case where recovering the drone intact (for use as evidence, for instance) is advisable.

The electronic countermeasure version is presumably targeted toward site security, like nuclear power plants or secretive corporate or government facilities. It could be deployed when a user wishes not only to bring down the drone, but also to keep it from broadcasting any data it might have been collecting. It would also ensure that any nefarious cargo aboard the drone—something like an improvised explosive device, for example—would not be able to receive an electronic signal either.

But how exactly does one target a drone darting across the sky? The SkyWall uses a built-in targeting optic it calls “SmartScope” and an onboard targeting computer that adjusts for the effects of gravity and the speed of the drone to tell the operator exactly when to launch the projectile.

The computer not only helps the user target the drone but programs the projectile as well. Once launched, the projectile knows how long to wait before deploying its net, doing so just as it is passing the target. Given the wide area of the unfurled net, the user only has to get the projectile close to the target rather than intercepting it directly.

The 22-pound shoulder-fired SkyWall 100 should go on sale for a yet-to-be-revealed sum later this year. The 200 and 300 models will follow.