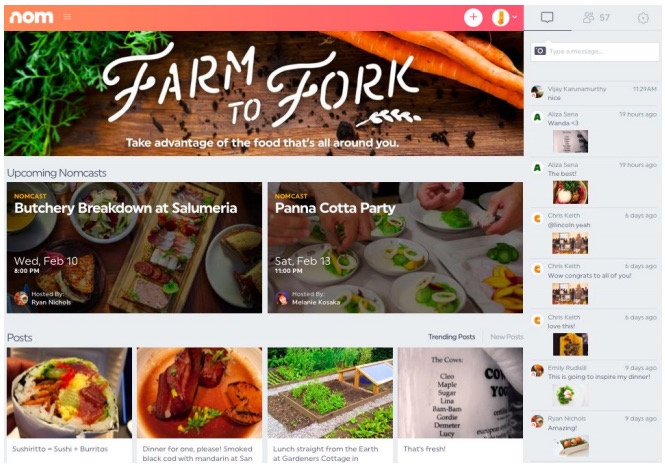 Want to embrace your inner Rachael Ray? Nom, a new video service by YouTube co-founder Steve Chen will give you the chance.

Chen and Nom CEO Vijay Karunamurthy have co-founded and built a new live video streaming site with the initial goal of letting people show off their food prep skills.

So far, the service has a few restaurant professionals in California demonstrating culinary skills or the creative side of running a restaurant. But Chen, who is also CTO at Nom, says he’s hoping to add streams about making coffee soon.

“We noticed that the most popular videos at YouTube showed people making things,” Chen says. But Chen and Karunamurthy felt that for those doing the making and those watching, YouTube doesn’t offer a real interactive experience. You can’t easily ask questions and present a live video experience without a significant delay.

Enter Nom. The company has created an app launching on Wednesday for mobile phones and PCs that lets people share video, photos, and GIFs. It can let a single person stream or include multiple camera angles. What makes it more than a fancy live video streaming tool is the ability to have a two-way chat with the audience that can handle, text, photos, and even video questions.

That’s the technical secret sauce Nom has worked out and what Chen and Karunamurthy say is a latency-free method to share questions via video between the host of a Nom channel and the audience. Neither would go into how they are sharing instant real-time video streams, but with live video being a must-have element of any social platform, Nom is latching onto a big trend.

Karunamurthy believes there is still plenty of opportunity for a service that offers more tools and a better experience for the creators. Currently, Twitter’s Periscope offering is a rather blunt instrument, basically turning a camera on an event. Google’s Hangouts can be streamed to a larger, live audience, but the experience is fraught with technical difficulties.

There is also the difficulty of building a double-sided market of waters and video-streamers. With YouTube, which Google purchased in 2006 for $1.65 billion, it took years before the platform matured into a juggernaut for web video. At the time, many thought Google paid far too much, but in hindsight, that was a small price to pay to have a prominent seat at the web video table.

This time around, the appeal of live video is well understood. So to seed the site with high-quality content Nom has signed up professional chefs, including Corey Lee and master sommelier Yoon Ha of Benu in San Francisco, Boston pastry chef Joanne Chang, Tim Hollingsworth of Otium in downtown Los Angeles, Hubert Keller in Las Vegas, and Michael Tusk of Quince in San Francisco.

For more on the thrill of launching a live-streaming video site at SXSW, watch:

The content, the experience, and a launch at South by Southwest in Austin, Texas (where live-streaming app Meerkat was the breakout star in 2015) are all aimed at enticing users to test the app and then start contributing. Chen wants to see bloggers, professionals, and anyone else who is passionate about food contribute to the Nom.

Karunamurthy and Chen say they aren’t focused on making money off the site initially. But Karunamurthy speculates that he could imagine advertisers of various foods or kitchen gadgets being happy to sponsor shows. He doesn’t anticipate something like a paywall being implemented.