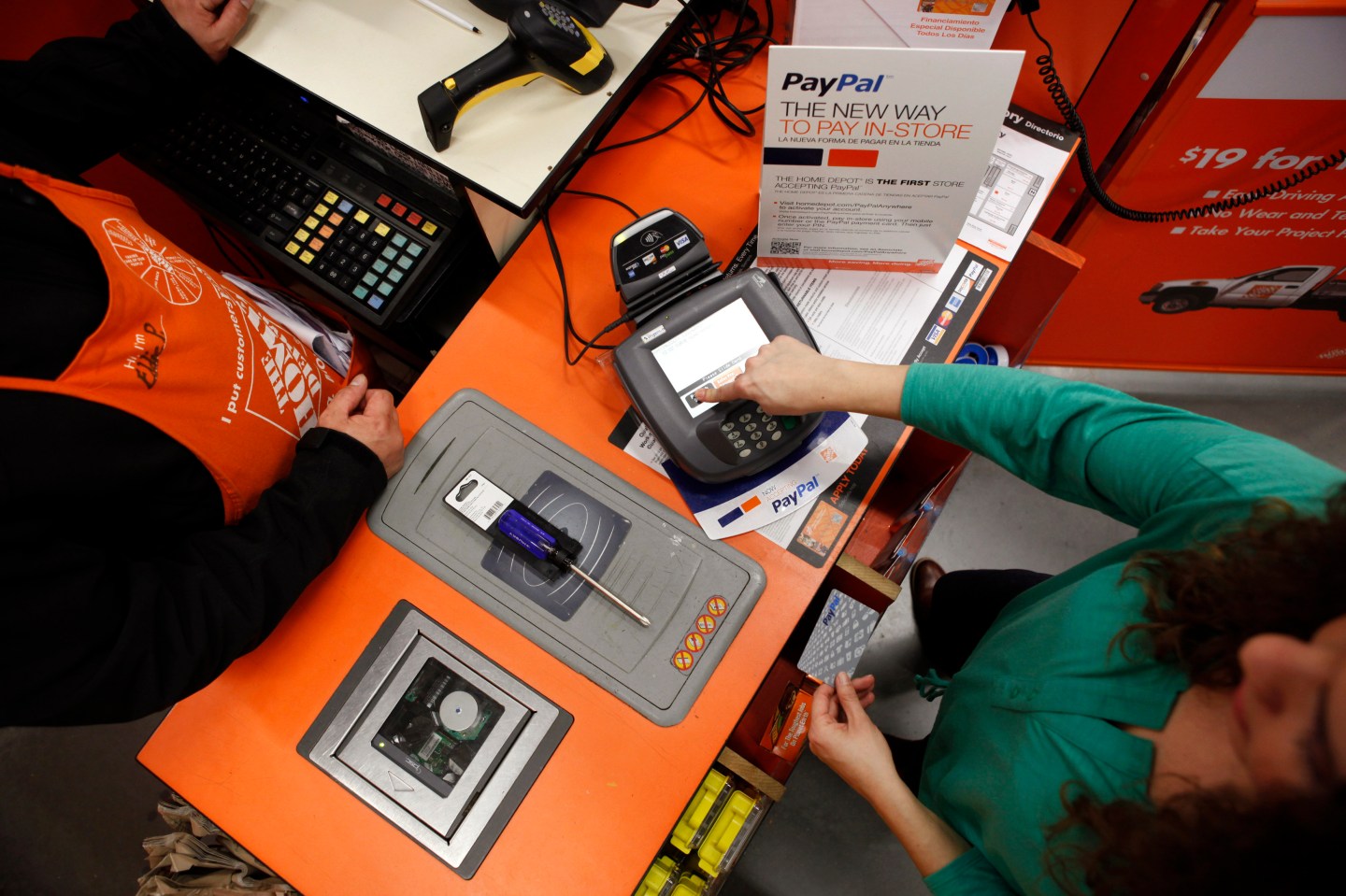 A Home Depot employee (L) and a public relations representative demonstrate how the PayPal card works at a cashier station at a Home Depot store in Daly City, California, February 21, 2012. EBay Inc, which owns PayPal, has set a public goal of 20 major retailers testing the point-of-sale, or POS, service by the end of 2012. Home Depot, the largest home improvement retailer, is running a test already and Office Depot is planning one. REUTERS/Beck Diefenbach (UNITED STATES - Tags: BUSINESS SCIENCE TECHNOLOGY) - RTR2Y81M
Photograph by Beck Diefenbach—Reuters

The home improvement retailer will set up a $13 million fund to reimburse shoppers for out-of-pocket losses, and spend at least $6.5 million to fund 1-1/2 years of cardholder identity protection services.

Home Depot also agreed to improve data security over a two-year period, and hire a chief information security officer to oversee its progress. It will separately pay legal fees and related costs for affected consumers.

Terms of the preliminary settlement were disclosed in papers filed on Monday with the federal court in Atlanta, where Home Depot is based.

Home Depot (HD) did not admit wrongdoing or liability in agreeing to settle. The settlement requires court approval.

“We wanted to put the litigation behind us, and this was the most expeditious path,” spokesman Stephen Holmes said. “Customers were never responsible for any fraudulent charges.”

Home Depot has said the breach affected people who used payment cards on its self-checkout terminals in U.S. and Canadian stores between April and September 2014.

It has said the intruder used a vendor’s user name and password to infiltrate its computer network, and used custom-built malware to access shoppers’ payment card information.

Home Depot said it has booked $161 million of pre-tax expenses for the breach, including for the consumer settlement, and after accounting for expected insurance proceeds.

For more about Home Depot, watch:

Lawyers for the consumers said the accord compares “favorably” with other data breach class actions, including Target Corp’s $10 million settlement over a 2013 data breach that compromised at least 40 million cards.

Legal fees and costs for the lawyers could top $8.7 million, court papers showed.

At least 57 proposed class action lawsuits were filed in U.S. and Canadian courts over the data breach. The U.S. cases were consolidated in the Atlanta court.