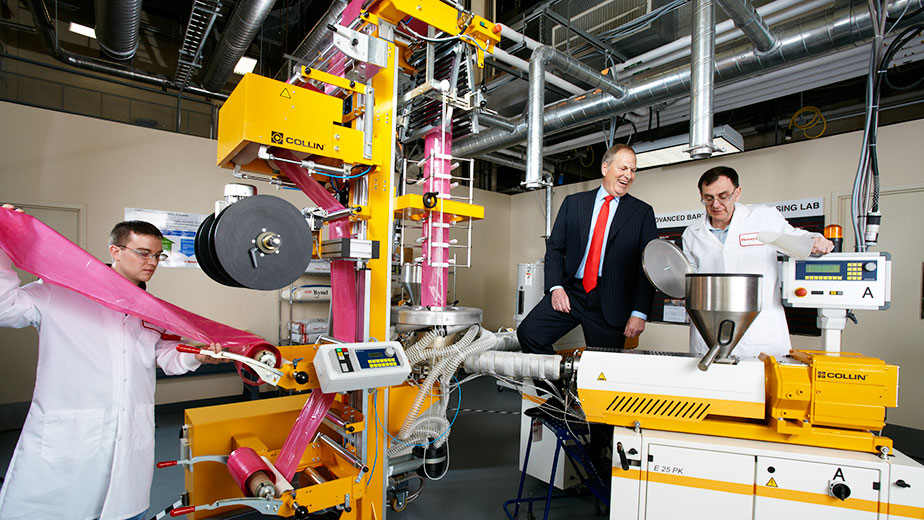 Dave Cote (left) in a New Jersey lab where Honeywell is developing a new nylon copolymer that can be used in food packaging. Around his office he typically wears jeans instead of a suit.
Photograph by Robyn Twomey for Fortune

It’s been widely reported that United Technologies Corp. (UTX) is rejecting Honeywell’s $90 billion offer on grounds that the deal will never win antitrust approval. Fortune has learned about another potential, and surprising, obstacle to what would be one of the largest industrial mergers of the new millennium. According to a source familiar with United Technologies’ thinking, the Honeywell offer stipulates that its CEO, Dave Cote, would run the combined aerospace and building supplies conglomerate, and grant United Technologies’ current CEO Greg Hayes no role in the new company.

That condition is somewhat baffling, because Cote is turning 64 in July, and Hayes, who took charge in late 2014, is only in his mid-50s. A likely scenario, designed to sell a deal to Honeywell’s board, would have proposed that Cote serve as CEO until retirement, say at 65 in mid-2017, to be succeeded by Hayes, who’d serve as COO in the interim. But Dave Cote, arguably the best industrial chief executive in America, isn’t planning a career-capping deal as a parting triumph. If he wins United Technologies, he apparently plans to run the new colossus for years to come.

The Cote governance plan didn’t appeal to Hayes or the United Technologies board, according to the source, who declined to be named but is close to the situation. The source says another Cote gambit troubled United Technologies: On Sept. 30, Cote submitted a formal offer to the board — without calling Hayes to inform his fellow CEO that the bid was coming. Another interesting, unreported detail: Honeywell stated that the combined company would boast a price-to-earnings ratio of 16.1, far higher than United Technologies’ current, extremely depressed multiple of around 10.5.

Indeed, the timing of Cote’s new campaign is probably no coincidence. Since peaking in March of last year, United Technologies’ share price has dropped 26%, erasing $29 billion in market value. Even at Honeywell’s offering price of $108, representing a fat 19% premium to United Technologies’ current valuation, Honeywell would still be paying a P/E of 12.5. So if Cote’s math is correct, the deal would generate tremendous value for Honeywell shareholders.

Honeywell declined to comment on any of the details of the negotiations. But in a press release late in the afternoon of Feb. 23, Honeywell stated that “we do not see the regulatory process as a material obstacle to a transaction.” That directly contradicts the view that Hayes voiced Tuesday morning on CNBC, when he claimed that United Technologies’ attorneys stated that the regulatory problems were insurmountable.

The Honeywell release lauds the potential combination as “stronger than the highest valued peers.” The statement makes it clear Cote really wants this deal, and doesn’t rule out a hostile bid to make it happen. It’s likely that the master strategist is pondering his next move.