See The Smartphone That Can Bend, Not Break 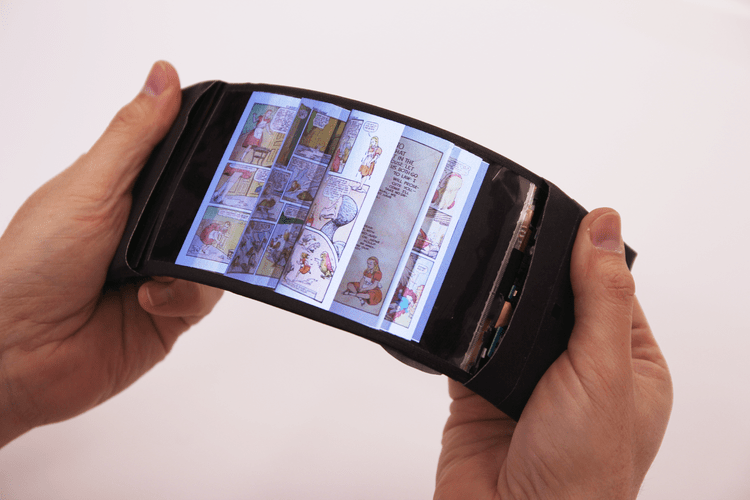 It’s called “ReFlex,” and it’s built to bend and vibrate, giving users a better sense of a third dimension on their phones as they read, get directions, or play games.

Researchers from the Human Media Lab at Queen’s University in Canada revealed their lightweight prototype at the Tangible Embedded and Embodied Interaction conference in The Netherlands on Wednesday.

With a bendable phone, readers could quickly thumb through books, feeling for highlighted passages or “dog eared” pages. The bendy phone could also help drivers keep their eyes on the road, making it possible to “feel” turn-by-turn directions. And on games like Angry Birds, players could bend their screens to stretch out a slingshot with vibrations that make the phone feel like a ricocheting rubber band.

But perhaps the most exciting feature of the new bendy prototype is the fact that it is essentially shatterproof.

The big secret behind a phone that’s more durable and lightweight? The screen is plastic, not glass. The tradeoff could be a deal-breaker in a smartphone industry dominated by glass screens.

The phone uses off-the-shelf parts, which means a leap to market wouldn’t be a huge jump. Professor Roel Vertegaal, who led the team behind the phone, says it is technology twelve years in the making.

“The phone is mass produceable as it is today,” Vertegaal says.

But Vertegaal, whose academic research has been sponsored by the Canadian government and Canadian touch tech company Immersion Corporation, isn’t going to build a consumer phone. That, he says, he’ll leave it up to the “Samsung’s and the LG’s of the world.” (He estimates it could take another three to five years to bring the tech to market.)

The LG OLED display in the phone is the same tech behind bendable TVs. At about $100 a pop, these LG smartphone screens cost $25 more than a typical glass screen but make the new Android device strong enough to bend up to 40 degrees. The phone is more flexible in the center with semi-rigid ends while the 1,280 x 720-pixel display has a slightly worse resolution than an iPhone 6 at 1,334 x 750 pixels.

This isn’t the first time we’ve heard promises of a bendable phone on the horizon. Nokia demonstrated their prototype, “kinetic” bendable phone back in 2011. Just last year, Samsung filed a U.S. patent for a foldable smartphone.

But neither company has released anything for consumers yet. It’s hard to know if a bending phone would ever be able to compete against the juggernaut iPhone, which sucked up 91% of mobile device profits in 2015.

Facebook Wants To Bring A Virtual Reality-Like Experience To Your Phone:

Still, just as the trees bend in the wind, a smartphone that can bend in your pocket could come in handy, if one is ever released.