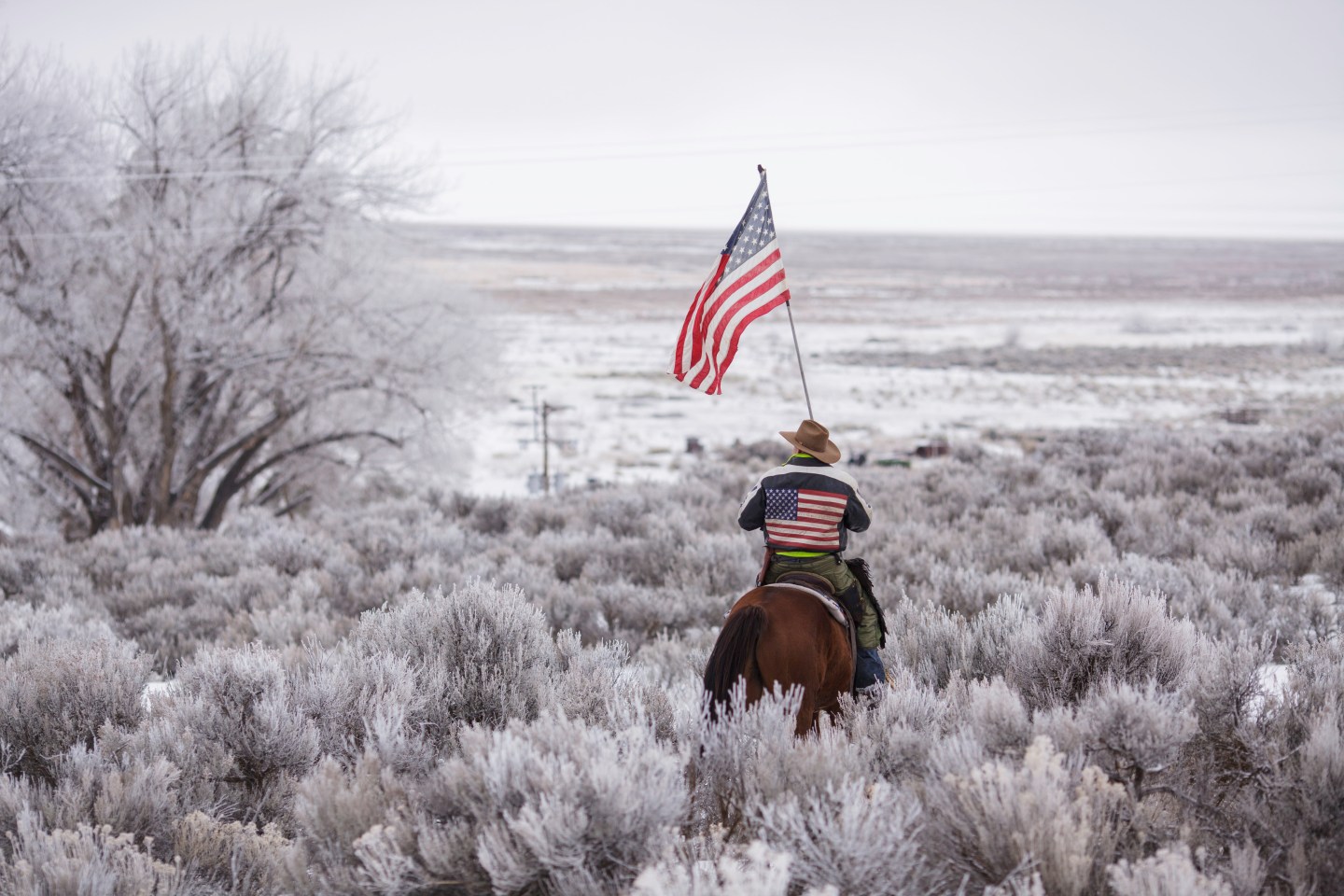 TOPSHOT - Duane Ehmer rides his horse Hellboy at the occupied Malheur National Wildlife Refuge on the sixth day of the occupation of the federal building in Burns, Oregon on January 7, 2016. The leader of a small group of armed activists who have occupied a remote wildlife refuge in Oregon hinted on Wednesday that the standoff may be nearing its end. AFP PHOTO / ROB KERR / AFP / ROB KERR (Photo credit should read ROB KERR/AFP/Getty Images)
Photograph by Rob Kerr via Getty Images

Although the illegal occupation of the Malheur National Wildlife Refuge in Oregon is ending as the four people remaining at the site prepare today to surrender to federal authorities, the struggle to protect our public land continues. In the U.S. Senate, legislators of both parties are considering legislation that supports the Land and Water Conservation Fund (LWCF), arguably the most successful and important land conservation program in the nation’s history. The 50-year-old program was threatened with extinction last fall, but a measure pending in the Senate would permanently authorize it to continue working for the American public. And President Obama has just proposed spending $900 million for LWCF – the maximum amount possible – in his new budget

These actions in Oregon and Washington, D.C. are focusing new attention on our public lands, particularly in the West. The reality is the phrase “public lands” covers a wide and varied network of federal, state and local public places that belong to all of us, from national parks like Yellowstone and Yosemite, to urban outdoors such as Griffith Park in Los Angeles. More and more Americans are living in cities, and many of the nation’s fastest-growing cities are in the West. All these people need places to get outdoors. Ideally, people in cities and rural communities should live within a 10-minute walk of a nearby park and its benefits.

While getting outdoors is good for our physical and mental health, parks also contribute to a community’s economic health. A new report from Headwaters Economics, a non-profit focused on western economies, found rural counties in the West with the most federal lands did better economically than other counties. Those counties saw faster growth in population, employment, personal income, and per capital income growth. That report mirrors analyses by the Outdoor Industry Association, showing that outdoor recreation generates 6.1 million jobs a year, and $646 billion in consumer spending. These reports reinforce that in the 21st century, the main value of our public land for the largest number of people is recreation, not mining or other “extractive” industries which have been the basis of traditional western land use and livelihoods.

Despite what the armed extremists who took over the Malheur Refuge would have us believe, the vast majority of Americans support protecting our lands. In fact, most western voters agree that having land owned by all of us is good for the economy and they strongly oppose selling it off. This further confirms what my organization has found to be true for more than 25 years—land protection is an issue that has long been supported by voters of both parties. Since 1988, voters have approved $71.7 billion to conserve land in more than 1,800 state and local elections in 43 states, voting to tax themselves to protect the lands they love. In 2014 alone, 35 measures passed.

The U.S. government now owns more than 640 million acres of land, about 28% of the total land mass of the United States, and the vast majority of that is in the West.How did all that land end up under federal ownership? Through a variety of methods, including war, purchase, treaties with other nations, and outright seizure from the Native Americans. It began with the Louisiana Purchase of 1803 and continued through the Oregon Treaty of 1846, the Mexican Cession under the Treaty of Guadalupe Hidalgo in 1848, and 1867 purchase of Alaska, along with the 19th century wars against the Native Americans. To this day land is still being acquired for the public, particularly in and around cities where so much of our population growth occurs and where people need to connect with nature and the outdoors.

But despite all the favorable arguments and public support for public lands, the struggle to “take back” federal lands continues in Oregon, Alaska, Arizona Nevada, New Mexico, Wyoming, and Colorado. In Utah, state officials are considering a lawsuit against the federal government and are asking other states to join the iffy proposition they believe they can win in the courts what the states have been unable to win from Congress. But the effort does have its supporters in Congress, including Rep. Rob Bishop, R-Utah, chair of the powerful House Natural Resources Committee. Last year, Bishop and colleague, Rep. Chris Stewart, R-Utah, created a Federal Land Action Group to develop “framework for transferring public lands to local ownership and control.” It is not clear that any of the states which claim to want these lands could or would devote the resources to actually manage them, and thus could be forced to sell them to companies or individuals who would use them for drilling or mining.

That would be a shame, for all of us. America’s system of public lands, including federal, state and city parks, is unrivaled in the world. In 1872, the United States created the world’s first national park, Yellowstone, and the National Park Service (NPS) itself was created 100 years ago, the first such organization in the world. In fact, so many other nations look to the United States for help in creating parks that the NPS has created an international affairs office. America’s public lands are one of our greatest shared heritages. In 1983, the great author Wallace Stenger wrote, “National parks are the best idea we ever had. Absolutely American, absolutely democratic, they reflect us at our best rather than our worst.”Stegner was correct. While he was referring specifically to our national parks, his words can be expanded to cover all our public lands. We need to make sure we’re protecting them, for now, and for the future.

Will Rogers is the President of The Trust for Public Land.