This Oxford B-School Solar Startup Is Lighting Up East Africa 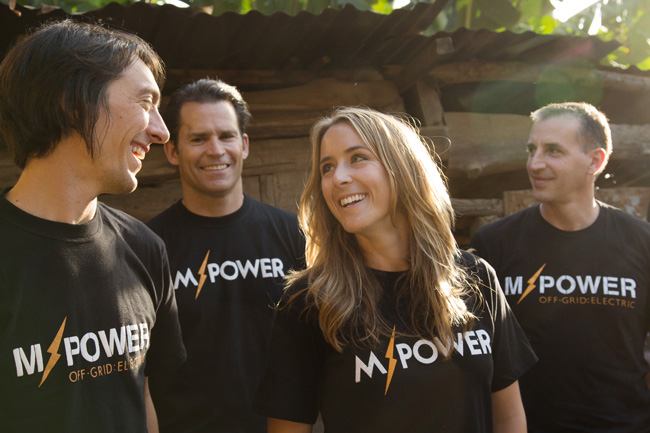 Xavier Helgesen had dealt with more than a few unexpected twists since moving to Tanzania after graduating from Oxford University’s Saïd Business School in 2011. But one in particular left him stumped.

The villagers using his company’s solar lighting kits put the brightest lights on the porch, leaving the inside of their homes dark. Nothing he’d studied in Oxford’s venerable classrooms could explain the behavior. So he went back to his customers, primarily poor Tanzanians living without electricity, for an answer.

He learned that the company’s LED lights had become something of a status symbol; leaving them outside was comparable to parking a new car in the driveway. Plus, people tended to spend most of their time outdoors, so it made sense to illuminate their primary living space.

This was one of many lessons Helgesen would learn after co-founding Off Grid Electric in 2011 with fellow Oxford MBA Erica Mackey and Joshua Piece, the company’s CTO. Off Grid Electric provides pre-paid solar energy at affordable prices to people living off the grid, meaning those who aren’t connected to electricity or simply can’t afford it.

More from Poets&Quants: The Investors Behind The Top MBA Startups

For $6, Off Grid Electric will install a home solar kit, which includes solar panels, LED lights, a meter, and a USB charger for cell phones. Customers pay via mobile phone to unlock the energy they need. Off Grid claims their pricing is equal to or less than what customers currently pay for kerosene, batteries, and phone-charging services. In a country where only 15% of the population had access to electricity in 2012, according to the World Bank, the market demand was clear. Getting investors on board was a different story.

Though ostensibly a social enterprise, Helgesen eschews the squishiness of the term, which can be slapped on just about anything these days. He’d prefer to measure Off Grid Electric against the same metrics used to assess private sector businesses. “Honestly, I think we would probably rank well if you just wanted to put us in the venture fund category,” he says.

He’s right. The company came in at No. 16 on Poets&Quants’ Top MBA Startups of 2016 after raising $51 million in venture capital. If you include debt financing, grants, and prizes, that number doubles to approximately $108 million. While most of the company’s investors have an affinity for social enterprise, it’s a list any startup founder would envy: SolarCity; DBL Partners; Omidyar Network; and Vulcan Capital, a fund by Microsoft co-founder Paul Allen.

The company’s ambitions square more with the private sector than most social enterprises or nonprofits. Off Grid Electric provides electricity to 10,000 households and serves an average of 50,000 people each month. They’ve expanded to Rwanda this year and plan to reach 1 million homes by 2017.

Off Grid Electric is not Helgesen’s first foray into social entrepreneurship. After graduating from the University of Notre Dame with a bachelor’s in management information systems, he co-founded Better World Books with two classmates. They grew the company into a leading online book retailer with a triple bottom line. The company traded in used books (environment) and donated to literacy programs (social), while turning a profit (financial). It was also among the first B Corps, a group of companies committed to rigorous social and environmental standards.

Helgesen knew he had a good thing going, but he was ready to try his hand at something new. He wasn’t interested in cruising the standard MBA prospective-student circuit and spinning his wheels for two years to build a new career. Entering B-school at 31, he was older than the average U.S. MBA. Plus, he had a kid and a profitable business to run.

But Saïd appealed to him. For one, it was free. Helgesen had nabbed one of five Skoll scholarships, which cover tuition and provide a small living stipend. “If I hadn’t gotten the Skoll scholarship, I don’t think I would have done an MBA,” he says. Also, the program was only one year and attracted a geographically and professionally diverse crowd. “I entered the MBA program with some specific goals: I wanted to find a business partner and find a new business opportunity,” he says.

While at Oxford, Helgesen served as chairman of the entrepreneurship group and introduced an unofficial class on the intersection of lifestyle and entrepreneurship. He estimates that over 10% of his MBA class attended a typical session. He also met his co-founder, classmate Erica Mackey, within the first few days, though they wouldn’t collaborate on Off Grid Electric until the second term. She had extensive experience in East Africa, spoke Swahili fluently, and shared Helgesen’s interest in addressing the continent’s energy issues. They later recruited Off Grid’s CTO, Joshua Piece, who brought extensive renewable energy experience.

Three months into the MBA program, Helgesen had the germ for Off Grid in his head. He fleshed it out during the Entrepreneurship Project, a required course that puts MBAs in teams to formulate a business idea and then build a business plan around it. “It allowed the idea to progress further than it otherwise might have,” Helgesen says.

The team’s watershed movement came when Oxford held a business plan competition with a $250,000 investment as the grand prize. “It was supposed to be for businesses that were a bit further on and had proven what they were going to do, but somehow with a PowerPoint we got through and made an impressive presentation, and we won the award,” Helgesen recalls. Though the team didn’t end up taking the investment, which Helgesen says included restrictive terms and a major stake in the business, it convinced them to move forward.

They were keen to take their ideas out of the classroom and test them in the real world. “Probably the most frustrating part for me as an entrepreneur was that there was no good way to test the model because there wasn’t an African village down the street,” he says.

That changed after Helgesen and Mackey graduated in 2011. Mackey was adamant that the team move to Tanzania. “Erica was very blunt and said the only way we’re doing this is if we’re all picking up stakes and moving Tanzania,” Helgesen recalls. “Josh and I kind of looked at each other, considered it for a minute, and then said, ‘okay.'”

The experience proved pivotal and tough—the MBAs had a lot to learn. “The hardest thing about it was we weren’t solving our own problems. We were solving the problems of people who had very, very different lives than we’ve grown up in,” Helgesen says.

Though the team made missteps in the beginning, they got a few key things right: Rather than building their current pay-as-you-go solar kit from scratch, they started with an off-the-shelf solar system. By proving that there was a market for their product, they sold skeptical venture capitalists on the idea of investing in an alternative energy company in Africa. They’d even fly funders who were on the fence out to Tanzania to see the company’s value and impact firsthand. “[Investors] would visit a customer and see the dramatic improvement in the customer’s life for what was often less than what they were paying before, and that’s just basic business sense … that there ought to be a big opportunity here,” Helgesen says.

Off Grid Electric also set out to bring something new to Tanzania’s business community. “Good customer service is such a rarity, so it’s really remarkable that when you do deliver it, customers are just amazed because they haven’t had that experience,” Helgesen says. Off Grid runs what they believe to be one of the first 24-7 customer-service centers in the country. From his days in e-commerce, Helgesen says good customer service wins out again and again in terms of customer loyalty. He’s confident that’s true in Tanzania, too.

Off Grid Electric launched in November 2011 as a forerunner in the field. Now, solar startups are cropping up all over East Africa. Competitors such as M-KOPA and SunnyMoney have claimed millions of investment dollars and government funding. Smaller solar startups are clamoring for their slice of the pie as well. But Helgesen doesn’t seem particularly concerned. “I always tell my team that for every one startup that died from competition, 10,000 died from suicide, so the most important thing we can do is to focus on executing,” he says.

He sees the competition as a testing ground—where he can watch large-scale market trials take place risk free. Plus, there’s something of a room-for-everyone mentality: He estimates that even with all the new entrants, off-grid households with a basic solar system comprise only 2% of the market share, and many of those systems still can’t power a TV or laptop. “So you still have a ton of room, in my perspective, to deliver people the power they really want, which is not just the bare, bare basics.”

While Helgesen picked up key lessons in the field, he’s quick to acknowledge the value of his MBA and his time at Oxford. However, he doesn’t recommend entrepreneurship for everyone: “For many people, entrepreneurship is the only thing they can do, and they love it and they can’t imagine doing anything else. And for other people, it’s incredibly thankless, and it’s certainly not the best way to make money,” he says.

More from Poets&Quants: The Top Business Schools For MBA Startups

For him, the reward extends beyond revenue numbers and term sheets. “Some of the most thrilling home visits for me were the ones where you walk out in the village at night and everything is dark. And then you just see homes lit up by our product. And it’s not just one, but you see a whole bunch, and that’s incredibly exciting because they’re often the only lights you see.”