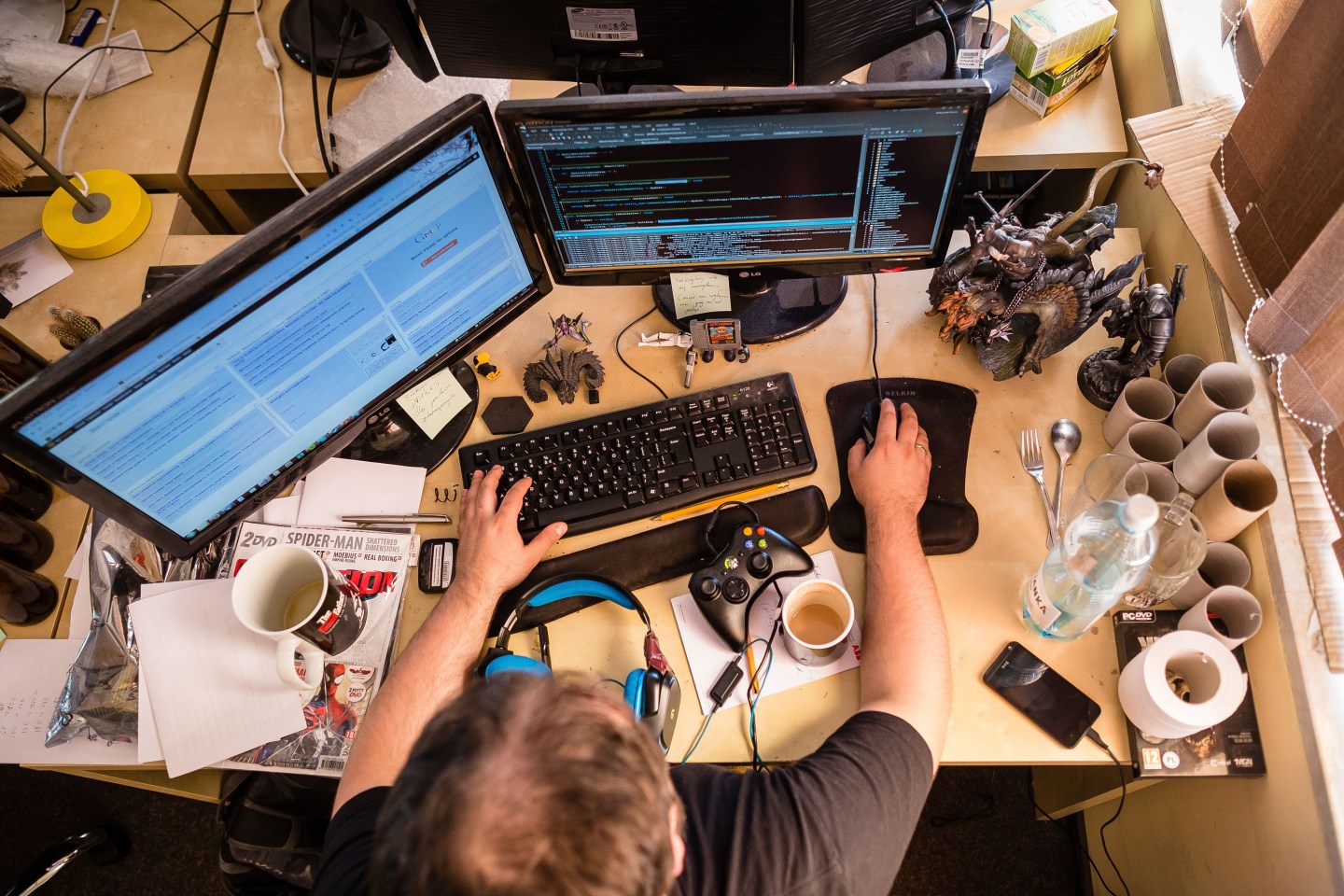 TO GO WITH AFP STORY BY BERNARD OSSER: Workers of "11 bit Studios" Polish IT company producing video games are seen working in office in Warsaw on July 2, 2015. The Warsaw-based "11 bit" studios has the hallmarks of an IT start-up. Around 40 video game developers sit in the open-plan office located in a 1970s building by a noisy expressway in an industrial part of town. AFP PHOTO/WOJTEK RADWANSKI (Photo credit should read WOJTEK RADWANSKI/AFP/Getty Images)
Photograph by Vojtek Radwanski — AFP/Getty Images

Amazon, which has been nosing around the video game world for the past several years, is making its boldest play yet to establish a foothold.

The company has released a new, high-end game engine called Lumberyard that will allow developers to create games for PC, Xbox One, and PlayStation 4. And, in a twist on the industry’s standard practices, Amazon (AMZN) will not charge game makers any sort of royalty or subscription fee.

Instead, the company will monetize the engine through the use of its Amazon Web Services (AWS) cloud computing arm. The engine also integrates Twitch, the game stream service Amazon bought in 2014 for $970 million.

In the coming months, the engine will also support mobile games and virtual reality titles on devices from Oculus.

“When we’ve talked to game developers, they’ve asked for a game engine with the power and capability of leading commercial engines, but that’s significantly less expensive,” said Mike Frazzini, vice president of Amazon Games in a statement.

The company also introduced a separate service for operating and scaling broad multiplayer games, an extremely popular (and profitable) part of most of today’s AAA games.

Amazon has steadily been building a presence in the gaming world for the better part of the past two years. Prior to its surprise purchase of Twitch, it had already begun laying the groundwork for a bigger push in the industry, launching its own in-house game development studio.

At the same time, it acquired Double Helix games, makers of Killer Instinct on the Xbox One and the classic title Earthworm Jim, and recruited top-level talent from around the industry, including Kim Swift, designer of Valve Software’s Portal and Far Cry 2 lead Clint Hocking. (Hocking left the company last August to rejoin Ubisoft.)

While there have been whispers that it planned to use its own Fire TV or Fire Tablet line to challenge consoles and mobile devices, Amazon has increasingly been taking a flanking approach as it establishes a foothold the industry. Twitch, for instance, has become the world’s leading social video platform for gamers, with over 100 million unique visitors per month and an average view time of 106 minutes per person per day.

And by luring game developers with a free, high-end graphics engine, it can drive more traffic to AWS, which will only increase that division’s bottom line.

By offering those features freely up front and charging game makers on the number of active daily users their game has, it could win over independent developers. That’s increasingly important, as titles from those studios have been growing in popularity with players who are looking for a break from the big-budget sequels that tend to dominate the sales charts.