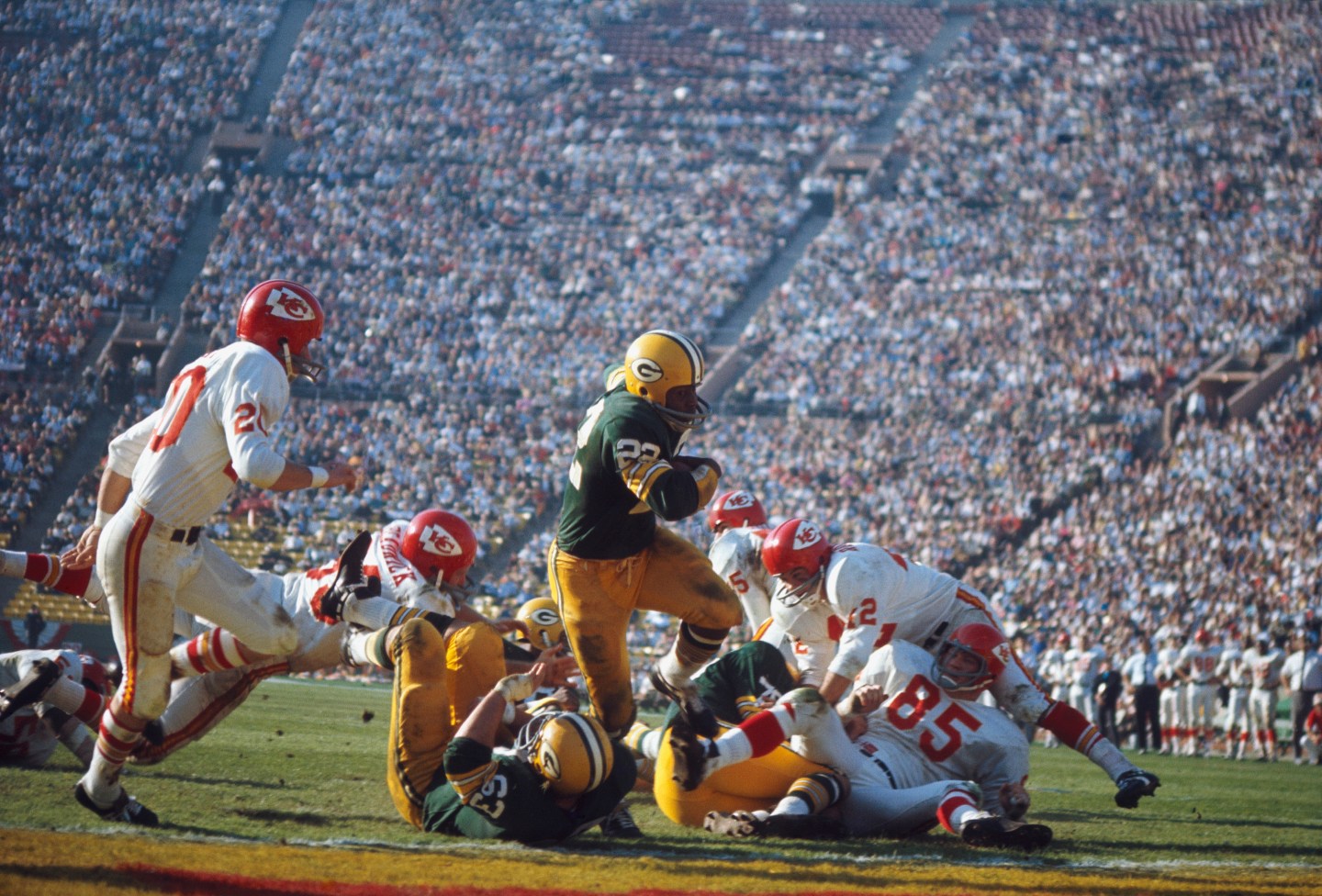 Some call it the lost “holy grail” of sports programming: A beat-up video tape of the Kansas City Chiefs clashing with the Green Bay Packers in the first ever Super Bowl in 1967. NFL legends Vince Lombardi and Frank Gifford are featured throughout the game. Oh, and it includes vintage commercials bragging about the benefits of True cigarettes.

Today, the only recorded copy of that iconic broadcast from 50 years ago belongs to a 47-year-old North Carolina man, Troy Haupt. In an era when very few people had tools to record TV, Haupt’s father captured the first Super Bowl on a device called the Quadruplex taping machine. As the New York Times explains, the tape then sat in an attic for decades until Haupt restored it.

Now, days before Super Bowl 50, the tape is at the center of a copyright controversy over who should control the tape: Haupt or the NFL? The league previously offered $30,000 for the tape after Haupt asked for $1 million, and now the NFL is threatening to sue him if he sells it elsewhere. And in a final intriguing twist, no one may own the rights because the broadcast may now be part of the public domain.

To understand why the NFL, which has a fierce reputation for protecting its intellectual property, does not control the tape, it’s important to understand a few legal issues glossed over in the Times report.

The first is that, even if the league has rights to the footage, it can’t stop Haupt from selling the tape itself. According to copyright lawyer Lloyd Jassin, the right to sell the tape is protected by the so-called “first sale doctrine,” which lets people resell used books and movies.

“The owner of a lawfully made copy of a work has the right to resell that copy without the copyright owner’s permission,” said Jassin.

His assessment squares with that of legal scholar David Post, who likens Haupt’s situation to someone who wanted to sell a used DVD copy of last year’s Super Bowl highlights. Post also says a law professor cited by the Times incorrectly claimed “the law favors the league,” and adds the NFL’s threats against Haupt are just “bluster.”

But just because the NFL can’t stop Haupt from selling the tape doesn’t give him a right to show it to others. While people may sell used Super Bowl DVDs, they’ll certainly hear from NFL’s lawyers if they try to play the DVD in a theater or upload it to a public website.

The reason is that the right to “publicly perform” a work is a separate type of copyright than buying or selling the work. But even here, the NFL is on shaky ground when it comes to Super Bowl I.

Super Bowl I in the Public Domain?

The NFL may claim it has the rights to show the Super Bowl I broadcast, but it still has to prove it owns those rights in the first place. And this is where the quirks of copyright law make things really interesting.

If the league, for instance, wants to file a copyright lawsuit with any teeth, it must first register the work with the U.S. Copyright Office. This process involves filing a “deposit copy” or sample.

The trouble here, of course, is that the NFL doesn’t have a sample since Haupt has the only copy of the broadcast. And nor do NBC or CBS, the networks that originally aired the game. (The NFL did recently broadcast its own version of Super Bowl I based on its own archive footage, possibly in a move to spite Haupt. But this would not count as the same “work” for copyright purposes).

I asked the NFL if the league has registered the Super Bowl I broadcast, or if it had even obtained the broadcast rights from NBC or CBS. It has yet to respond.

And in a final twist, it’s not clear that Haupt is a position to register the broadcast recording either. The reason is due to yet another quirk of copyright law that, until 1976, required owners of works to mark them with the famous (c) symbol when they published it, or else forfeit the work to the public domain.

Today, anyone who has watched a sports game will be familiar with a barrage of reminders that this “telecast is copyrighted,” even though such formalities are no longer required under the law. But in that first Super Bowl, it’s unlikely the broadcasters thought to do that–especially as Congress didn’t extend copyright to live sports broadcasts until 1976.

The upshot is that a famous and long-hidden piece of sports footage may now be part of the public domain. In the same way that long-standing copyright claims to the song Happy Birthday recently fell apart after tested in court, it may turn out the first Super Bowl broadcast belongs to all of us.

For that to happen, though, Haupt would have to share a physical copy of the tape or put it on YouTube. And if he does that, the vaunted defense of the Denver Broncos will look meek compared to army of NFL lawyers that would descend upon him. Enjoy the Super Bowl.