Inside the Secretive World of Hedge Fund Psychiatrists and Performance Coaches 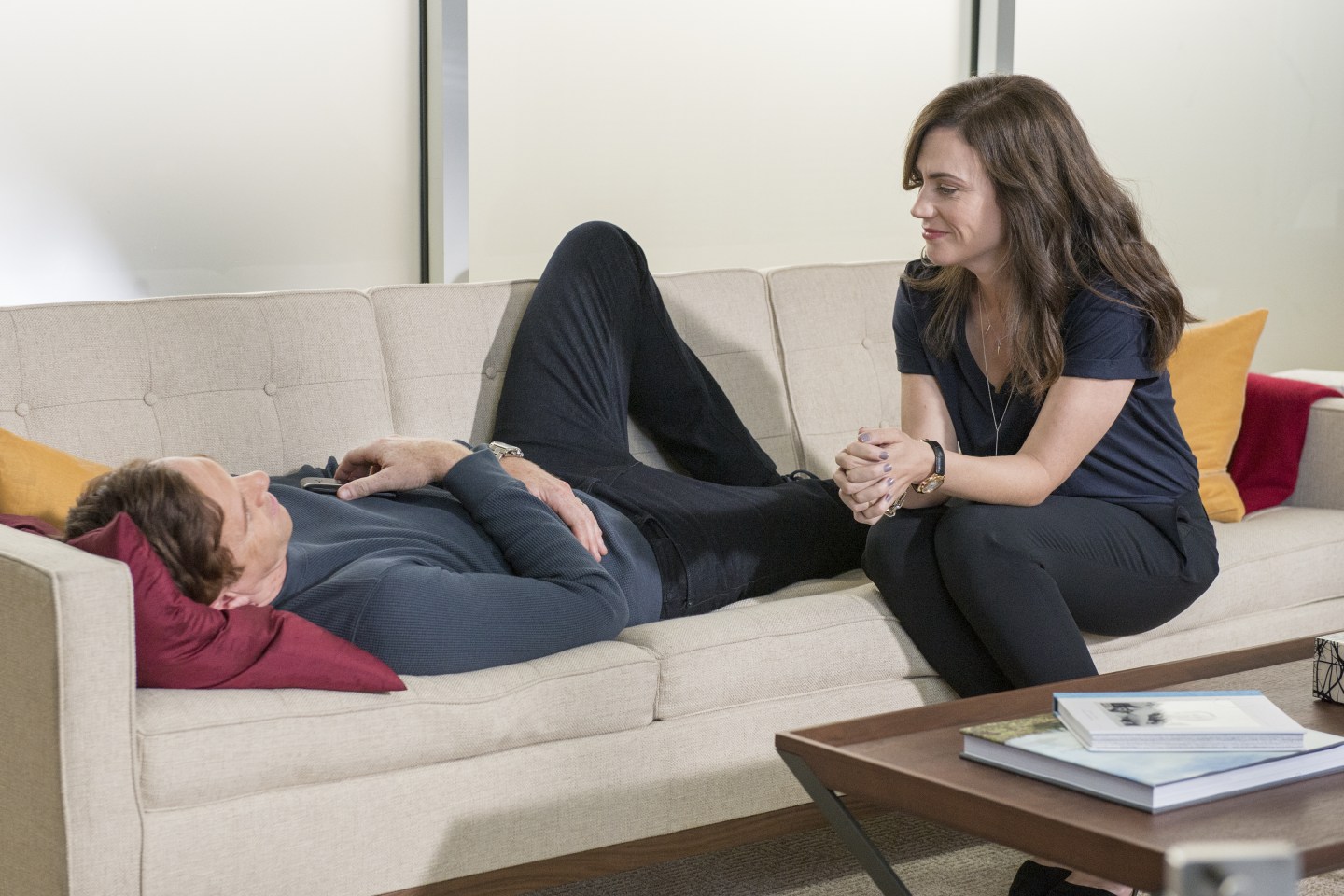 In Showtime’s new drama Billions, traders in a rut at hedge fund Axe Capital have someone to turn to: Wendy Rhodes, played by Maggie Siff, who is the firm’s in-house psychiatrist and performance coach.

In one scene, Rhodes meets with Mick, a trader who’s down 4% while his colleagues are all in the black. “What’d you take down last year?” Rhodes asks him. “7.2 million.” She holds a fist up: “7.2 million. Feel that.” She makes him repeat it again and then a third time, louder, pounding his fist against his chest.

Cass is one of a dozen or so performance coaches on Wall Street, many of whom are armed with doctorates or medical degrees. They work with in-the-dumps financiers who hire them personally and rotate through hedge funds as temporary in-house coaches, meeting with traders one-on-one on their employers’ dime. An even rarer breed of coaches work at some of the largest hedge funds and financial firms on a full-time, in-house basis.

Getting Rhodes’ job isn’t easy, Cass says. He would know—he applied for it.

Billions‘ Axe Capital is widely considered to be modeled after billionaire Steven Cohen’s SAC Capital Advisors, a hedge fund now in run-off mode after becoming embroiled in a years-long insider trading investigation by Manhattan U.S. Attorney Preet Bharara. For more than a decade, SAC Capital employed psychiatrist Ari Kiev, a former performance coach for Olympic athletes who has been called the first performance coach on Wall Street. After Kiev passed away in 2009, performance coaches who had revered him for years applied for the job. “I had to get a referral from the New York Yankees to be on that list,” Cass says. “That’s how competitive it is.” But with SAC Capital transformed into Cohen’s family office Point72 Asset Management, it seems like the only person who’s ever been asked to fill Kiev’s shoes is actress Maggie Siff.

In Billions, Siff pushes anxious traders back into an emotional space where they can successfully and consistently make high-risk decisions in stressful, uncertain conditions. “A lot of the job of a performance coach is to get them to stay on the thin edge of profitability,” says psychiatrist Richard Peterson, who works on a short-term basis for firms where he coaches high-level portfolio managers.

Consistent losses for traders often stem from a behavioral pattern that coaches can identify. “Most trading problems are persistent and happen over and over again,” says coach Rich Friesen, who previously ran an equity trading firm on the floor of the Pacific Exchange. Those in a rut often fall into set patterns, like anxious traders who overtrade even when volatility is low, or revenge traders who make harried decisions after a loss to recover as quickly as possible. Others who feel guilty about their wealth and careers might sabotage themselves when they become too successful.

Each member of this niche coaching club has his or her own mojo-finding method. Licensed psychiatrists and psychologists may integrate traditional therapy into their practices. Others favor giving pep talks and ordering traders to do push-ups to get their blood flowing. Those without clinical training lean on their own experiences as traders or athletes.

Shull, who is not a psychiatrist but earned a master’s degree in neuropsychology, says her sessions with clients focus on identifying the behavior patterns that are bringing them down, then understanding the emotions at the root of those patterns. “It’s easier to behave differently when you understand the feelings behind the behavior,” she says. Shull says she spends less time ego-pumping, and more time helping client’s understand what’s irking them.

For Cass, it’s about training traders in “Bullish Thinking,” his term for the “mindset for analyzing and interpreting ambiguous, complex, stressful, and uncertain events by neutralizing crippling emotional states that may be associated with them,” he writes. Cass has clients fill out “thought logs” designed to give them more conviction in their trades. And, since he’s licensed, he advertises a “two for the price of one” deal of offering mental health services in addition to boosting traders’ performance.

Peterson, meanwhile, assesses his clients holistically by inquiring about their thought processes and physiology during trades, social life, diet, sleep schedule, and even spirituality. One client who had fallen into a rut, he says, had recently become a father and was sleeping alongside his child: two factors that have been shown to cause significant testosterone drops. And the client had given up his beloved steak lunches to please his vegan wife. Identifying those factors and addressing them—bringing back steak and limiting the co-sleeping arrangement—turned the trader around, Peterson says.

Some coaches apply slightly unorthodox methods to help traders. Friesen has his clients try what he calls creating a “trader temple.” He likens it to the way that judges don robes as a reminder of their oaths to be fair and unbiased. “I want to give a new reverence to the role of traders,” he says. So, he asks traders to create boxes around their desks out of tape. “Every time they step over it, they step into the role.”

Many sessions involve discussing personal information that traders might not want their employers, who are paying the coaches, to know. Shull says she insists on full confidentiality so that she can build trust with her clients. And for coaches who are board-certified psychiatrists, divulging the content of their conversations except in the most extreme cases would violate their code of ethics. But in the case of in-house coaches, that firewall becomes more difficult to maintain. “Once you’re in-house, I think it’s almost impossible to have that Chinese wall. Psychologically, I think it’s impossible to differentiate,” Peterson says.

In an industry where machoism and egos often reign, the use of financial performance coaches tends to be hush-hush. Coaches aren’t allow to disclose which firms they work with, and few hedge funds admit to employing them; every firm that Fortune contacted either declined to comment or did not respond. But in the wake of a year that left major hedge funds like Greenlight Capital and Pershing Square Capital Management struggling to explain steep losses to investors, performance coaches’ services are at their most relevant.

When profits are down, Friesen says, financiers “go from being king of the mountain to a trembling mass of jelly”—masses of jelly with plenty of cash to burn to regain their mojo.

Editor’s note: A previous version of this article incorrectly referred to Alden Cass as a psychiatrist. In fact, Cass is a psychologist.