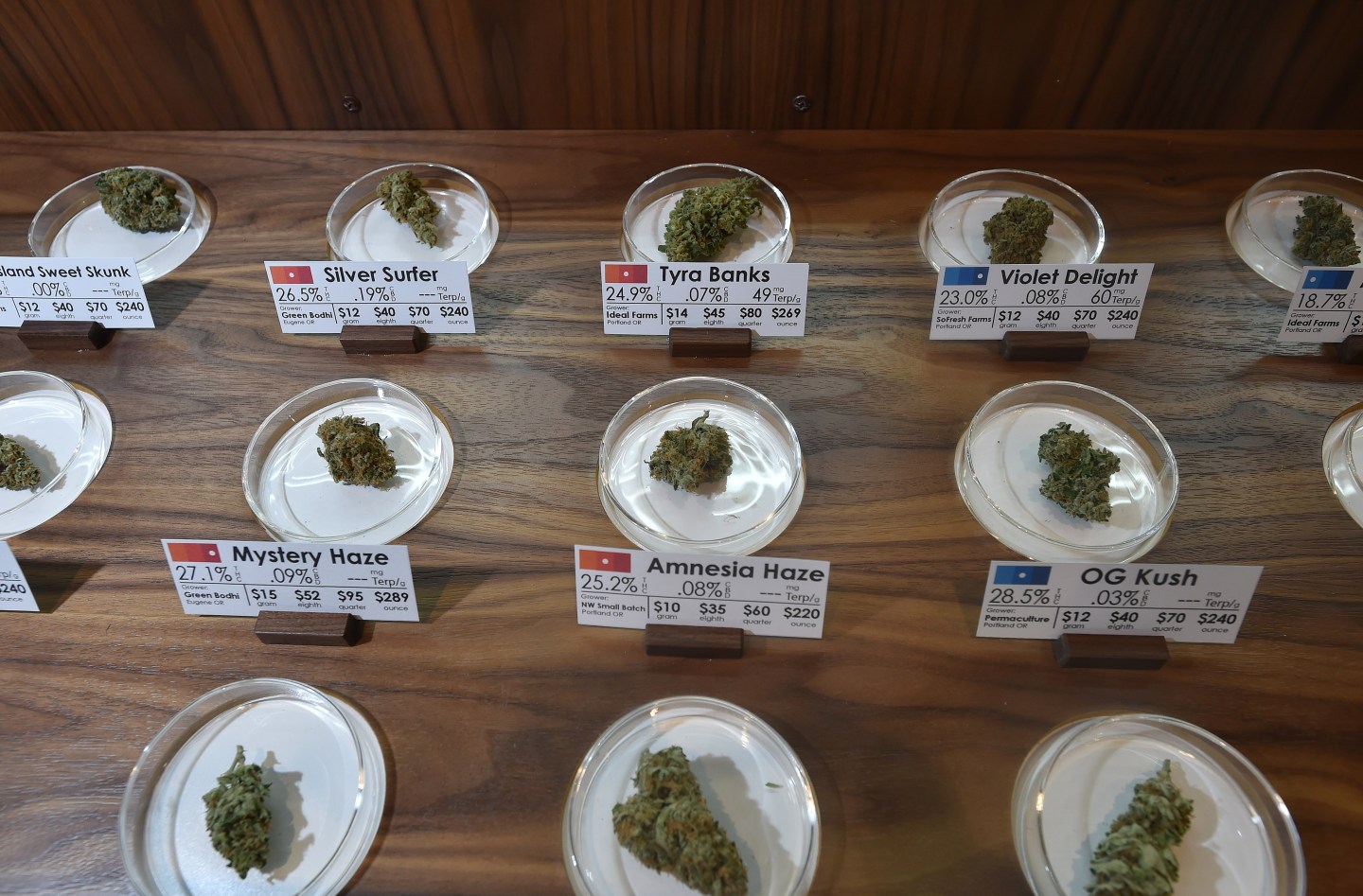 Samples on display at a marijuana dispensary in Portland, Oregon, on October 4, 2015.
Photograph by Josh Edelson—AFP/Getty Images

As voters in more states embrace legalized marijuana sales, the burgeoning cannabis industry has gone from a curiosity to a bona fide booming market.

Just how big is the market for legal pot? A new report by a leading marijuana industry investment and research firm found legal cannabis sales jumped 17%, to $5.4 billion, in 2015 and they will grow by a whopping 25% this year to reach $6.7 billion in total U.S. sales.

The numbers are staggering, considered the first recreational dispensaries opened for business in Colorado only two years ago.

On Monday, ArcView Market Research will release its fourth edition of The State of Legal Marijuana Markets report, and it includes the prediction that the legal cannabis market will see a whopping $21.8 billion in total annual sales by 2020. (By comparison, at that point, the legal marijuana market could be bigger than the National Football League, which saw roughly $12 billion of revenue last year but is aiming to reach $25 billion by 2027.)

ArcView expects the legal pot market to show a compound annual growth rate of nearly 30% over the next few years. “I think that we are going to see in 2016 this next wave of investors, the next wave of business operators, and people who’ve sort of been watching or dipping their toe in, really starting to swing for the fences and take it really seriously,” ArcView CEO Troy Dayton said in an interview.

The first crop of home grown pot is coming to harvest inside an apartment in Washington, D.C., August 8, 2015. About one pound of two marijuana plants are harvested. The female plants, which were grown in large flower tents with LED and daylight lights, need around 60 days before they are ready.Photograph by Astrid Riecken — Getty Images

ArcView Market Research, part of cannabis industry investor network ArcView Group, provides some of the most regularly-cited figures and estimates on the market for legal marijuana. In November, ArcView announced a new partnership with cannabis industry data analytics firm New Frontier to co-publish and co-produce its annual report. And this partnership yielded “by far the most comprehensive report,” Dayton said. Rather than just focusing on medical and recreational dispensaries’ sales, the report tracks a wide variety of legal marijuana sales, including cannabis products sold through delivery services and medical marijuana “caregivers,” who can legally grow and distribute the drug.

ArcView’s latest projections are cause for even greater optimism for the cannabis industry than in previous reports, which previously estimated $2.7 billion total industry sales for 2014 (ArcView now estimates $4.6 billion in sales that year) while predicting that the market would grow to $10.8 billion by 2018.

Why the market is growing

While the drug remains absolutely illegal on the federal level, the tide of public opinion has been moving in favor of legal marijuana for years, according to national polls. A handful of states could become the latest to allow the sale of recreational pot following expected votes in November. Four states already have legalized recreational marijuana, and a total of 23 states have legalized medical marijuana.

Well-established medical pot markets in states like California still account for much of the country’s legal marijuana sales, but recreational marijuana sales is expected to help fuel the cannabis market’s soaring growth over the next few years, says ArcView. It projects that adult-use pot sales will account for more than half (53%) of the overall market by 2020. That would represent growth of more than 1,150% for recreational sales over the next four years.

The huge jump in adult-use sales last year coincides with the first full year of recreational marijuana sales in Washington, which launched its legal recreational market in July 2014, as well as the beginning of legal sales in Oregon last fall. Meanwhile, 2015 recreational sales in Colorado had already increased by almost 68% year-over-year after only 11 months.

The growth in edibles, which are higher priced, have helped fuel sales, says New Frontier Director of Analytics John Kagia, who authored this year’s State of Legal Marijuana Markets report. “They also come at higher price points than the flower does, which means the businesses are able to capture higher sales per customer through the sales of these new products.”

The biggest driver of growth in coming years is sure to be new laws being passed by states, according to Dayton. About a half a dozen states could put a legal pot to a vote this fall. California’s medical sales already account for a large chunk of the total industry; if it legalizes recreational marijuana this Novembers, as many expect, that alone could lead to a huge boom in industry sales.

Meanwhile, expect the cannabis industry to continue to gain legitimacy among entrepreneurs and investors. “A lot of people in the business and finance world, in particular, have kind of taken a ‘wait and see’ approach to the cannabis industry,” Dayton said. That will change in 2016, he predicts. Continued revenue growth attracts more investors (and convinces them to dig deeper for investments). The industry has already begun to see signs of that, such as last year’s news that cannabis-focused Privateer Holdings had secured a $75 million investment from Founders Fund, the firm founded by billionaire Peter Thiel.