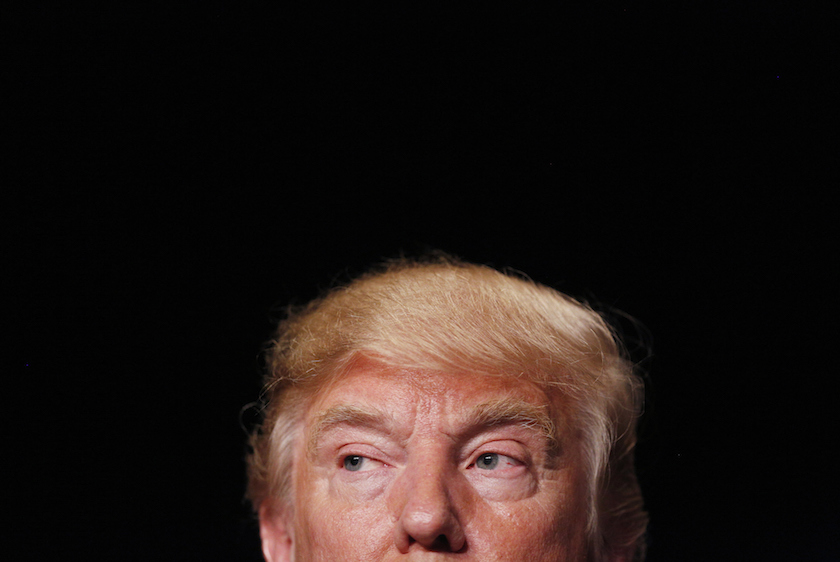 Donald Trump, president and chief executive of Trump Organization Inc. and 2016 Republican presidential candidate, attends a campaign event at the Orpheum Theater in Sioux City, Iowa, U.S., on Sunday, Jan. 31, 2016. Donald Trump has overtaken Ted Cruz in the final days before Iowa's caucuses, with the fate of the race closely tied to the size of Monday evening's turnout, especially among evangelical voters and those attending for the first time. Photographer: Luke Sharrett/Bloomberg *** Local Caption *** Donald Trump
Photograph by Luke Sharrett — Bloomberg via Getty Images

The millions of Twitter users following Donald Trump shouldn’t expect a “follow back” from the Republican presidential front-runner anytime soon.

Trump’s campaign account @realDonaldTrump has nearly 6 million Twitter followers, the most of any candidate running for president. But he is picky about who he follows, with just 50 accounts listed as of Monday. That means he has the highest ratio of followers to those he is following, in both the Republican and Democratic fields.

In contrast, Ted Cruz, the U.S. senator from Texas who has emerged as Trump’s strongest rival, follows nearly 14,000 accounts on Twitter and has 755,000 followers, according to his profile as of Friday.

The exclusivity underscores how Trump primarily uses Twitter to broadcast his message as opposed to engaging in a back and forth with users, experts in digital strategy said. While other campaigns use a similar approach, Trump commands the most attention on social media.

It is time to take back our country- and MAKE AMERICA GREAT AGAIN!#CaucusForTrump Video: https://t.co/y9Fa8Ut6IP pic.twitter.com/bJ6a0t9Pv2

Trump’s pickiness may indicate a surprising strategy for the freewheeling Republican front-runner: Playing it safe when it comes to pledging his Twitter allegiance with a “follow.”

Candidates can’t pick and choose their followers, but they have control over when to click the follow button.

“There is more risk in who you follow,” said Scott Talan, a communications professor at American University who teaches social media strategy. “If you’re actively following someone, you’re assuming it’s not going to be some religious extremist … or a prisoner with a record.”

And, while some Republican candidates follow each other, Trump follows none of them.

The accounts Trump monitors include those of his children and several hotel properties. Also on the eclectic list are musician Steven Tyler, basketball great Magic Johnson, Vince McMahon, chairman and CEO of WWE Inc, and sisters Lynette “Diamond” Hardaway and Rochelle “Silk” Richardson, former Democrats who now stump for Trump and tweet under the handle @DiamondandSilk.

Despite Trump’s highly public battle with Fox News over anchor Megyn Kelly’s role as a moderator in last week’s Republican debate, Fox shows or news personalities such as Sean Hannity account for better than 10% of the handles he follows. Kelly, not surprisingly, did not make the list, but the Fox handles still add up to a larger bloc than any outside of Trump’s family or business.

Hannity and other Fox presenters are also widely followed by Trump’s rivals for the GOP presidential nomination.

Trump’s cautious approach to who he follows hasn’t put a damper on his social activity. His account shows more than 30,000 tweets, the highest of any account reviewed by Reuters.

It also hasn’t stopped Trump from committing blunders with his retweets, like the one from an account called @WhiteGenocideTM, which gave its location as “z” and featured an image that referenced George Lincoln Rockwell, a prominent figure in the neo-Nazi movement in the U.S.

Hope Hicks, a spokeswoman for the Trump campaign, said that Trump operates his own Twitter account. “Everything you see on there is pretty much directly from him,” she said. “The strategy behind it is to tell the truth and to call it like he sees it.”

On Twitter, Trump goes where his opponents fear to tread. He uses it to launch unfiltered personal attacks on those who cross paths with him. For example, he did not shy from retweeting a post that included photographs of a skimpily dressed Kelly from a magazine shoot and the comment, “And this is the bimbo that’s asking presidential questions?”

“He is definitely a loose cannon in terms of how he uses his Twitter account,” said Micah Sifry, co-founder of Personal Democracy Media, an online forum on technology and politics. “At the same time, he hasn’t been hurt by it yet because apparently a big chunk of what he’s saying is popular among Republican voters.”

Trump is aware of his social media success. Following the seventh Republican presidential debate on Thursday, he tweeted Twitter data showing that he commanded the most traffic during the event. “Great Twitter poll-and I wasn’t even there,” he said.

Great Twitter poll- and I wasn't even there. Thank you! #GOPDebate pic.twitter.com/yLJGkoOeBg

Twitter matters to campaigns—it is an increasingly important way for candidates to reach their most ardent supporters.

But talking about the issues on Twitter may not always be the most effective means of engaging supporters. A recent Trump tweet wishing retired golfer Jack Nicklaus happy birthday received more than four thousand “likes,” roughly twice as many as Clinton’s policy-related tweets on the same day.