Cruz Limps Toward the Finish Line in Iowa 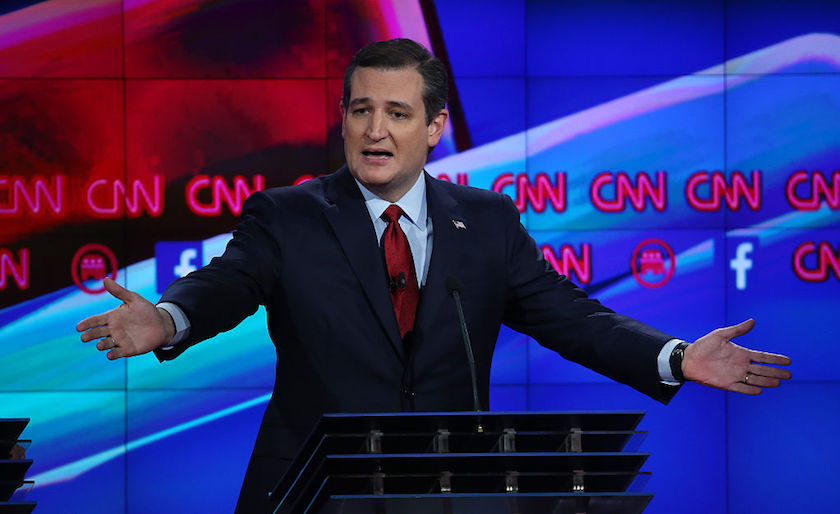 Ted Cruz helps his daughter with her math homework. He makes time for tea with his elderly mother. He remembers birthdays, brings his wife flowers, packs her suitcase even when he’s tired.

Humanizing the candidate is supposed to be a campaign’s building block, not its closing argument. But with just days until voting begins in the presidential race, Cruz is suddenly under siege. So the Texas Senator trotted out a special surrogate Friday to squash the storylines that may be blunting his momentum.

“Ted is likable,” Heidi Cruz, the candidate’s wife of 14 years, assured a modest crowd in Ringsted, a snow-encrusted hamlet in rural northwest Iowa. “This is a person who is incredibly fantastic and fun to be around.”

These are traits you’re supposed to show, not tell. On the other hand, Cruz’s rivals have spent millions driving a different narrative, one meant to deny him a critical victory in the first-in-the-nation caucuses on Feb. 1. “Nobody likes him,” GOP frontunner Donald Trump sneers. Former Iowa caucus champs Mike Huckabee and Rick Santorum are running ads questioning Cruz’s social conservative bona fides. Rand Paul is casting him as a calculating operator masquerading as a conservative purist.

“This is the lie that Ted’s campaign is built on,” Florida Sen. Marco Rubio said at Thursday night’s debate in Des Moines. “Throughout this campaign, you’ve been willing to say and do anything in order to get votes.”

Without Trump onstage Thursday night, Cruz had his worst debate of the cycle. On Friday, he awoke to a blistering headline on the state’s largest newspaper—Rough Night for Cruz, blared the Des Moines Register—and fresh provocations from Trump, who has taken to calling “Canadian Ted” an “anchor baby.” The lead Cruz enjoyed in the polls in December and January has evaporated. With just three days until the first votes in the presidential campaign are cast, a campaign that observers once saw as the prohibitive Iowa favorite is suddenly limping toward the finish line.

Out on the trail, the mojo is gone. Cruz spent much of Friday dropping in on remote villages in rural northwest Iowa, home to few caucus-goers and even fewer undecided voters. He began the day in Ringsted, a hamlet of 409 near the Minnesota border, where he had to fend off questions about his controversial ethanol position in a bar with cinder-block walls and Chivas Regal on tap.

At his next stop in Fenton, pop. 279, a van plastered with “Ted Cruz Can’t Be Trusted” parked outside his retail stop in a local restaurant. Cruz campaigns gamely, offering selfies for grandparents and fist-bumps for gradeschoolers. While supportive, his crowds were modest and restrained, more befitting a summer flirtation than a surging favorite.

For weeks Cruz’s allies have framed the GOP nominating contest as a two-man race between he and Trump. “If Ted Cruz doesn’t win the Iowa caucuses, it’s a done deal,” said Texas Rep. Louie Gohmert, suggesting Trump could run the table. But much of the party—including his rivals—seems to prefer Trump atop the ticket over the Texas. Even worse, Rubio could be making it a three-way party.

Sensing the Florida senator’s momentum, Cruz has shifted his advertising attacks from Trump to Rubio, according to the New York Times. In an escalation that betrays nerves, the campaign’s latest ad dubs Rubio “the Republican Obama.” Meanwhile, Cruz nixed all mentions of Trump from his stump speech on Friday, even as the blustering tycoon ramped up his attacks. “I like Donald,” Cruz told reporters in Fenton, a scarf knotted at his neck to ward off the chill. “He’s welcome to say whatever he likes.”

Aides believe that Cruz has built a campaign that can weather the onslaught. “If you’re going to win, you have to be able to take a punch,” said campaign manager Jeff Roe. By all accounts, Cruz has the most sophisticated field operation in the state, with some 12,000 volunteers, more than 1,500 precinct captains and a data operation that drives voter targeting and offers a rich picture of the shifting political landscape here.

Barring a massive influx of first-time caucus goers, Cruz aides say they remain well-positioned to pull off a victory that would solidify Cruz’s spot in the nominating contest’s top tier. A record 122,000 Republicans showed up for the 2012 caucuses. Cruz allies say he can prevail even if that mark is shattered. Iowa Rep. Steve King, a well-wired conservative who supports Cruz, projects about 135,000. Veteran Iowa hands see few signs of a real Trump turnout machine. Still, “Trump has confounded the political logic before,” King said. “He could do it again.”

Cruz fans worry the late drama could be a sign that he is fading. “I’m concerned,” says Nancy Brenner, a homemaker from Wallingford, Iowa. “We’ve gotten a lot of negative ads against him in the mail.” Trump’s slashing attacks on Cruz have taken a toll. Cruz remains the most popular figure in the field for conservative primary voters, despite (or more likely because of) his Washington solo act.

But his numbers have sank 16 points since mid-January, according to Gallup—a stretch that began with Trump’s broadsides against his citizenship and temperament. The campaign, which had long been content to coast in Trump’s wake, was slow to shift tactics and punch back. “It would have been nice,” King said, “if the Cruz super PACs had the right stuff in the can ready to go.”

Then there’s the question of the candidate’s schedule. In mid-January, Cruz opted to spend a precious week in New Hampshire, hoping to lay the groundwork for another strong showing. But allies wonder if Iowa felt neglected. Meanwhile, his pledge to visit each of the Hawkeye State’s 99 counties has produced a curious itinerary for the closing push, with relatively little time in the state’s largest cities or its very conservative western section.

As the pressure builds, Cruz is betraying few signs of strain. Speaking with reporters in the back of a restaurant in Fenton, he sought to contrast his rivals’ jabs with a “hopeful, optimistic” message of spiritual awakening. He is back to basics, rattling off the same stump speech he has leaned on for much of the race. And instead of hitting back, Cruz is banking on his better half.

Campaign aides have long touted Heidi Cruz—who met her husband on George W. Bush’s presidential campaign and is currently on leave from her job as an executive at Goldman Sachs—as a rainmaker with a golden touch.

But in the closing hours of this critical first-in-the-nation contest, the campaign is counting on her to make Cruz seem just a bit more cuddly. She regaled a crowd with stories about their policy discussions over dinners, his consistent conservatism and his habit of singing to her between campaign stops. “Ted is the most genuine, down-to-earth, thoughtful person I know,” Mrs. Cruz said. “You cannot rattle this guy.”

But in the final hours of a race that could be slipping away, her normally unflappable husband may finally be getting a little bit rattled.