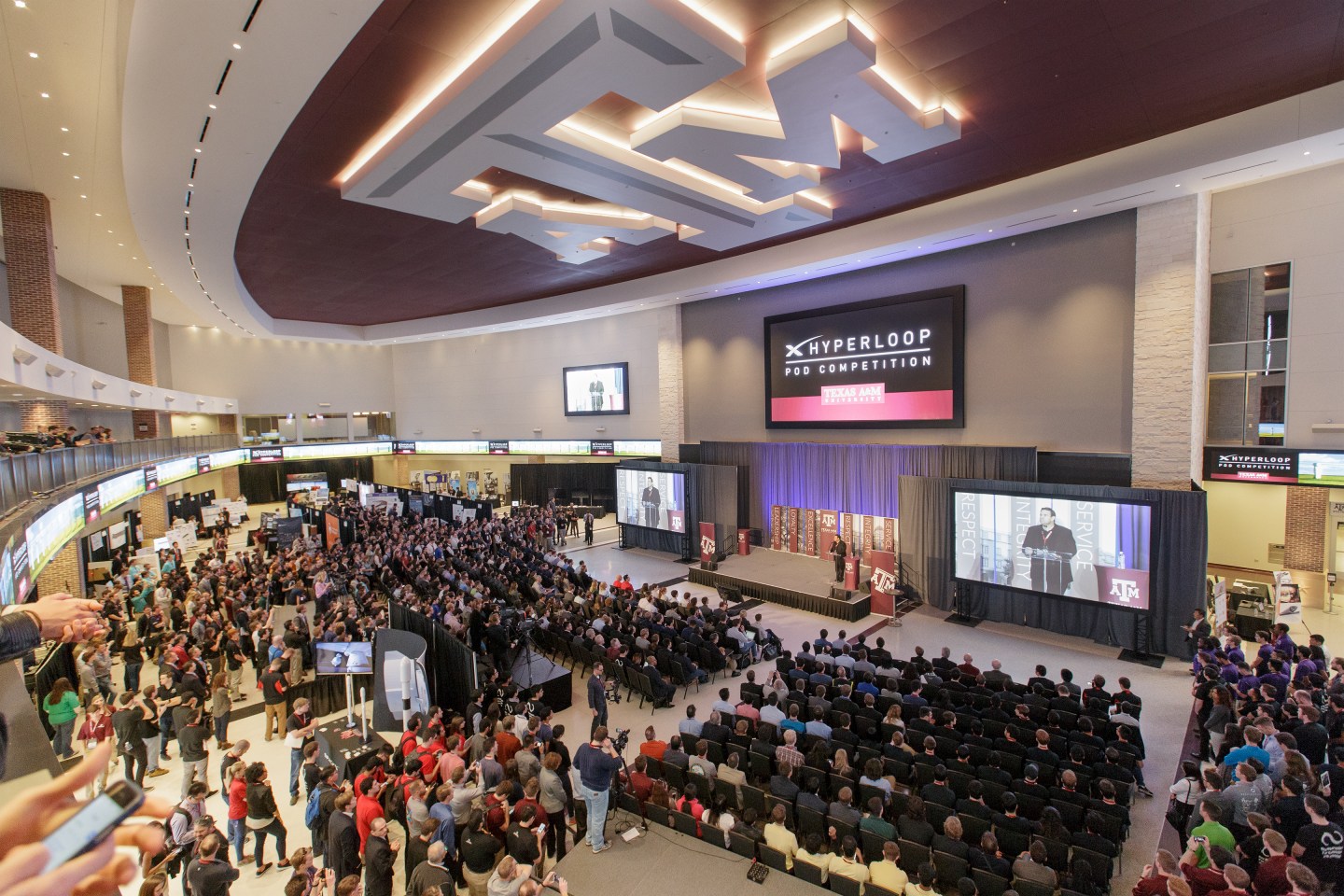 “Let the breaking of the pods begin!”

That was the invocation Friday afternoon by SpaceX’s Dr. Steve Davis as he kicked off the Hyperloop Pod Competition Design Weekend, which has attracted more than 120 teams from 20 countries to Texas A&M University in College Station, Tex. Those teams have spent much of the past year creating designs for the levitating pods that may someday carry passengers at up to 700 miles per hour through a low-pressure tube between San Francisco and Los Angeles.

Davis and fellow judges will winnow the teams to somewhere between fifteen and twenty-four finalists between now and Saturday night. Those finalists will then be invited to Hawthorne, Calif. in June to try out models of their designs on a half-scale test track.

The Hyperloop, first discussed by SpaceX and Tesla Motors CEO Elon Musk in 2013, is still a highly speculative project. But Musk’s idea for a “fifth form of transportation” (neither car, boat, train, and plane) has clearly captured the imagination of young engineers worldwide.

Most of the teams came from universities, with perhaps the largest the University of Texas at Austin’s 102 member squad. But there’s also a Reddit-organized team known as rloop, and a high school team from Hoffman Estates, Ill.

MIT’s team brought elaborate 3-D printed models and a 70 page presentation, while at least one other team got its ideas across in very endearing colored-pencil sketches. Some teams have designed entire pods, others are focused on subsystems like braking and wheels.

The international teams included contingents from Japan’s Keio University and Pakistan’s Lahore University of Management Sciences. Ali Mannan Tirmizi, a spokesman for the LUMS team, said they had made it to College Station after a 30 hour flight from Lahore. Their proposed pod design involves propelling a magnetically-levitated vehicle using compressed air, its green, dome-like shell evoking a (very fast) turtle.

Aside from winning, all of the teams hope to generate interest from partners and sponsors who can help them fund the building of their designs. Both MIT and UT’s teams have a half-dozen members devoted to business development. Some private companies are also here in courtship mode including magnetic levitation specialist Arx Pax, which has an elaborate booth at the exhibit and is encouraging teams to use its technology on their pods.

The event is housed in a midsized conference hall within A&M’s cathedral-like football stadium, where team members spent time trading insights with others and talking about shared problems and solutions (“Aren’t you guys experiencing choke flow?”). That collaboration may yield unexpected solutions to the many large and small problems involving the Hyperloop and its eventual reality.

To learn more about the Hyperloop, watch our video.

SpaceX has said it’s organizing and funding the Hyperloop competition to encourage students to dream big. It has no intention of ever building a full-scale Hyperloop itself, and says teams retain full control of their ideas.

But at least one more concrete benefit was front and center today: Tesla Motors and SpaceX did brisk businesses at their recruiting tables with the hall full of some of the most ambitious and forward-thinking young engineers in the world.

Today will wrap up with a keynote address from Transportation Secretary Anthony Foxx. John Ratzenberger, a.k.a. Cliff Claven from Cheers, has already dropped by. But the real Hyperloop star, Musk, is not on the schedule. But a lot of the competitors are hopeful.