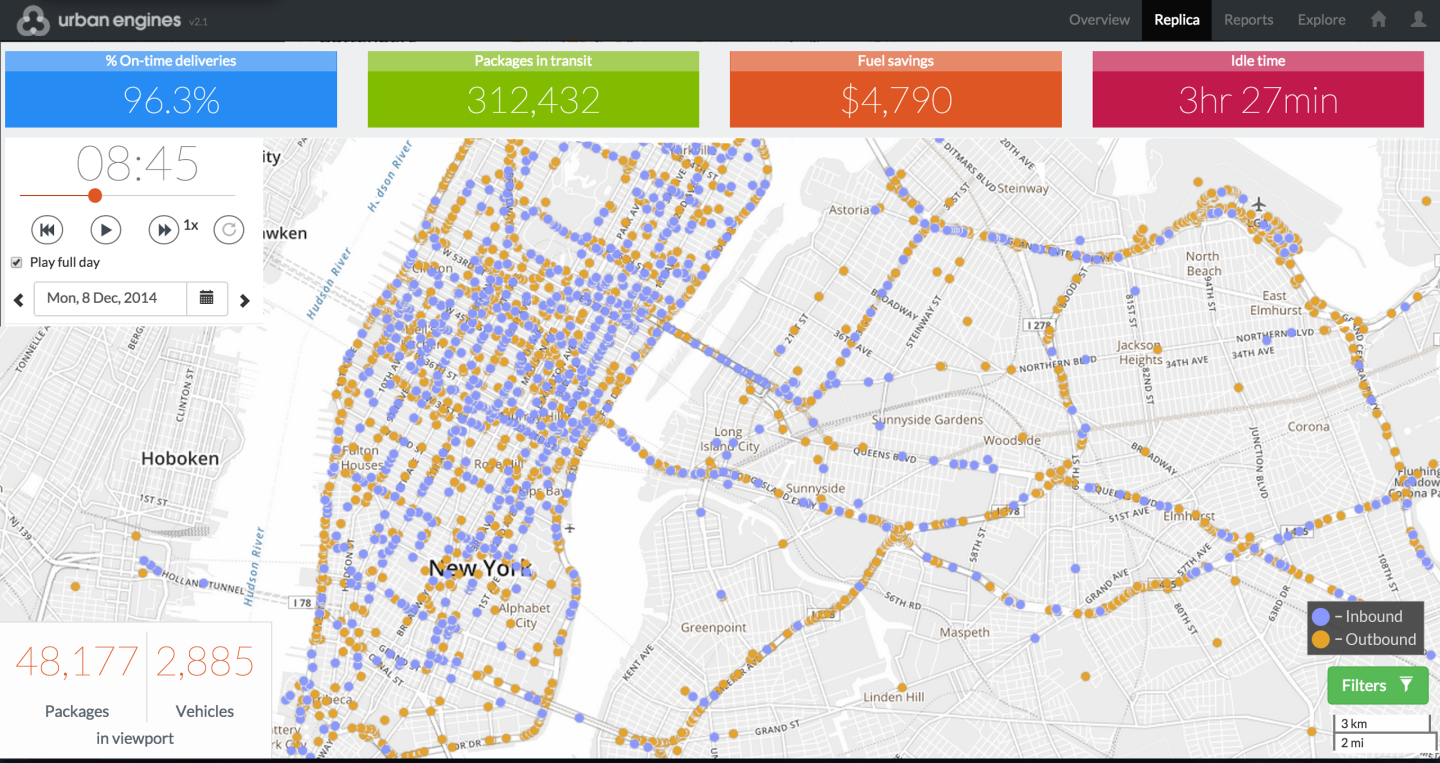 Shivakumar spent nearly 10 years as an engineer at Google(GOOGL), playing a major role in products like AdSense and Sitemaps. In 2010, he decided to transition to working in the real world: “The idea was, how do we take what we’re learning from the web, and use our experiences to make movement faster and better and more personalized?”

He describes Urban Engines as something like an A/B testing tool for cars, trains, roads, and buses—mirroring web and mobile companies’ tactic of rolling out multiple versions of a product or site to see which works best.

“That, in the real world, is just way more expensive,” says Shivakumar. “You can’t change a road network that easily.”

So instead, Urban Engines runs highly detailed emulations of multiple transportation scenarios—anything from a serious blizzard to a major football game to a 10% growth in occupancy in two specific buildings.

Similar technology is common in transportation research institutes, where specialist academics use it to project the impacts of large projects like new train lines, or to optimize large delivery networks like Walmart’s(WMT). Urban Engines claims that its emulator is more detailed than those solutions.

But perhaps more important is that it promises to make mathematical transport planning more accessible. The system has an intuitive interface and allows collaboration across the cloud, which helps non-experts in large organizations collaborate on planning everything from delivery routes to new highways.

The system was also, in a demonstration given to Fortune, remarkably fast. Even small transportation problems involve many variables and large amounts of data, but Urban Engines was able to emulate changing conditions in almost real time. Shivakumar attributes that to the company’s proprietary mathematics.

Urban Engines is part of a broader push to use data science and cloud computing to track and manage transportation networks. With traffic congestion in the U.S. expected to increase by more than 10% by 2020, smart transportation tools like Urban Engines’ are poised to answer a broad demand for transportation efficiency. The company says that in addition to its new partners in auto and mobile, it is already working with cities including Singapore, Casablanca, and Manchester, England, and recently signed a deal with Bay Area Rapid Transit in San Francisco.