How Marco Rubio Uses His Money Woes ‘Like a Shield’ 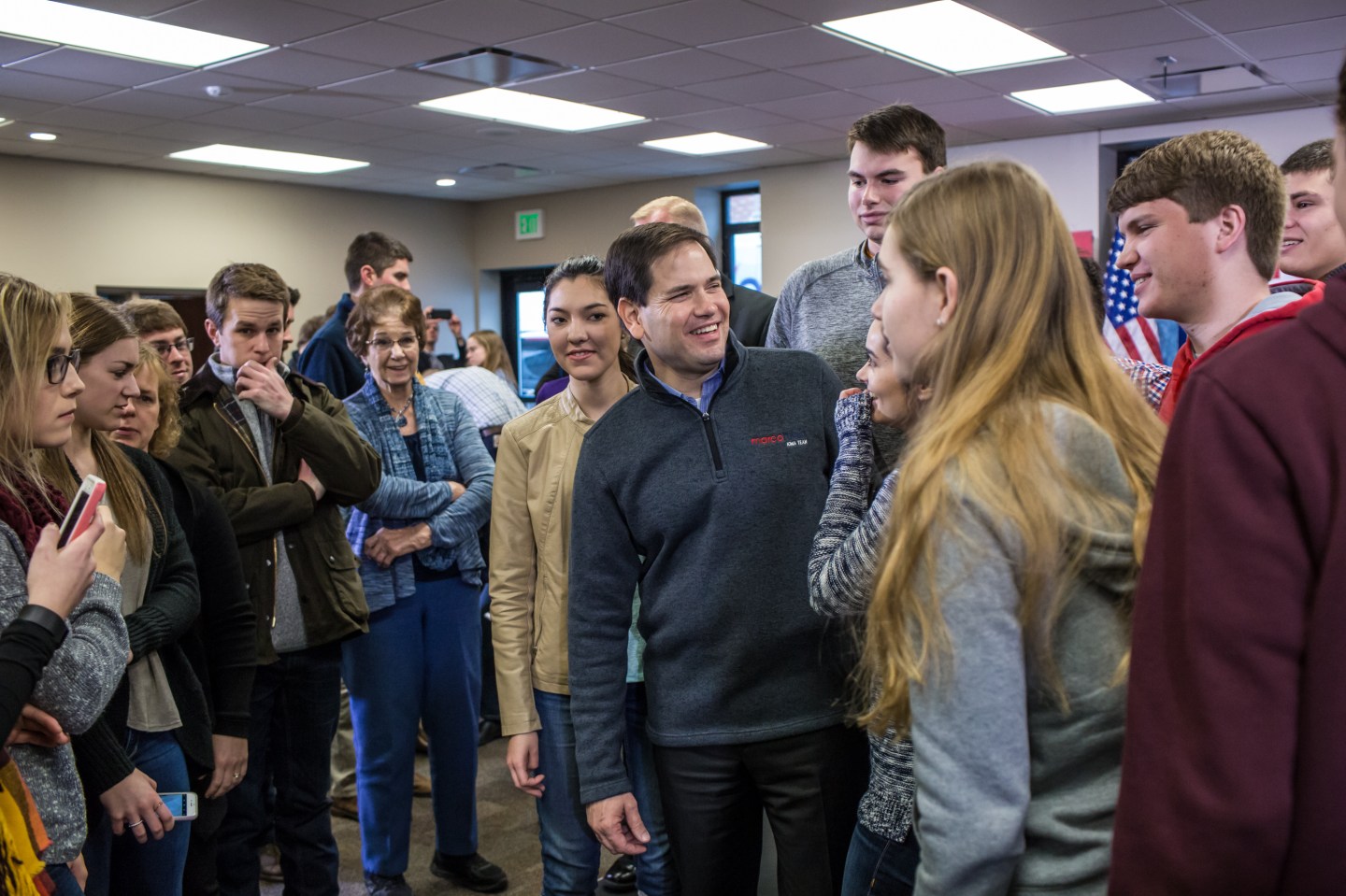 People who go into politics have to arrange their affairs so that they can pursue power while maintaining the type of lifestyle that well-educated executives and their children have come to expect. In this presidential campaign season, as we’ve charted in this series, the dozen-odd serious candidates have employed a variety of strategies. There’s the “Wives of Wall Street” model, used by New Jersey Governor Chris Christie and Texas Senator Ted Cruz. Billionaire developer Donald Trump and former Hewlett-Packard CEO Carly Fiorina are pursuing the “Megabucks CEO” model.

But not every presidential candidate is born rich, married rich, or became rich by working their way through corporate America. Marco Rubio is the least affluent of the GOP contenders, with a spotty financial record to boot. Indeed, Marco Rubio is presenting himself to the public as the Relatable Gen-X Struggler. As such, Rubio is the opposite of the rest of the field – he’s young (44), whereas the rest are generally in their 50s and 60s; he’s Hispanic, whereas the rest of the candidates (save Ted Cruz) are Anglo; and he’s a upper middle-class striver, whereas the rest are generally multimillionaires. He pursued public service from a very young age, without the ballast of a family fortune.

And doing so while pursuing a life in politics – and raising four children – can be tough financial sledding. Especially when the housing market goes bust.

Career trajectory: Earned bachelor’s degree from University of Florida (1993) and law degree from University of Miami (1996), and went directly into politics. After serving on West Miami City Commission, Rubio was elected to the Florida House of Representatives in 2000, and quickly rose to speaker. (The Florida House now pays less than $30,000 per year.) While serving in Tallahassee, he worked as a lawyer, earning as much as $300,000 annually. In 2008, Rubio stepped down from the House, and continued practicing law. In 2010, he was elected to the U.S. Senate. He has also supplemented salaries with book deals, most notably an $800,000 advance for his 2013 memoir, American Son.

The struggles: Most people living the financial lives of their 20s and 30s in public wouldn’t come out looking very good. And neither does Rubio. As a young father of four children, all in private school, Rubio labored under several burdens. He owed $150,000 in student debt and says he didn’t finish paying them off until 2011. He had to maintain two homes (one in his Miami district and a second in the state capital of Tallahassee he co-owned) at a time when the Florida housing market was collapsing. (For a period, Rubio had difficulty making payments on the mortgage in Tallahassee.) And supplementing his own income with outside gigs has become more difficult since he was elected to the U.S. Senate in 2010.

Choices that would make Suze Orman frown: Like many people in his situation, Rubio has had difficult turning income into savings and wealth. But he has also made some choices that are less than optimal. As the New York Times reported, when he got an $800,000 book deal, he bought an $80,000 speed boat. And in 2014, the Washington Post reported, he committed a big personal finance no-no: cashing out $68,241 of retirement funds.

How he monetizes the struggles politically: Rubio has managed to make an asset of his liabilities. Running in a party easily (often, correctly) caricatured as a friend of the rich, Rubio wears his personal financial struggles as something of a shield. The son of a bartender can identify with the struggles of the working class because he’s lived them. As he put it: “If I’m our nominee, how is Hillary Clinton going to lecture me about living paycheck to paycheck? I was raised paycheck to paycheck.”

His personal financial foibles help humanize this smooth talker. Why did he cash out his retirement plan? “My refrigerator broke down,” he said. “That was $3,000. I had to replace the air-conditioning unit in our home. My kids all go to school, and they are getting closer to college, and school’s getting more expensive.” The fact that he had lots of student loans gives him moral authority to speak about the need to reform such program.“To me college affordability is an issue that is very personal,” he has said. “Because the only reason why I was able to go to college–the only reason–was because of federal grants and loans.”

Wild card: Rubio’s struggles provide an opening for opposition research who suggest Rubio may be particularly beholden to individual supporters. His wife, Jeannette, worked for a charitable foundation operated by one of Rubio’s major political backers, Norman Braman. In 2013, a year in which the foundation gave away all of $250, she earned $54,000 in salary. Braman also essentially paid for Rubio’s salary when he taught part-time at Florida International University after leaving the Florida House in 2008.