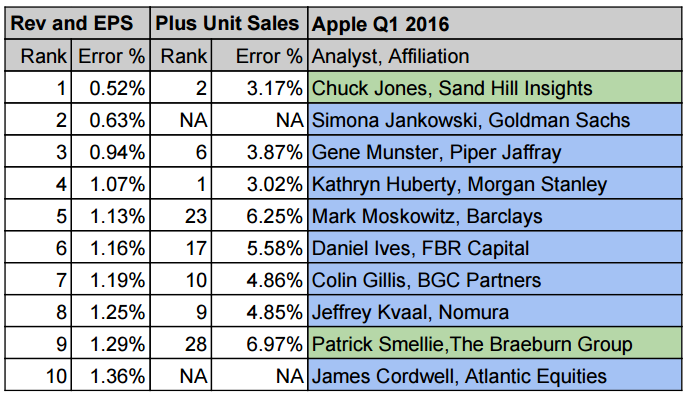 Some pretty dismal estimates were submitted this quarter by extremists on both the bullish and the bearish wings of the Apple party. In general the professional analysts who took seriously the warning signs from Apple’s supply chain did best.

See below for the full ranking of all 41 analysts in Fortune’s panel—28 pros and 13 independents. Meanwhile…

A tip of the hat to:

Chuck Jones, the indy who bested Wall Street’s finest, missing Apple’s bottom line by two pennies and its top line by less than half a percentage point. His talents are wasted at Forbes, where he is a contributor.

Katy Huberty of Morgan Stanley, who came in first in the all-categories competition on the strength of her unit sales estimates.

Simona Jankowski, a newcomer from Goldman Sachs, who nailed Apple’s EPS to the penny on her first time out. (She’s NA in the other ranking because she didn’t submit Mac or iPad numbers.)

And a wag of the finger to:

Chris Cano, who landed in last place by erring on the other extreme. Unlike Popescu, an outsider even among the independents, Cano is well-connected. He follows Apple (APPL) for Susquehanna, a privately held global investment firm that makes a market in the stock.

Below: The full list of analysts, sorted by the top and bottom line, with the pros in blue and the amateurs in green.

Thanks once again to Posts at Eventide’s Robert Paul Leitao for pulling together the Braeburn Group numbers.