AIG CEO: Carl Icahn’s Breakup Plan is Based on a False Premise 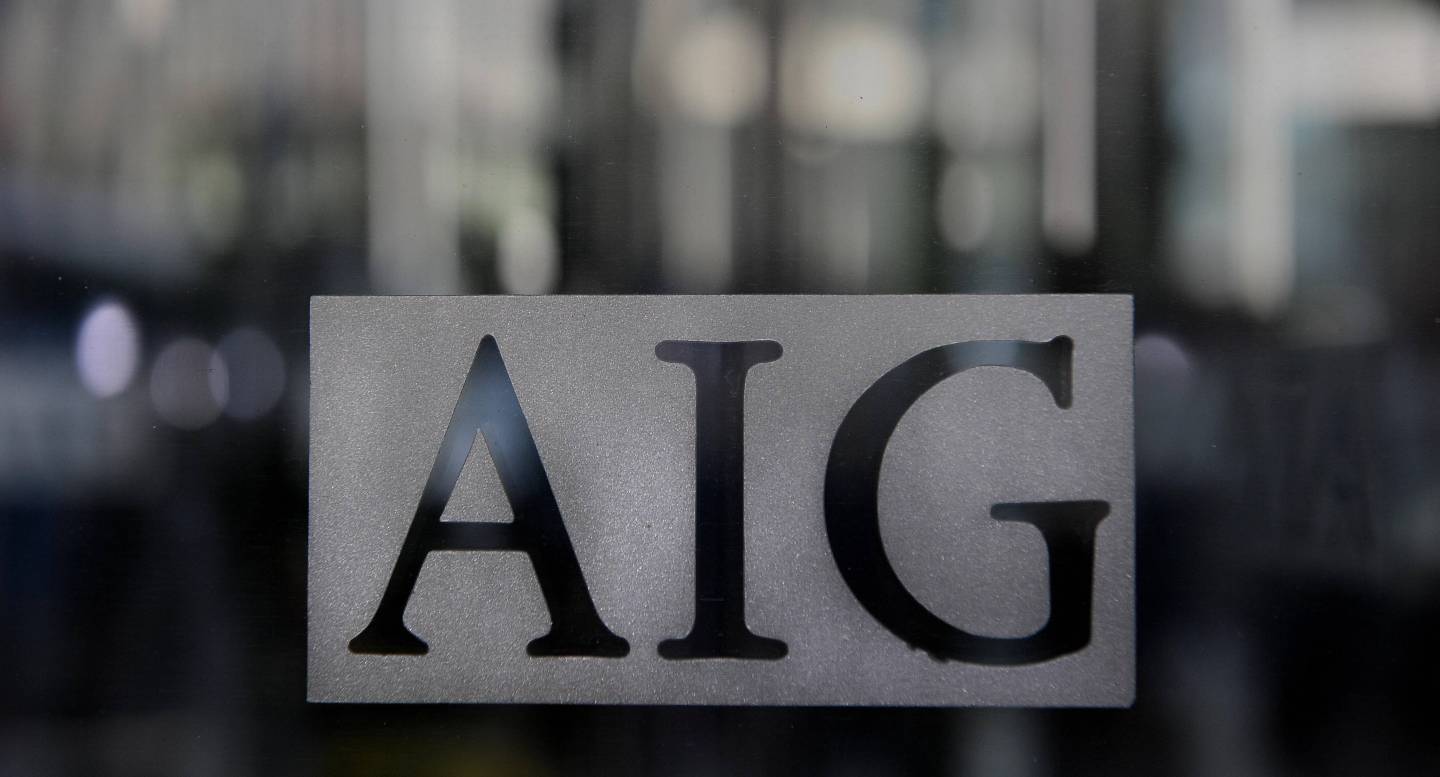 Logo of troubled insurer American International Group Inc. September 17, 2008 on a window at their office in the lower Manhattan area of New York.The US Federal Reserve pumped 85 billion dollars into AIG to stop the US insurance giant joining the Wall Street scrap heap, but stock markets were on edge on persistent fears over financial groups. The rescue, which gives the US government a 79.9 percent stake in American International Group, pushed Asian and European stock markets higher, but European markets then switched back into weak and volatile mood. AFP PHOTO/Stan HONDA (Photo credit should read STAN HONDA/AFP/Getty Images)
Photograph by Stan Honda — AFP/Getty Images

On Tuesday, insurance giant AIG announced a plan that will slim down the company slightly and pledged to return $25 billion of capital to shareholders over the next two years. The plan is meant to counter Carl Icahn, who has a 2.5% stake in the company, is looking for a breakup, and has called AIG “too big to succeed.” Late on Tuesday, Fortune talked to AIG CEO Peter Hancock about the proposed plan, and why he thinks it better than splitting up the company. Here an excerpt from the interview:

Q. Carl Icahn’s returns, and activist and hedge funds in general, haven’t been that great lately, and Icahn has been known to make demands but then just go away. Are you being pushed to make changes you don’t want to make?

A. We have a lot of shareholders who are very interested in us delivering on these plans. Some shareholders get more attention than others. But this plan is an extension of changes we have already started, just adding specificity and urgency to that. There’s $25 billion of additional return of capital to shareholders over the next two years. The cost initiatives, the ROE [return on equity] progress especially on the core operating businesses, and the clarity that comes from segmenting the legacy are all things that we think are going to help all of our shareholders do a better job of evaluating how we are delivering on progress. We are reshaping the company. Don’t get me wrong. We don’t think the company is perfection.

Q. Have you heard from Carl Icahn? Sounds like he is not going to be happy until you have a breakup plan. Is that how it sounds to you?

A. I have not heard from Carl, and I don’t want to judge his reaction at all.

Q. What about other shareholders? What has there reaction been?

A. In terms of other shareholders, we have focused today on Wall Street analysts. We start our outreach to investors tomorrow. And will have a better idea. I like the price action in the shares today.

Q. Why is the plan better than a breakup?

A. Start with the basic premise of what is an insurance company. We take our clients’ risks, aggregate them and mutualize them. Diversification, across property and life and casualty and retirement, is by far the most efficient way to manage that risk. If we were to split, you would not be able to return nearly as much capital to shareholders. And on top of that you would have tax friction of about $1.3 billion per year because you would not be able to use the foreign tax credits optimally. So it’s a pretty high hurdle to clear to say that a split would be the way to unlock value based on what I think is a false premise that we would no longer be a SIFI [Systemically Important Financial Institution] if we were broken up and that the designation is burdensome anyway.

Q. MetLife is splitting to avoid being a SIFI? Why do you think they came to a different conclusion?

A. They have a very different balance sheet. They have many more assets, almost twice as much leverage, and twice as much exposure to variable annuities. All of that creates greater vulnerability to the stress tests. You have to look at each of the bank and non-bank SIFIs and the capital and cost constraints that come from the designation and ask yourself, is a top five or top 10 or top 15 priority… It’s really institution-specific.

A. We care very much about our financial strength because we are in the business of making long-term promises to our policyholders. But I think that the biggest concern is more around the uncertainty that comes from activism as opposed to this plan. This is a balanced plan that recognizes that the diversity of our businesses is critical in the eyes of the ratings agencies.

Q. Have you heard from the ratings agencies on whether this plan would hurt your credit rating?

A. We have a continuous dialogue with the ratings agencies, our regulators, the Fed, all of the people who are careful to make sure we are managing the financial strength of the company.

Q. And have the ratings agencies said whether they would lower your rating on this?

A. I won’t comment on anything that they say. You should speak to them. All I would say is we have issued this plan with a dialogue with all of those stakeholders.

Q. The metrics you announced—you said you are going to increase your returns pretty significantly and lower your loss ratios—were met with some skepticism from some analysts.

A. Analysts are paid to be skeptical. We brought our loss ratio down in 2011 and 2013, and the analysts were pretty darn skeptical that we could do that. It’s flattened out a bit in the subsequent years. But we have been building the tools and training the underwriters to do the next phase, which will allows us to more surgically select which risks we want to take on and which ones we want to walk away from.

Q. On the conference call, you said that you haven’t had great performance from your hedge funds. A little more than a year ago, Calpers, the giant California pension plan, said it was getting out of hedge funds. Is that something you are thinking about as well?

A. We have had excellent performance over the long run from hedge funds. But our outlook for hedge funds is much less enthusiastic than it used to be. We have about $11 billion in over 100 hedge funds. In the future, we will have a much reduced allocation to that sector and more focused on the strategies that we think have a chance of succeeding in this new era of monetary policy that is very different than we have had in the past.

Q. You have defended spending money on research and development. R&D is not something you think about when you think about insurance. How important is that to AIG’s future?

A. It’s critical. No large enterprise today is going to succeed unless it does a good job of understanding the wealth of data it has. And there’s no insurance company in the world with the scale and diversity of data that we have. This is an industry that has underinvested in R&D and, as one of the largest players in the industry, we have fabulous scale advantage. And the techniques of how you can use data cut across conventional boundaries in insurance and cut across geographic borders. This is one of the areas where we think we are far stronger together.