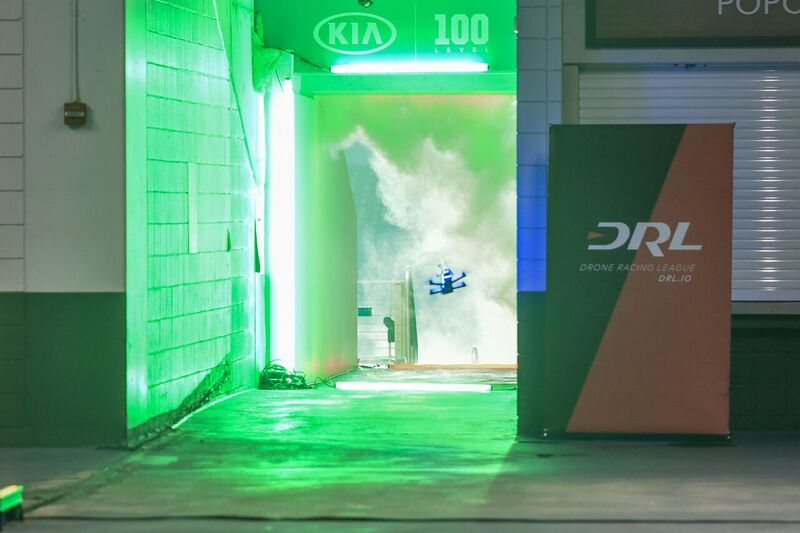 Three of the most popular sectors of technology are converging with the Drone Racing League (DRL), which combines drones, virtual reality, and video games. The first season of DRL is officially underway with six events across the globe, ranging from the Miami Dolphins NFL Sunlife Stadium to the abandoned Hawthorne Mall in Los Angeles.

Other locales for events include Detroit, MI, Auckland, New Zealand, and Mexico City according to Nicholas Horbaczewski, DRL founder and CEO. He says the league has received offers from multiple cities and is currently negotiating for the remaining events.

“Every event will have a different venue and a different feel, which allows for compelling race tracks and different challenges for the pilots,” Horbaczewski says.

Each event will field 12 pilots from around the globe with the top six moving on to the next event. DRL is focusing exclusively on digital distribution for this league, which won’t be livestreamed. Instead, each event will be filmed and then packaged for digital consumption a few weeks later across outlets like Facebook (FB), YouTube (GOOG), and the DRL website. Horbaczewski says additional outlets could be added in the future. Allen Debevoise, founder of YouTube channel Machinima, is one of the investors in DRL.

For more on new drones uses, watch this Fortune video:

Horbaczewski says this allows his production team to experiment with the best angles to bring the miniature drones to life for fans. The Feb. 22 launch of the league’s first season was actually filmed last December in Miami. The media cut of the races will be similar to what fans of Formula 1 and NASCAR racing see on a typical weekend.

“An event is made up of many races and any one race is only a few minutes long, so it’s bite-sized content and perfect for online consumption,” Horbaczewski says.

Most pilots today use virtual reality headsets to control their drones, so VR has become part of the hobbyist community and in turn, part of DRL. Owners of virtual reality headsets will be able to choose from what Horbaczewski calls a “co-pilot” view, which offers a fixed-camera, first-person perspective as the drones navigate the tracks at speeds of up to 80 miles per hour.

In addition, beginning with the mid-March event, the league is adding 360-degree cameras to the mix and will experiment with additional angles for the virtual reality audience, including aerial 360-degree perspectives. Horbaczewski says a documentary series is being filmed to give fans an inside look at how everything is being put together.

There’s also a video game component of DRL. In fact, they purposely call each event a “level,” and that connects with a free online game on its website that expands with each event. DRL currently has a playable level of the abandoned warehouse in Yonkers, NY that’s known as the “gates of hell.” The league did some test races at that location last year before officially beginning the competition in Miami.

“Level 1: Miami Lights” will be available as both a video experience and a video game on Feb. 22, with each subsequent level bringing more gameplay. Horbaczewski believes there are additional video game opportunities for the league in the future. One of the company’s investors is Strauss Zelnick, CEO of Take-Two Interactive Software, which owns 2K and Rockstar Games.

“When we think about drone racing, it’s a real-life video game experience that blends the virtual and real together,” Horbaczewski says. “Our goal is to expose as many people to Drone Racing League as possible, and 360-degree VR and video games are part of that plan.”

Horbaczewski says a live audience will be added to these events by late 2016 or early 2017. The initial Miami event had pilots, friends, family, and press attend.

“Our focus right now is on putting on great racing events and creating great media, but it’s incredibly compelling live,” Horbaczewski says. “We had over 100 people that came to watch the racing and it really works as a live event.”

This California Vineyard Is Using Drones to Make Better Wine

Another element of traditional sports that will be incorporated into DRL this season is sponsors.

Market research firm Frost & Sullivan forecasts hobby drones are on pace to become a $4.4 billion market by 2020, so there’s a growing audience out there.

Horbaczewski says a growing segment of that audience had been experimenting with drone racing at one-off gatherings in countries around the world over the past few years.

“When you see it now as a hobby with people building drones and going out into fields, we thought it could be something entertaining and interesting to people who love drones,” Horbaczewski says.

Venture capitalists agree, and see an even larger potential audience for what Horbaczewski calls “the sport of the future.” DRL has a growing foundation of investors joining RSE Ventures to support R&D and the rapid scaling of the league, including CAA Ventures, Hearst Ventures, Lerer Hippeau Ventures, Lux Capital, Courtside Ventures, and Gary Vaynerchuk with Vayner/RSE.