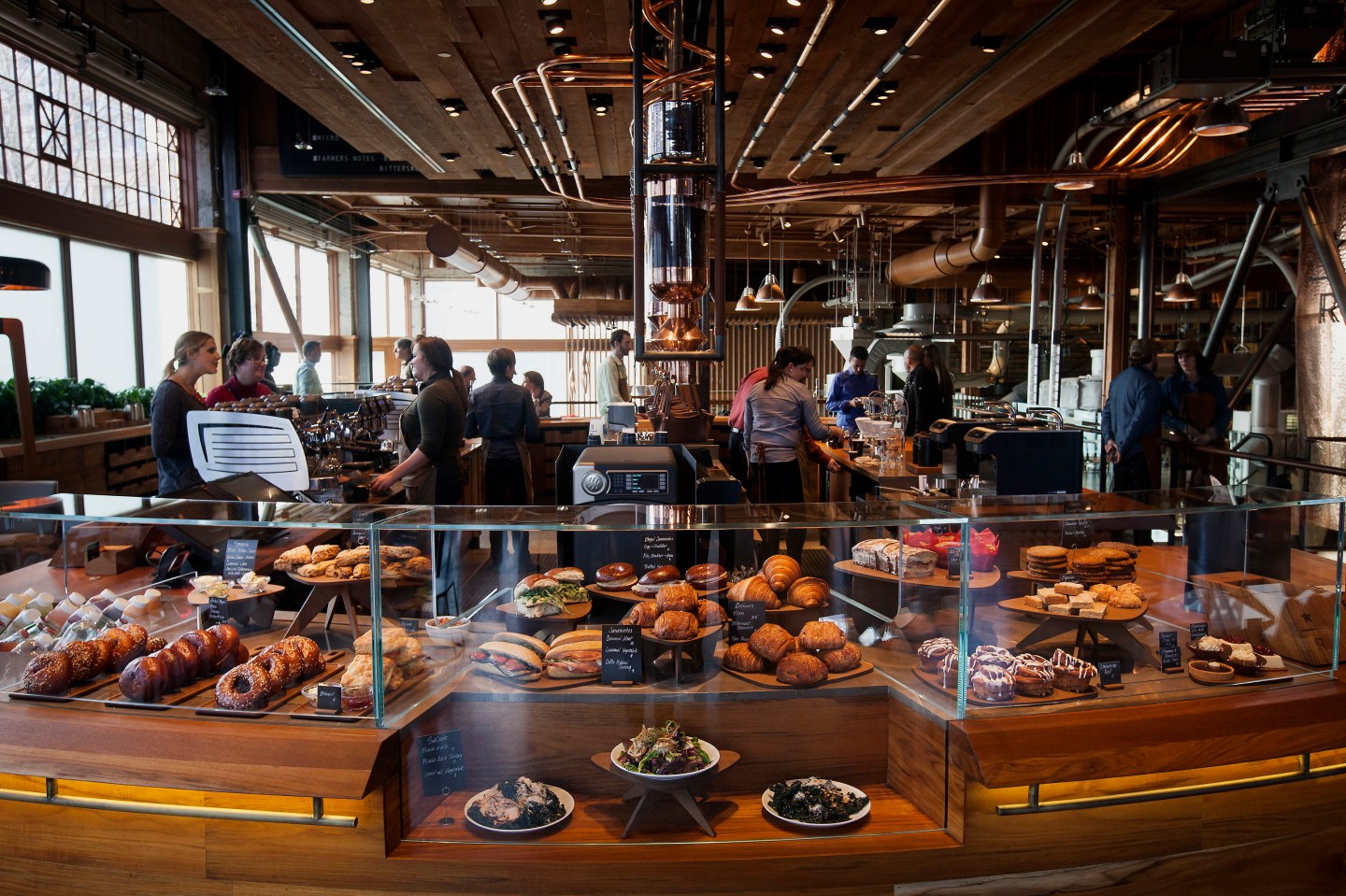 Food sits on display as employees work behind the counter at the Starbucks Corp. Reserve Roastery and Tasting Room in Seattle, Washington, U.S., on Wednesday, Dec. 3, 2014. The store is a 15,000-square-foot facility that combines a cafe with a coffee bean roastery as the chain boosts production of its Reserve line of premium coffee. Photographer: David Ryder/Bloomberg via Getty Images
Photograph by David Ryder — Bloomberg via Getty Images

Nearly three out of every four dollars that Starbucks generates in revenue comes from the sales of coffee, teas and other beverages sold at the company’s restaurants. But the real star performer of late has been the cuisine.

Starbucks President and Chief Operating Officer Kevin Johnson told investors that while beverage innovation and sales of the Teavana brand of teas each contributed one point of U.S. same-store sales growth during the latest quarter, food sales were even strong.

“Food revenue was up nearly 20% over last year, contributing 3 points of U.S. comp sales in the quarter,” Johnson said.

That’s a huge lift for a business that has historically only contributed to around 20% of sales. Notably, breakfast sandwich sales were up more than 40% from a year ago.

Starbucks in 2014 outlined a plan to double sales from the company’s food business in the key U.S. market, hoping to get annual revenue from food in the domestic market to reach more than $4 billion by fiscal 2019.

When an analyst asked about the impressive food sales numbers that Starbucks presented, Johnson said the coffee company was using its mobile app to lure in customers to try its breakfast offerings, which include bistro boxes, breakfast sandwiches, and oatmeal. Giving customers an incentive to try the breakfast menu led to repeat business.

While investors were a bit disappointed in the sales growth that Starbucks (SBUX) reported in markets abroad, global same-store sales climbed 8% to lift fiscal first-quarter revenue to a record $5.37 billion.

The Americas business was the most impressive. Same-store sales in that region grew 9%, better than the 7.7% growth projected by analysts surveyed by Consensus Metrix. Notably, the strong sales indicate that a controversy that brewed during the holiday season involving the company’s red cup design failed to dent sales.

Another notable update that Starbucks provided involves the brand’s involvement with Keurig’s (GMCR) K-Cup system. Since Keurig announced it would sell itself for $13.9 billion to German conglomerate JAB Holding Company in December, questions have been raised about the future relationship between the coffee companies.

Starbucks CEO Howard Schultz reassured analysts and current Keurig customers that Starbucks-branded coffee would remain an offering on retail shelves. However, he indicated that Starbucks could pursue its own plans in the single-serve coffee making arena down the road.