Pope Francis Says Your Texts Are a “Gift of God” 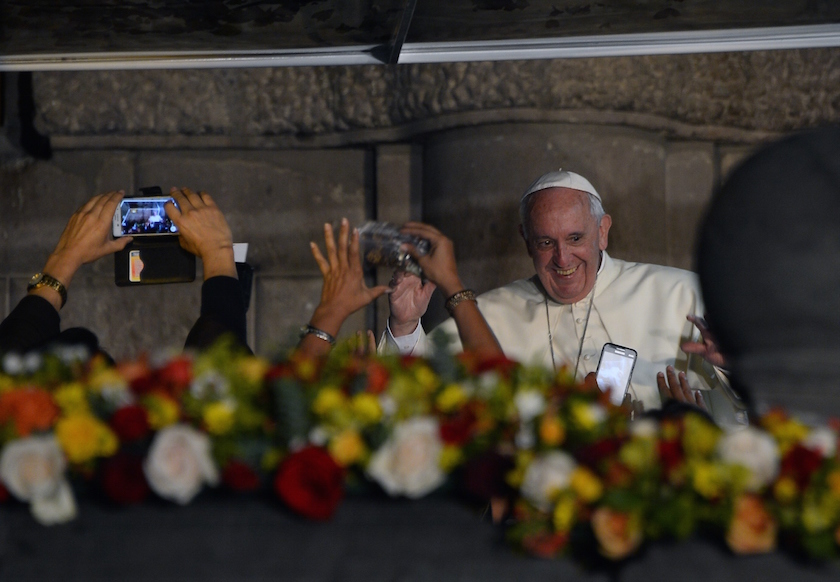 Pope Francis waves as he arrives in the popemobile to San Francisco church in Quito, on July 7, 2015. Pope Francis addressed 900,000 faithful who braved the cold and rain to hear him at an outdoor mass in Quito's Bicentennial Park. "Fight for inclusion at all levels," the pontiff said, pleading for "dialogue" on the third day of a South American tour that will also take him to Bolivia and Paraguay. AFP PHOTO / JUAN CEVALLOS (Photo credit should read JUAN CEVALLOS/AFP/Getty Images)
Photograph by Juan Cevallos — AFP/Getty Images

Pope Francis, who has acknowledged being “a disaster” when it comes to technology, said on Friday that the Internet, social networks, and text messages were “a gift of God” if used wisely.

“Emails, text messages, social networks and chats can also be fully human forms of communication,” the Pope said in his message for the Roman Catholic Church’s World Day of Communications.

“It is not technology which determines whether or not communication is authentic, but rather the human heart and our capacity to use wisely the means at our disposal,” said.

Last year, the 79-year-old Francis told a young girl he was embarrassed to admit that he did not know how to use computers and was an overall “disaster” with technology. He has also said smartphones should be banned from the family dinner and children should not have computers in their rooms.

Whether by divine providence or human coincidence, Francis’ message was released as he was meeting with the head of a company whose brand is synonymous with those products—Apple (AAPL) CEO Tim Cook.

In his message, the Pope appeared to take a more conciliatory stand towards modern technology than in the past, saying “the Internet could be used to build a society which is healthy and open to sharing.”

“Social networks can facilitate relationships and promote the good of society, but they can also lead to further polarization and division between individuals and groups,” he said.

Modern communications were “a gift of God which involves a great responsibility,” he said. (Reporting By Philip Pullell