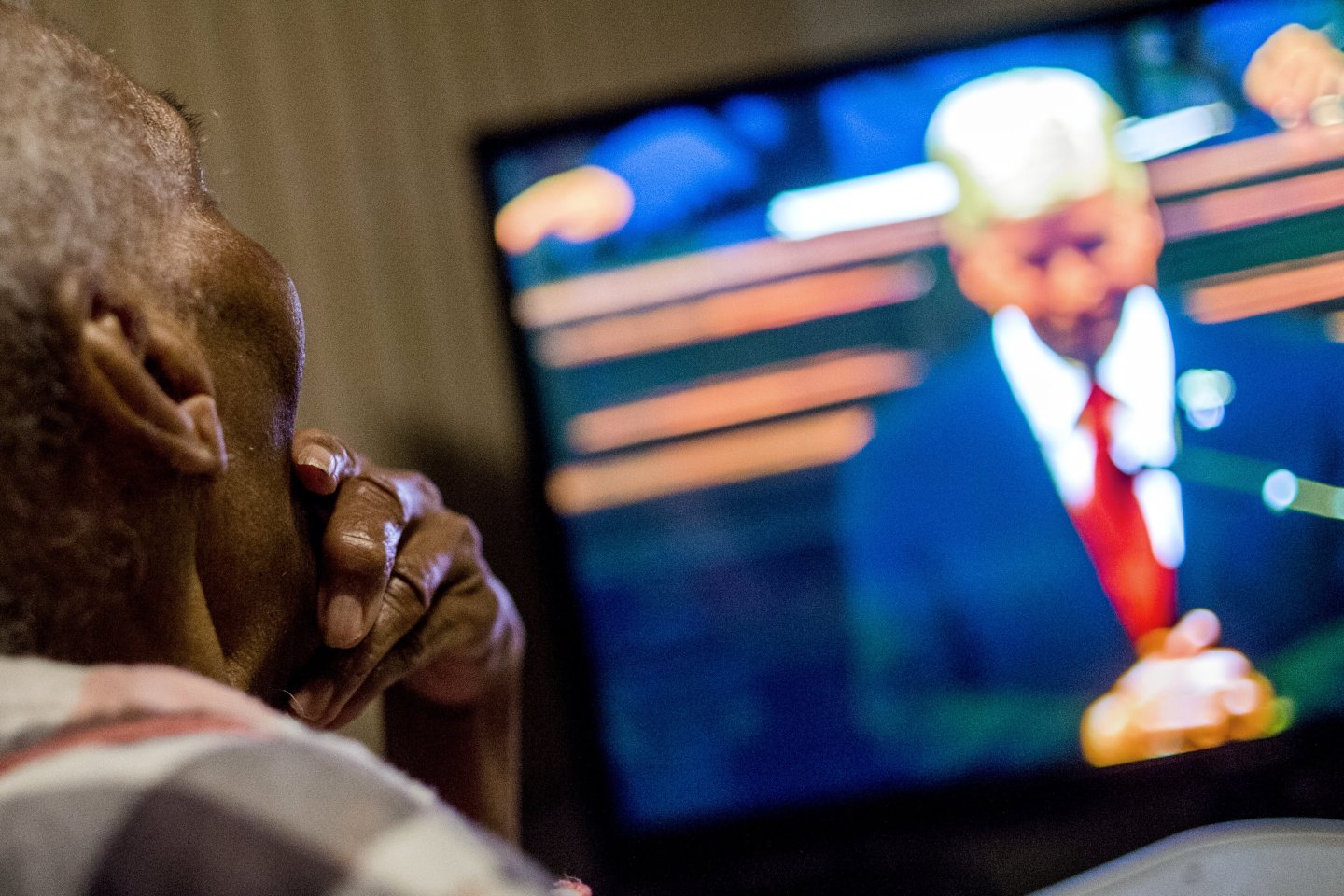 Flint resident Ollie Peterson, 87, strokes her chin while listening to Michigan Gov. Rick Snyder deliver his State of the State address on television Tuesday, Jan. 19, 2016, at their home in Flint. Peterson watched the governor speak with her husband David, 89, in hopes to hear his plan for resolving the Flint water crisis. (Jake May/The Flint Journal-MLive.com via AP) LOCAL TELEVISION OUT; LOCAL INTERNET OUT; MANDATORY CREDIT
Photograph by Jake May — AP

In his 2016 State of the State address on Tuesday, Governor Rick Snyder of Michigan offered a textbook example of the good, the bad, and the ugly when it comes to apologies from leaders.

His response to the greatest crisis of his tenure—the contamination of the drinking water in the predominantly African-American town of Flint—holds profound implications for leaders in every field, not just politics.

Let’s look closely at what Governor Snyder said and what it really meant, starting with the beginning of his speech.

“I will address the crisis in Flint first and in depth.”

This is promising. What started as a local story soon became national news, and it would have been foolish to bury his response in the middle of the speech (or, as President Clinton did at the beginning of the Lewinsky scandal, wait until the end of a press conference—and then lie on top of that).

Even putting the crisis front and center, though, doesn’t address the more fundamental question: Why did the state’s top leader wait so long to speak up?

The city of Flint changed its water source from Detroit to the Flint River in April 2014, and a month later residents complained about their water’s smell, look, and taste. In October 2014 GM decided to stop using it in their engines to avoid corrosion. And in February 2015, the Environmental Protection Agency told the governor about the high levels of lead it found in the Flint water supply. But Governor Snyder did nothing.

Taking this history into account, Governor Snyder’s apology is already off to a bad start. C-suite executives and other managers would do well to think about Snyder’s predicament when they consider delaying a meaningful response after a crisis erupts.

Excellent. You’d think that taking responsibility would be de rigueur for someone in the governor’s position, but too often this isn’t the case.

Consider, for example, how BP CEO Tony Hayward responded when the worst oil spill in history occurred on his watch. Although the Deepwater Horizon rig that exploded in the Gulf of Mexico was licensed by BP, Hayward said, “The responsibility for safety on the drilling rig is Transocean [sic]. It is their rig, their equipment, their people, their systems, their safety processes.”

As I note in my book Ethical Intelligence, BP eventually accepted the blame for the catastrophe, but not before a mountain of evidence made it impossible for them to deny their culpability. For years to come, this will be the platinum standard for how not to apologize for one’s mistakes. Leaders of all stripes would do well to remember this one.

“No citizen of this great state should endure this kind of catastrophe. Government failed you…by breaking the trust you placed in us. I’m sorry most of all that I let you down.”

It’s stating the obvious but still worth including. “When people who have been wronged don’t have their anger and the situation acknowledged, they lose trust in their leaders, and that’s difficult to regain,” notes Ron Karr, author of Lead, Sell, or Get Out of the Way: The 7 Traits of Great Sellers.

“You deserve to know the truth, and I have a responsibility to tell the truth, the truth about what we’ve done and what we’ll do to overcome this challenge.”

Mere words, yes, but important ones, and the governor goes on to state that citizens will be able to review his emails from the past two years on the state’s website. He also talks about bringing in new leadership to the Department of Environmental Quality, holding accountable “those whose mistakes contributed to this disaster,” and cooperating with investigations.

Devising a strategy for righting one’s wrongs is a necessary (but not sufficient) component of an ethically intelligent apology.

“I know apologies won’t make up for the mistakes that were made.”

Here we have the best and worst elements of an apology all in one compact sentence. In the first part, Governor Snyder correctly states that for his apology to be meaningful, he has to take action.

But he should have reworded the second part, which is most famously associated with President Ronald Reagan’s 1987 State of the Union address. The President said that in the Iran-Contra scandal, “Mistakes were made.” That’s rightly known as a “non-apology apology” because it’s in the passive voice, which thereby absolves the speaker of any responsibility. It’s particularly bizarre to hear it in the governor’s speech at this point, since he has already claimed the buck stops with him.

“Let me be perfectly clear to all of state government: In situations like this, they must come to my desk immediately, no delays, no excuses, period.”

This forceful statement is ruined by its first five words. No leader, especially a government official, should ever utter them, given how they’re inextricably linked to President Richard Nixon and Watergate. When a politician utters this phrase, many listeners think, “What I’m about to hear is a lie,” even if it isn’t.

In addition to what the governor said, there’s the matter of how he said it. Is it asking too much of the state’s highest official that he speak convincingly, from the heart, rather than reading a script seemingly for the first time? No one expects every civil servant to be a Hall of Fame member of the National Speakers Association, but if wide swaths of the people you serve have lost faith in your ability as a leader, it’s in your own interest to practice your apology ahead of time and deliver it with sincerity.

Vermont governor Bernie Sanders has called for Snyder’s resignation. Flint native Michael Moore has gone a step further and said that Snyder should be prosecuted. Whether or not Governor Rick Snyder faces prison time or an early retirement, his apology won’t be worth the paper it was printed on if he fails to make good on his promises.

As I teach in ethics seminars to business leaders, there are two crucial components to crisis management: nipping problems in the bud before they blossom into full-scale crises and, if you do wait too long, being prepared to take full responsibility and clean the mess up.