What Obama Will Find at the Detroit Auto Show 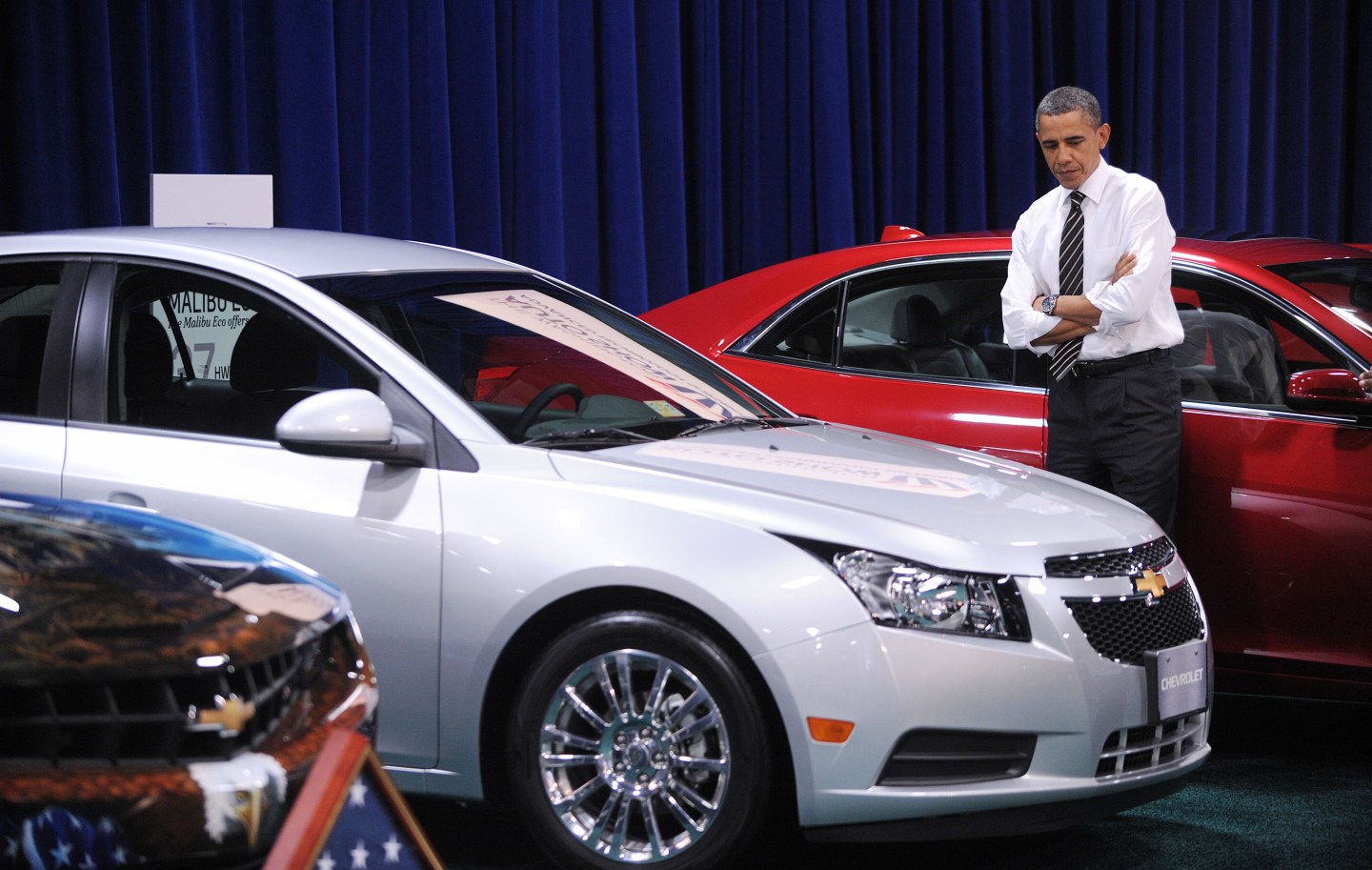 WASHINGTON, DC - JANUARY 31: (AFP OUT) U.S. President Barack Obama looks at a Chevrolet Malibu during a visit to the DC Auto Show at the Convention Center January 31, 2012 in Washington, DC. Obama touted his bailout of General Motors and Chrysler three years ago. (Photo by Olivier Douliery-Pool/Getty Images)
Photograph by Olivier Douliery — Pool via Getty Images

President Obama is set to visit the North American International Auto Show in Detroit today, and it’s been called a victory lap. The auto industry had record sales in 2015, a resurgence he credits to his bail out of the industry. The auto industry’s revitalization is on clear display at this year’s Detroit Auto Show, too.

Here are some highlights:

The new Mercedes-Benz E-Class:
Dr. Dieter Zetsche, Mercedes Benz Chairman of the Board of Management, attends the Mercedes-Benz new E-Class introduction prior to the opening of the North American International Auto Show in Detroit January 10, 2016.Photograph by Gary Cameron — Reuters

With Drive Pilot, which can maintain lane position and distance from other vehicles at speeds up to 120 mph, remote parking and a smartphone-key fob replacement solution—to name but a few—it’s fair to say it is among the most advanced passenger vehicles to date. Appropriately, Mercedes invited MIT professor Dr. Andrew McAfee to help unveil it with a TED-like talk about the car’s underlying brainpower along with a message that AI won’t overtake humans anytime soon.

The new Audi A4:
Audi introduces the A4 Allroad Quatro at the North American International Auto Show on January 11, 2016 in Detroit, Michigan.Photograph by Scott Olson — Getty Images

One of the company’s most important volume vehicles, it uses a platform you can expect to see elsewhere within Volkswagen Group (VLKPY).

If it has half the capabilities and refinements of its XC90 SUV sibling (and it does), then the Chinese-owned Swedish safety brand (VOLVY) likely has another hit on its hands.

This sedan has enough imaginative and luxurious features to go up against Audi (AUDVF), Lexus, Cadillac, BMW (BMW-HM) and others. And Hyundai (HYUNDAI-MOTOR) made it clear with its Genesis G90 sedan that it is serious about creating a separate brand around the Genesis name. To help build out that plan, the company just hired Manfred Fitzgerald, the former head of design and marketing (yes, you read that correctly) for Lamborghini.

If anyone has been secretly yearning for some good old performance beasts in a sea of plug-in hybrids and EVs, Detroit didn’t disappoint.

Ford’s aluminum Raptor and V6 Sport Fusion are both destined already to be fan faves just from their stats. BMW’s M2 may finally match the original M3 for sheer slim-bodied, nimble, all-out performance dominance. And Lexus, ever cautious to come to market too quickly with a new model, finally revealed its LC 500 flagship coupe, a $100,000 sports and luxury two-door that promises to put “sexy” and “sporty” squarely onto the list of adjectives used to describe the brand.

In a different, more exotic corner of throwback high-performance fun, former General Motors vice chairman Bob Lutz and former Fisker Automotive CEO Henrik Fisker unveiled the Force 1, a 745-horsepower V10-powered two-seater (based on a Viper). The duo plan to make 50 to 100 of at a cost of $268,000.